Brady-Howard: A passionate educator runs for School Board 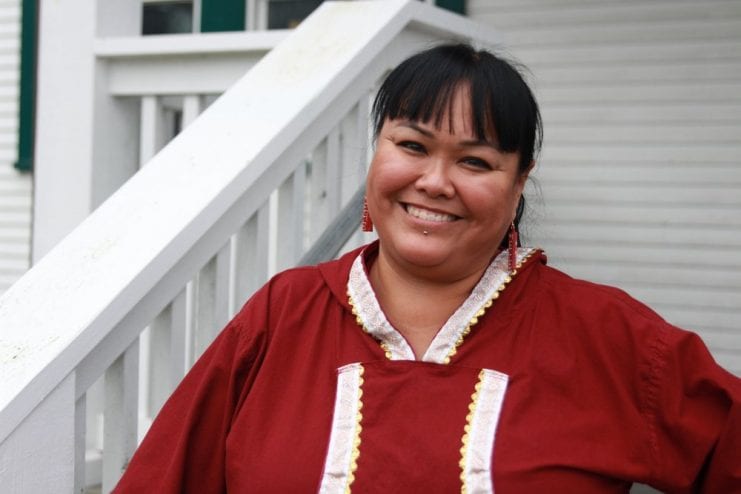 Brady-Howard has served on the board for a year. She doesn’t see the service as thankless. “The thanks come in small gestures,” she says. “You might not need a plaque or an award, but sometimes that simple thank you for something helps get you through the day.” (KCAW photo/Robert Woolsey)

Sitka has two candidates for school board this year: one a student and the other a teacher. Dionne Brady-Howard is a lifelong Sitkan who has taught Social Studies at Mt. Edgecumbe High School for 16 years. The one-year incumbent wants to bring the passion of an educator to school policy.

Note: KCAW will publish profiles of all candidates — both school board and assembly — prior to the October 3 municipal election.

Dionne Brady-Howard is well-known to many in Sitka. Her family has played a prominent role in the cultural life of the community, and in tribal politics.

Much of her history is entwined in her name.

“…Yeidikook’áa… In Tlingit tradition, you can give your name and anyone before, who would have been really well-versed in our culture, would have known a lot just from the name.”

But Brady-Howard is not running on her name: She’s running on commitment. She applied to fill the vacancy left last year by departing school board president Tim Fulton, saying she wanted to bring the perspective of an educator to the board.

That remains true as she seeks her first full term.

“As a lifelong Sitkan I believe firmly in the power and responsibility that a community has for public education, and the reciprocal relationship between a community and its schools.”

The reciprocal relationship is the idea that schools ultimately create better citizens, and a better society. Brady says this is why she chose to serve on the board.

“Sitting through three-hour meetings twice a month is a little less painful when you feel so passionately about something.”

Brady-Howard began her career in education shortly after graduating from Sheldon Jackson College in 1998. Unable to land a Social Studies job in Sitka after completing her student teaching, she went to Alaska’s Interior, where she worked as an itinerant for two years, swinging through communities that lacked a full-time Social Studies teacher.

She took her current job at Mt. Edgecumbe High School — her alma mater — in 2000.

Brady-Howard says her appointment to the board last year was like “diving into the deep end of the pool.” The advice from the Alaska Association of School Boards conference was to spend her year listening and learning. Now, she feels more ready to contribute to board policy.

And that includes supporting education standards.

“I think we’re in the unique position of trying to balance the tradition our nation has of local control over education, with the notion of what they were trying to accomplish with Common Core, which is: Holding districts nationwide accountable for a certain degree of minimum skills that students should have by the time they graduate from school. So that a high school diploma in Maine means something similar to what it would mean in Texas or California or Alaska.”

Brady-Howard feels many people mistakenly view Common Core as an attempt to “indoctrinate” students with an identical curriculum, but she notes “it’s not a curriculum at all, it’s a set of standards of knowledge and skills.”

Nevertheless, Brady says, as a teacher she finds some of the standards “really unwieldy.”

Nor are standardized tests to her liking, especially during the years of the Bush Administration, when No Child Left Behind imposed draconian remedies on schools that failed to measure up.

“The idea of just judging a school, and thereby its teachers, on how well kids are performing on tests was pretty offensive to me as an educator.”

Brady-Howard believes tests miss the point of education, and fail to account for much that makes students successful.

“One of the things that I’ve noticed when I’m trying to help a student who’s struggling in my class, is the best thing that I’ve learned to do to help them achieve their goals of passing my class and gaining the skills they need to have to be successful in high school — and hopefully also in life — is to see the student as a whole person. As a well-rounded individual who isn’t just being measured by their score on a test.”

Although Brady-Howard teaches at Mt. Edgecumbe — a state run school — she’s invested in the local district. She has and eighth-grader and a senior in the schools. She says she was discouraged by rhetoric in Juneau last year that public schools weren’t a good value, or that that the state’s education problems couldn’t be solved by “throwing money at them.”

Brady Howard knows that education funding — like everything else in the state budget — is going to be carefully scrutinized in the coming year. But she wants legislators to understand what’s at stake.

“As we continue to use up our non-renewable resources, we’re going to need people who are well-educated, innovative, who’ve been given the critical thinking skills bestowed in a quality education, to tackle these problems and these issues.”

And then there are the perks of being on the school board — which is uncompensated. Last year Brady-Howard’s daughter attended a meeting with her on “School Board Appreciation Day,” when local a local business gave a box of chocolate to each board member. Hours later at home, her daughter said “You should get chocolate every school board meeting!”