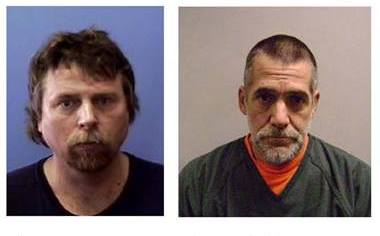 According to documents in  Lake and Discher’s public court file, the arrests came after Sitka Police received a tip from the Coast Guard Investigative Service in Seattle. The tip alleged that the two men were attempting to traffic ¼ to 1 pound of heroin. The drugs were hidden in a vehicle on an Alaska Marine Lines barge bound for Sitka.

The vehicle, a 1996 white Chevy pickup, arrived in Sitka on September 18. Lake, Discher and a relative of Discher’s arrived to pick up the vehicle. Sitka Police observed Discher driving the vehicle off the property. An officer then pulled Discher over and searched the vehicle, finding heroin and meth concealed in the air filter under the hood of the truck. The officer also found smaller amounts of heroin, meth and paraphernalia hidden throughout the vehicle. Discher and Lake were then arrested.

In total, officers recovered 132 grams of heroin and 107 grams of methamphetamine. According to a narrative, written by Officer Gary Cranford for Sitka Superior Court, the drugs had an estimated street value of $153,400.

In addition to the two Class B Felony charges leveled against each defendant, Lake and Discher each received two Class A Misdemeanor charges for Misconduct Involving a Controlled Substance in the Fourth Degree. Bail for Lake and Discher was set at $50,000.