Births to continue at Sitka Community Hospital, for now 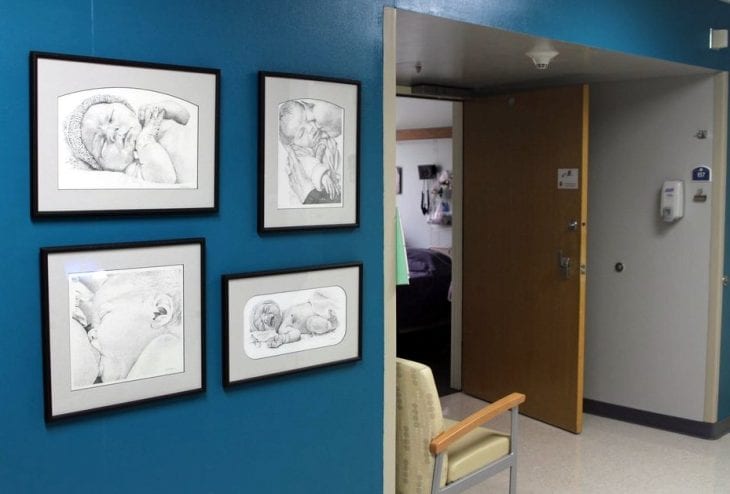 Art on the wall outside Sitka Community Hospital’s labor and delivery rooms. The hospital will retain its obstetrics program in the short term, although the administration hasn’t written it into the current budget. (KCAW file photo)

The board of Sitka Community Hospital on Thursday (9-28-17) postponed action on closing its obstetrics program until it receives a detailed financial analysis.

Meanwhile, the administration of the hospital now favors keeping ‘round-the-clock surgical coverage, but under a different model than the past.

The next Sitka Community Hospital Board meeting is scheduled for Thursday, October 26, in the lower level classroom at the hospital.

During budget discussions earlier this year the administration of Sitka’s local hospital proposed ending childbirth and 24/7 surgical coverage as of the end of the first quarter of 2018.

Both proposals triggered a serious discussion about the future role of the hospital, and some pushback — including one former doctor’s decision to run for an assembly seat this year.
But the hospital’s financial office has been short-staffed due to illness recently, so the move to close OB has now been delayed for at least a month or more, while the hospital board awaits more information on the cost benefits.

Nevertheless, the hospital board at its last meeting (9-28-17) had an extensive conversation about the service. Board member Connie Sipe took the pragmatic corner.

“The trend is we’re aging. We’re not reversing that trend. It’s not going to change. If we lose 30 families a year because they can’t give birth here and they stop coming to Mountainside, that’s not great. But do you know what that is? That’s seven-tenths of one-percent of our population. A third of them (or maybe half) were probably Coast Guard and weren’t going to be here in five years anyway. And what our population is, and where the need is, is aging in this community. And maybe we just can’t have a dilution of all of OB between two providers when we have other pressing, pressing needs for chronic care, for elder care, and cardiology care, and other things that we need. And the idea of somehow trying to convince people — for me it’s a practicality decision rather than one based on studies.”

The proposal to end medical OB services has kick-started a conversation in the community about whether the hospital should establish a birthing center, or a midwife-run OB clinic.

The hospital board did not appear to warm to the idea, mainly because their providers haven’t. Roger Golub is a staff physician. He said that the hospital couldn’t create a program of any kind for only low-risk deliveries, without an agreement for someone else — like the Southeast Alaska Regional Health Consortium across the bridge — to take the high-risk deliveries.

“Until — and unless — you have SEARHC committed to that, the whole thing’s a non-starter.”

In any event, Sitka Community Hospital will continue with medical deliveries through the fall, with 24/7 surgical coverage provided by traveling doctors. The expense of obstetrics, hospital CEO Rob Allen told board members, was “of concern,” but the facility has had a strong month. In September all 15 of Sitka Community’s long-term beds were full, as were its 13 acute-care beds.

And the surgical model has actually worked well. Allen reported that the administration would now like to move ahead with recruiting a full-time surgeon to Sitka, who would be relieved for some period — one week per month, for example — by a traveling doctor.

The board was encouraged to hear that news, since the looming closure of obstetrics and surgery over the past few months has created instability, according to board president Bryan Bertacchi.

“The total uncertainty that we keep creating for the staff is just untenable,” he said.

On the question of whether SEARHC could back up Sitka Community if the latter opened a birthing center, Bertacchi suggested that CEO Allen go ahead and call the SEARHC administration and find out if they’d do it.

“Yes or no,” Bertacchi said, “It would really help us in our decision making.”