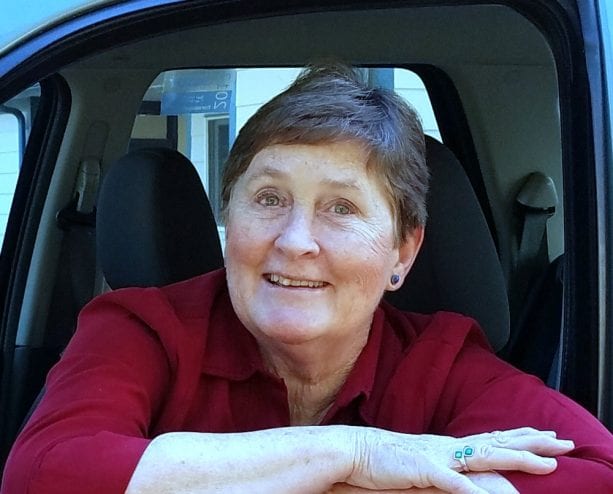 Finkenbinder says Sitka has “fantastic infrastructure for a town of 9,000.” Now, she’d like to distribute the expense of paying for that infrastructure over a larger population. “That’s my top priority: Let’s get more people!” (Sheila Finkenbinder photo)

Sheila Finkenbinder has never held elected office, but she has more political experience than any candidate running for the Sitka assembly.

A former legislative aide, former candidate for state office, and current chair of the District 35 Republican Party, Finkenbinder makes no secret of her solid conservative values. Nevertheless, she says her vision for Sitka is one of progress.

The municipal election in Sitka is next Tuesday, October 3. Polls will be open 7 a.m. to 8 p.m. All voting takes place at Harrigan Centennial Hall. Early voting is available now on the second floor of the city office building downtown across from Totem Square.

After nearly three decades living in Sitka, Sheila Finkenbinder believes she’s as qualified as anyone to serve on the assembly.

She has no axe to grind, and no agenda — even on the top issue on the Sitka assembly’s plate: Sitka Community Hospital.

“We’re a long ways from the solution, but we’re also closer to needing to have an answer. For Sitka Community Hospital. For its health.”

In some ways, she’s as fascinated as everyone else by the turns the hospital debate has taken. Her position now is: keep listening.

“Well we started with, Should the two hospitals cooperate? And after a year that suddenly went to, No, should we let SEARHC take over our hospital? And back to, Oh I guess this is really a bigger issue than maybe we were recognizing, and we need to step back and really survey the community and see how they’re feeling about it.”

Her strategy, if elected, is to keep the conversation on the hospital moving in a positive direction. Finkenbinder wants to contribute a more positive tone overall to municipal government. She does not want to be seen as a naysayer.

Small business development has occupied Finkenbinder’s attention for much of her life in Sitka. When she and her late husband, Ken, arrived in Sitka 27 years ago aboard their trimaran they set up a metal fabrication and repair shop. She later helped create and operate a nonprofit small business incubator called Sitka Works.

More recently, though, Finkenbinder’s been serving on the board of the Gary Paxton Industrial Park. She’s still new, and hasn’t really made her mark on that board, but its mission dovetails with her ideas about economic growth.

“If people can manufacture — and that can be on a small scale or large scale: salt on up — it brings dollars into the town, and that’s the kind of thing I’d like to see happening.”

As a former aide to Republican Representative Peggy Wilson, and a former Republican legislative candidate herself, Finkenbinder is quick with conservat ive doctrine, like “you can’t tax your way to prosperity.” But she also doesn’t want to see services and infrastructure in Sitka drift into neglect.

“We all clearly would like the best, but it’s constantly a balancing act. We no longer have a big industry here paying big salaries and big property tax to make us well off enough that we can simply have whatever we want when we want it. So we’re constantly having to balance what we can do with what we’d like to do. We’d love to have a new police department and public safety building. How can we pay for it? I’d love to have the street next to my house repaved. But as much as I want it, where’s the money?”

The answer for Finkenbinder is in expanding the tax base. That means more people to spread out the costs of government services.

“We’ve got a lot of great infrastructure for a town of 9,000 people. It’s pretty amazing. That’s really my priority: Get more people here!”

Finkenbinder says the real estate market is a good indicator that Sitka remains a desirable place to live. She disagrees with the perception that more people are leaving Sitka than coming in. Is it expensive? Yes. And Finkenbinder says Sitka is not alone.

“So we’re not the only people in the world who are living in a place that’s expensive. Nonetheless, we want to try to deal with that. To keep housing costs down, to keep utility costs down, but at the same time maintain our harbors, pave our roads, and all the other things that we need to be doing to make it nice to live here. We can’t just not pay the bills.”

Finkenbinder appreciates that living in Sitka can be a struggle. She’s putting up a cottage on her property in a personal effort to ease the crunch in rental housing. Yet in her travels she has never found any place quite like Sitka. “I’ve contemplated leaving,” she says, “but every time I do I end up becoming more invested in this community.”