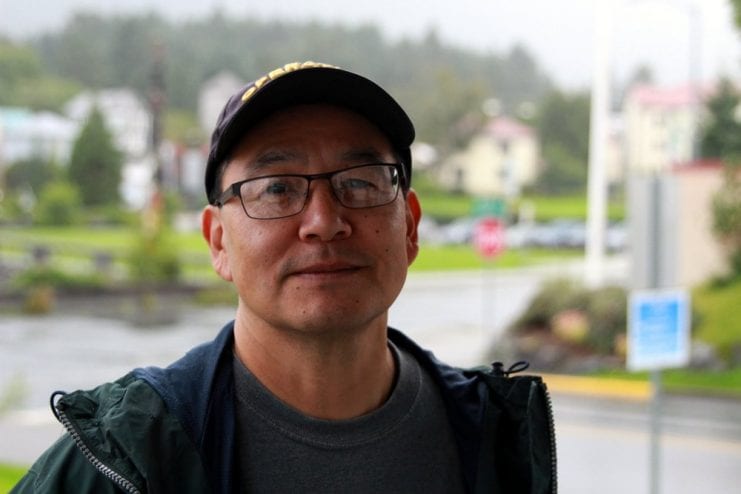 Ben Miyasato knows Sitka has immediate problems, but he wants the assembly to take the long view. “How will our decisions affect people down the road?” (KCAW photo/Emily Kwong)

Ben Miyasato wants to return to local government — but with a single focus on the Sitka assembly.

The municipal election in Sitka is next Tuesday, October 3. Polls are open 7 a.m. to 8 p.m. at Harrigan Centennial Hall.

For someone as understated as he is, Ben Miyasato can make waves. He served five years on the Sitka Tribal Council until this past January, when he spontaneously resigned in open session, saying he refused to be “muzzled” by council policies which interfered with his right to free speech.

Just a few months prior to this episode, Miyasato stepped down from his seat on the Sitka Assembly to run for mayor. He didn’t make it. Free of civic responsibilities for the first time in years, he says people never let him forget that he shouldn’t get too comfortable.

“I ran for mayor last year and I did not get elected. The one thing that helped get over that loss is that every single week since then people have been coming up to me and asking me to run for assembly.”

Miyasato considers it a compliment that people ask him this. The last year has been challenging for the 53-year old lifelong Sitkan. He was involved in the care of a terminally-ill brother. And governing even on the local level is demanding.

“I did both Tribal government and city government for three years. And for those who have never done it, it was all-encompassing. It was literally issues and decisions made every week. There comes a point where you just need to step back and take a breather.”

Miyasato is a career military veteran with 20 years in the Army National Guard, and it’s reflected in his decision-making style. For instance, while he appreciates that the current assembly has geared down the hospital issue to solicit more public opinion, he doesn’t want the process to be indefinite.

“I think the next step that they need to have regarding the Sitka Community Hospital is to make a decision. Make a decision that’s best for Sitka, and also best for the hospital.”

Miyasato won’t specify what that decision would be for him, if he’s returned to the assembly. He’s got positions — he’s pro-bulk water, fiscal stability, and affordable housing. He thinks recent rate increase have stressed people. But he has no agenda. He’s not walking around with his mind made up about anything.

“I do have the ability to go in there not with, This is how I’m going to vote. I want to read the issue. I want to listen to people. I want to be able to say that this is the decision based on what the people here in Sitka would like to see.”

Just as he did when he ran for mayor last year, Miyasato leans on the importance of experience when it comes to serving the interests of Sitka. He remembers a brand-new Centennial Building as a four-year old. He sees that structure and the library as examples of long-term thinking in action. Miyasato believes we need to be forward-thinking.

And he believes his prior experience on the assembly will give him a leg up when it comes time to make those decisions. Other than incumbent Steven Eisenbeisz, Miyasato is the only candidate to have spent time at the highest level of municipal government.

Miyasato also values diversity — but he’s not referring to himself.

“I tried recruiting women candidates for the assembly when I was on the assembly. I feel that it’s important that we have equal representation at all levels of government.”

The last woman to serve on the Sitka assembly was former mayor Mim McConnell, who passed the gavel to Matt Hunter a year ago.

Miyasato says the time away from the assembly has been good, but he hopes voters send him back. He has no plans to double-up again, with seats on the Tribal Council and on the assembly. “This time around,” he says, “my sole focus is going to be on city government.”