150 years in the making, Kiks.ádi gather to commemorate loss of land 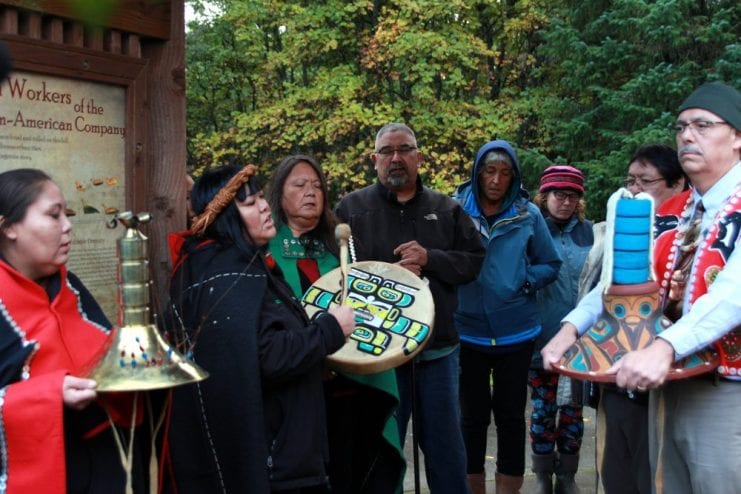 Several members of the Kiks.ádi, Sik’nax.ádi, and more gather at the base of Castle Hill on Sunday (10-15-17). Alaska Day is widely celebrated in Sitka as the site of the historic 1867 transfer of the Alaskan Territory. The 150th anniversary is a somer occasion for many in the Alaska Native community. (Emily Kwong/KCAW photo)

October 18th is Alaska Day. This year, Sitka is pulling out all the stops to commemorate the 150th Anniversary of the transfer of Alaska from Russia to the United States. Nevertheless, the holiday remains a somber occasion for many in the Alaska Native community. Some tribal citizens have begun to look for ways to acknowledge those feelings in a formal way. Sunday evening (10-15-17), a small ceremony took place at the base of Sitka’s Castle Hill to mark the day the Tlingit people lost their land.

This Alaska Day, reenactors will don period gowns and military uniform to watch as the Russian flag is lowered and the American flag is raised atop the historic Castle Hill.

This is a recording of the annual reenactment of the transfer ceremony, which typically draws a big crowd after the downtown parade and pie sale. But a history this complex has many sides.

The land upon upon which Castle Hill sits was originally occupied by the Kiks.ádi, a clan of the Tlingit people, and lost to violent clashes with Russian soldiers during the Battle of 1804. In 1808, the area was renamed Ново-Архангельск (New Archangel) and established as the capital of Russian America. This weekend, some of their descendants gathered there to voice the feelings of loss and trauma that Alaska Day brings.

Dionne Brady-Howard is a teacher at Mt. Edgecumbe High School.

“October 18th, 1867 marks the day that we lost our land. And we’re gathering here today where we were allowed to be on that day in 1867, which was not up there,” Brady-Howard said.

“Not up there” meaning up the stone steps to the grassy lawn of Castle Hill, which is why Brady-Howard stands among the trees at the bottom.

Alongside her is her mother Louise Brady, a culture bearer who has worked extensively in tribal health and law. Brady spoke of how the land was once called Noow Tlein (“New Fort”) and occupied by three Kiks.ádi, clan houses. “We’ve been in this area for 10,000 years,” Brady said, “and it’s been 150 years since it’s been known as Castle Hill.”

Brady-Howard carries a drum. “This song tells our history with the Russians a well,” Brady-Howard said, before leading the group in a traditional song of sorrowing called “Soox̱saan.” It tells the story of a woman who lost her child when the canoe he was sleeping in drifted away and had no uncles to comfort her. They died in battle. 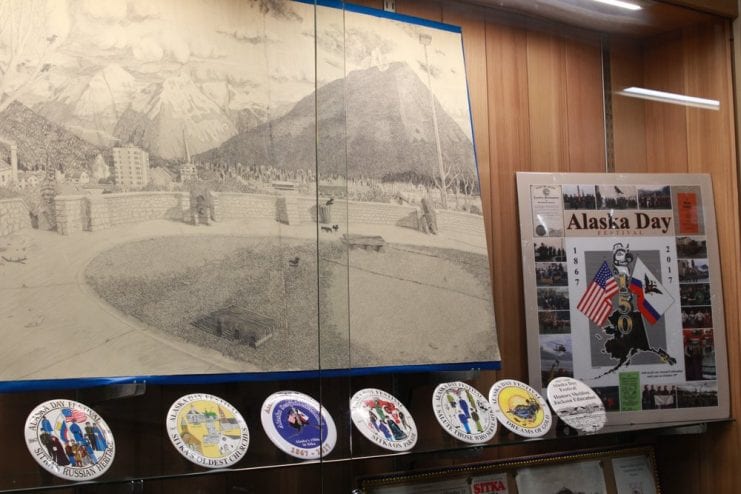 The transfer ceremony has been reenacted in Sitka since the 1940s on the same ground where it took place, Castle Hill. The site is now a state park. Alaska Day festivities are coordinated through months of careful planning by a local committee. They issue a commemorative button every year. (Emily Kwong/KCAW photo)

“I kind of felt like, okay…it’s been 150 years. This should be fine,” Brady-Howard said to KCAW and the Sitka Sentinel afterwards. ‘Then, towards the end of our sorrowing song, it was tough. The effects of it still being with us causes it to weigh really heavily on my heart because I see so many of our people still suffering,” 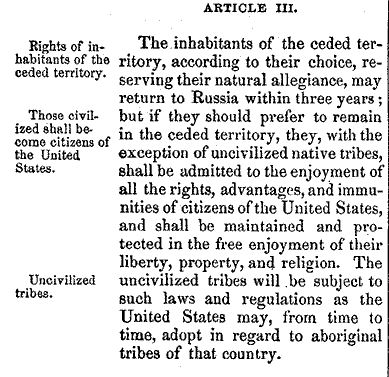 Article III from the Treaty of Cession, ratified by the United States, May 28, 1867.

Brady-Howard is talking not only about a loss of land, but of the cultural and political disenfranchisement that contact would bring. The Treaty of Cession offered American citizenship to all inhabitants of the territory with “the exception of uncivilized native tribes.” As a teacher, she sees daily impacts of that history in her students.

“I asked one class of mine the other day how many of them spoke Yup’ik fluently. There were three. And when I was a student at Mt. Edgecumbe, just 27 years ago, it would have been the reverse. And that’s the amount of degradation we’ve seen in the presence of our native language in one generation,” Brady-Howard said.

Brady-Howard is surrounded by a dozen others, some in regalia carrying sacred objects. One is a brass hat given by Alexander Baranof, the leader of the Russian American Company, to the Kiks.ádi as a peace offering. 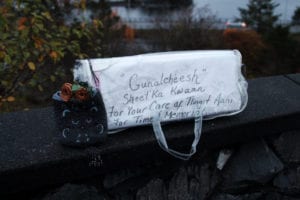 The Transfer Ceremony has never included the formal presence of Tlingit people. Last year, a woman came to Castle Hill with a sign thanking her ancestors and a member of the Alaska Day Committee told her it was disruptive.

Zlata Lund wants this year’s ceremony to be different. “We know our history. We have mixed feelings. But we want the future to be better — inclusive for all. This year is the special year,” Lund said.

Backstage at Sunday night’s Alaska Day variety show, Lund a sparkling red headdress called a kokoshnik and is about to perform on the guitar. The director of the Russian American Colony Singers first watched the transfer ceremony in 2014. She flew down from Anchorage again for this year’s commemoration and suggested that Brady-Howard and the Kiks.ádi join the transfer ceremony this year. The local Alaska Day Committee have also reached out to tribal citizens to participate, but nothing official has been confirmed.

As someone who studies Russian history, Lund is sympathetic to the idea that this day isn’t celebratory for everyone. “Russian people who lived in Sitka and who considered it their home, they also didn’t know what was happening exactly. Some of them were crying. So, it was a deal. It was a treaty. But we are living today, together. So we should change that historical moment,” Lund said. 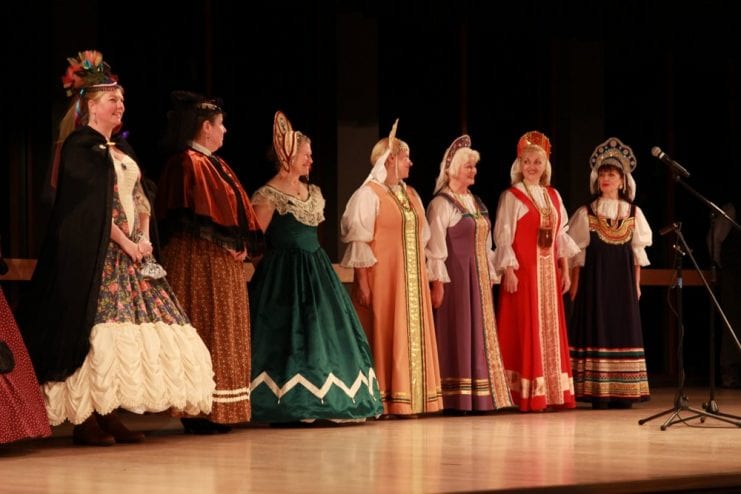 If the transfer was an opening sentence for an American Alaska, one of dispossession and exclusion, Lund thinks modern people have a chance to write the next chapter.

Meanwhile, as the transfer ceremony on Castle Hill nears, Brady-Howard is torn about whether to attend at all. “I hate to say it. It’s three days aways and I still don’t know and so…(sigh) and I’ve asked my Mom. She’s also very active with our clan and she didn’t know either.”

Brady-Howard pulls her robe more tightly around her shoulders. We’re taking shelter from the rain.

“I’m that Alaska history teacher who lives and works in Sitka and still has never been to a transfer ceremony on principle. I’m not sure this is the year,” she said.

The lead-up to Alaska Day has been a long, intricate drum roll for Sitka, which hosted a clan conference, a sesquicentennial speaker series, and countless art exhibitions and shows. But when the American flag is raised 150 to the day and the guns fire, Sitkans will have to decide for themselves how they feel and what it all means.