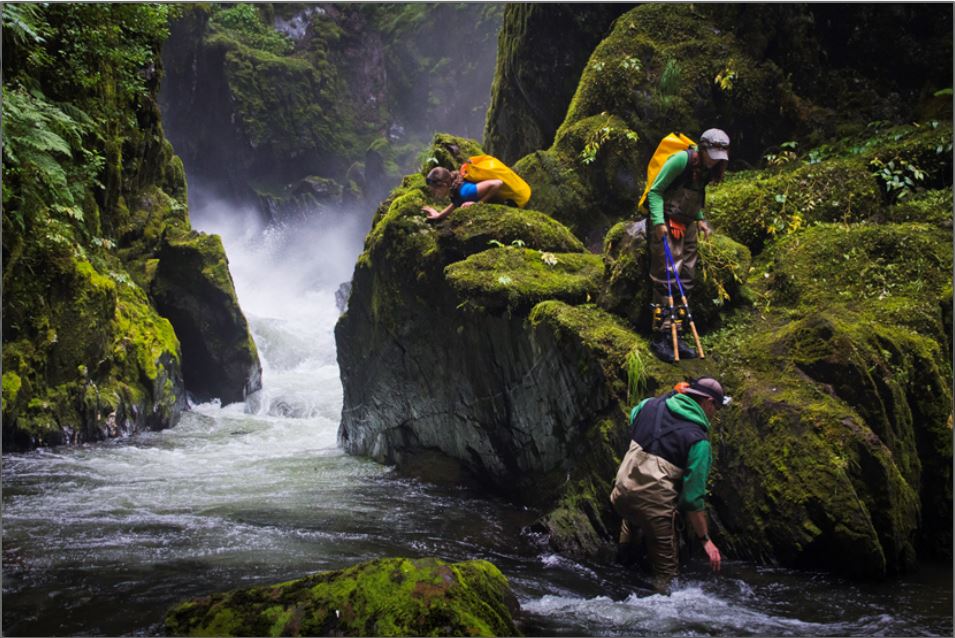 In a season that saw the first ever closure of all king salmon fishing in Southeast Alaska, scientists and fisheries managers are looking for answers: What helps Alaska’s wild salmon stocks? And what hurts them?

For the last six years, the State of Alaska, hatcheries, and processors have funded research to determine if Alaska’s own enhancement programs are harmful to wild populations.

In Part 1 of a 2-part series, KCAW’s Stephanie Fischer looks at the role of so-called “hatchery strays” in wild salmon reproduction.

(Note: Reporter Stephanie Fischer is a senior at Stanford University. She is the 2017 science journalism intern at the Sitka Sound Science Center.)

I’m standing on the shore of the Indian River, and I’m surrounded by thousands of pink and chum salmon ready to spawn. From here, you can’t tell where these fish came from. Some of these fish come from the wild, and some from hatchery programs in Southeast Alaska. It is no secret that a small percentage of salmon stray from their home streams it’s a part of their natural strategy for survival. But if too many strays from neighboring hatcheries end up here, both wild and hatchery salmon compete for oxygen. Hypoxia is one potential problem. Another is crossbreeding.

“Theoretical genetics suggests there will be a deleterious effect from strays in the stream,” says Steve Reifenstuhl, the General Manager of one of Alaska’s largest hatchery programs, Northern Southeast Regional Aquaculture Association. “And there’s been lots of research done in the lower 48 that demonstrates this, but its not analogous to what happens in Alaska –so we felt we really needed to look at specifically Alaska’s program and Alaska’s salmon stocks, and that’s what we’re doing.” 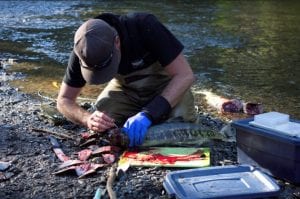 A research technician extracts an otolith — or earbone — from a spawned-out chum salmon. Otoliths indicate a salmon’s age and, in some cases, serve as a “tag” pointing to the fish’s hatchery of origin. (Chance Gray photo)

Hatchery operators and the State of Alaska created the Wild Hatchery Interaction Study in 2010. Run out of the Sitka Sound Science Center (which is providing logistical support on behalf of the Cordova-based Prince William Sound Science Center), it’s an eleven-year project focusing on pink and chum salmon. The study has three questions: What is the genetic makeup of pink and chum salmon? What is the stray rate of hatchery salmon? And what impact do hatchery stays have on wild salmon’s fitness, or ability to reproduce.

“We’re gonna hike the streams, we’re doing two streams, we’re gonna hike them everyday,” says Cory Dick, a member of the Juneau field crew. “Usually when they spawn they die, so we’ll find them on the banks and we’ll grab them, cut them open, and collect a DNA sample from their heart, so just a piece of heart tissue, and then we’ll collect two bones called the otoliths – which are basically their ear drums. And that will help determine where they are originally from, so, if it’s a wild salmon they won’t have any markings, and if it’s from a hatchery they will have some markings. And then, we’ll take a couple scale samples to determine how old they are.”

This data is then sent to a lab in Anchorage, where they can make a genetic database of the salmon they collect. With cutting edge genetic analyses, they are able to follow the lineages of the salmon, and determine if hatchery fish have an impact on the viability of wild stocks. 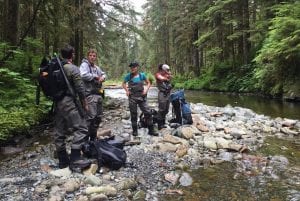 Technician Cory Dick describes the fieldwork in the study as “intense.” “It’s a little nerve-wracking thinking of the dangers, but, that’s what makes it exciting, right?” he says. Techs are armed with shotguns in the event area brown bears are feeling protective of their favorite fishing holes. (Chance Gray photo)

“I’m definitely really excited about the project,” says Dick. “I love being outside and Alaska is an awesome place — my first time up here and I already love it. I am a little nervous because it’s going to be very intense, every single day basically walking up miles and miles up and down streams over boulders and swift water. So it’s a little nerve-wracking thinking of the dangers, but, that’s what makes it exciting, right?”

Technicians like Dick have been collecting samples from thousands of salmon over the last 6 years. The final results of the project will not be completed until 2024, but Steve Reifenstuhl has a hunch on what genetic effect hatchery salmon have on wild stocks.

“I believe salmon, like humans, are very plastic –- very resilient,” he says. “And so I think what we’re going to find is no ill effect. And I’d say the purists believe that there is going to be an effect, and that’s kind of what it all boils down to.”

Sam Rabung, the Aquaculture Section Chief at the Department of Fish and Game, believes that Alaska’s strict policies themselves also are very plastic — preventing many risks.

Salmon are big business in Alaska, and so are hatcheries. Whatever the outcome of this Wild Hatchery Interaction Study, the economic stakes are huge.

In Part 2 of this 2-part series Fischer examines the economic stakes behind Alaska’s hatchery-enhanced salmon fisheries.