Scaling back hatchery salmon could mean huge losses for fleet 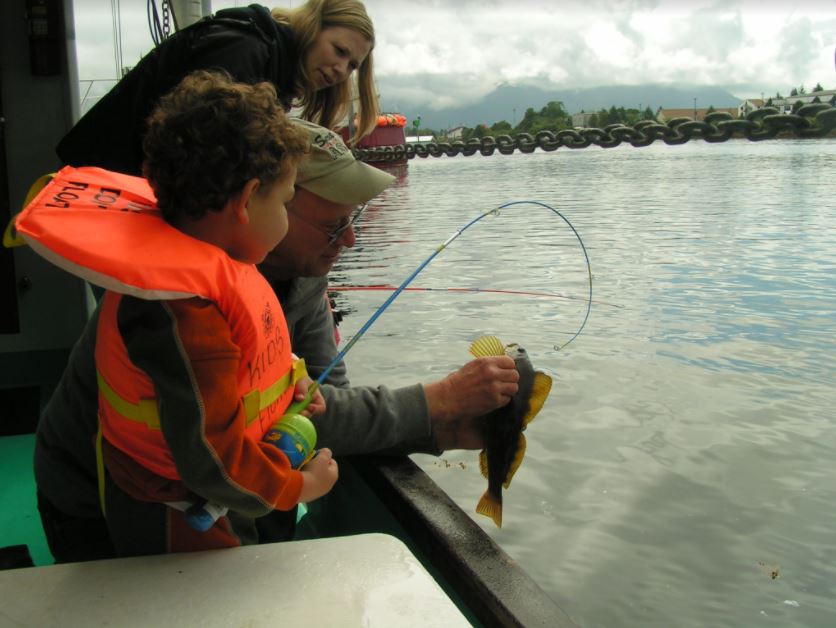 Salmon troller Jim Moore wants his grandchildren to have the same opportunities to make a living as he has — for 47 years. He’s discouraged that trollers had limited opportunities to target hatchery-produced chinook in 2017. “Fish that we paid for,” he says, referring to the 3-percent enhancement tax. (Photo provided)

Salmon hatcheries play a huge role in Alaska’s fishing industry. But what effect are all those hatchery salmon having on Alaska’s wild stocks, which are even more valuable?

In Part 1 of this 2-part series, KCAW’s Stephanie Fischer looked at the Wild Hatchery Interaction Study, an 11-year project researching the genetic consequences of hatchery salmon straying into wild streams and cross-breeding with wild stocks. In this story, Fischer examines the economic consequences on the industry, should Alaska ever have to scale back its hatchery programs.

(Note: Reporter Stephanie Fischer is a senior at Stanford University. She is the 2017 science journalism intern at the Sitka Sound Science Center.)

On the docks in Sitka’s Crescent Harbor…

Sitka’s Crescent Harbor is a forest of trolling poles. As salmon fishing winds down for the summer, commercial fishermen are either gearing up for other fisheries, or settling down for the fall. But all of them are glad of one thing: a strong run of hatchery-produced chum.

“In the old days, you know, I used to fish on them for as little as 15 to 18 cents a pound,” says James Moore. “Now, it’s nearly a dollar a pound for chum. And the relative difference, price difference, between that and a coho is, you know, basically one to one this year I think.”

James Moore has been a salmon troller for 47 years. Hatchery-produced chum, after several years of weak returns, rebounded this year. But for chinook, or king salmon, it was a disastrous year. The state closed spring trolling for chinook, held a four-day opening in mid-summer, and then closed down king fishing entirely — even sport fishing. The closure was tough for fishermen like Moore, who pay a 3-percent “Enhancement Tax” on their catch to fund the state’s private nonprofit hatcheries.

“There’s opportunity provided for the troll fleet to catch the enhanced chinook, primarily that we paid for — we produced — ourselves. If we weren’t allowed to fish any king salmon during this period of time, we couldn’t benefit from the hatcheries at all.”

For Moore, the results of the Wild Hatchery Interaction Study may have a big impact on his livelihood. He wants unbiased, quality science to be conducted so proper decisions can be made from the results.

So do state fishery managers.

“When we met in 2010, we talked about who was going to guide this work,” says Ron Josephson, the now-retired Program Chief for the Hatchery Permitting Section of the Alaska Department of Fish and Game. “So, the hatchery operators wanted some other scientists who weren’t vested in the success in the program; they just wanted to see good science done. And the processors, they wanted it clear that they wanted to be a silent partner. They wanted to provide funding, but they didn’t want to perceive that they were making decisions about how this research was done.”

The State of Alaska, hatcheries, processors, and of course the fishermen all have a stake in the outcome of the Wild Hatchery Interaction Study. And, Josephson says, the stakes are high.

“Could we change the stocks? Probably not,” Josephson says. “Could we decrease the hatchery program production? Yes, of course that could be done, but would people stomach the immediate losses in income? You know, the fishermen want the best for the long term health of the resource, so I think they would make tough decisions if they had to be made.”

Valued at $187 million in Alaska in 2016, hatchery-produced salmon are an economic driver for the state. Scaling back production would not be an easy decision. The stakeholders realized this when they initiated the study. 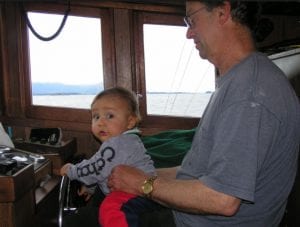 Troller Jim Moore breaks in a new deckhand aboard the Aljac. “Having an opportunity to shape the lives of my grandchildren,” says Moore, “it’s just a tremendous privilege.” (Photo provided)

“Commercial fishing is not just a job, it’s not even a career…it’s more of a lifestyle –it’s almost a religion! (laughter) For lack of a better word,” says Sam Rabung, the Aquaculture Section Chief at the Alaska Department of Fish and Game. “If hatchery produced fish are having an effect on the natural production we need to know that.” “And we’re operating under the assumption that right now it’s not having an effect because of our safeguards that we put into place and, you know, it looks like it’s working. But, maybe they’re not working as well as we thought they were, and maybe we can improve some practices. So, it’s all about harvestable fish, and sustainability in a nutshell. We’re doing this for our grandchildren.”

Grandchildren, who James Moore is currently teaching how to be deck hands.

“Many years we fished as a family on the boat. Raised the kids on the boat. I’m now training my grandkids as crew, and you know, having that opportunity to shape those young lives. It’s just a tremendous privilege.”

The results of the Wild Hatchery Interaction Study will be published in 2024.