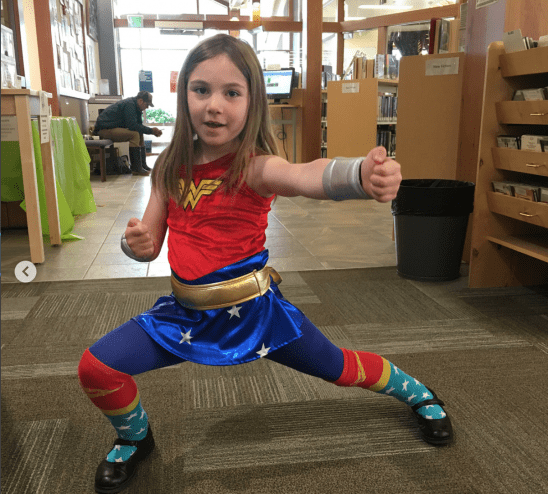 Eir Christianson wore her Wonder Woman costume to an all-woman screening of the live action film in Sitka in July. The costume is the top search for Halloween this year. (Emily Kwong/KCAW photo)

As Halloween approaches, the costume scramble is underway. One of the most popular is for a character that first appeared on the public’s radar in All Star Comics #8 in October 1941 and made a comeback with a blockbuster film this summer. Wonder Woman is now the top Google search for Halloween costumes this year. 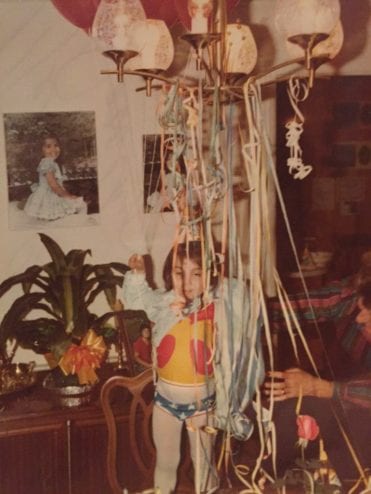 Jessica Christianson was only three-years-old when she discovered Wonder Woman, the Lynda Carter version. She doesn’t remember much about the 1970s TV show, just this image of a woman spinning through a flash of light and emerging a superhero.

“Usually the rest of the day, I would run around my apartment wearing my Wonder Woman beach towel, which was the mainstay of my Wonder Woman costume,” Christianson said. “I would make cuffs out of toilet paper towel rolls  or cut up paper towel rolls for her arm bands. Then I’d find a shoelace or a yarn bit or a piece of rope.” With this make-shift, golden lasso, she’d wrangle stuffed animals.

When I spoke with Christianson back in July, a live action feature film of Wonder Woman directed by Patty Jenkins was in theaters. It was the highest grossing film at U.S. Box Offices this summer and she’d brought an adult-sized Wonder Woman beach towel with her to the screening. 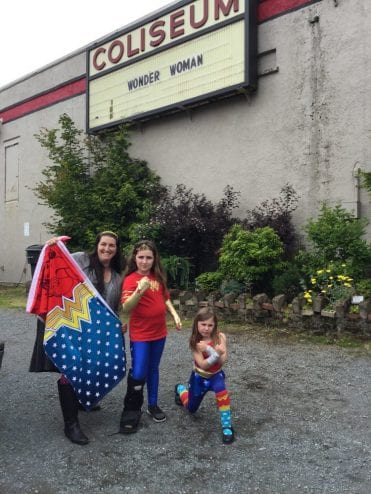 Jessica, Rita, and Eir Christianson at an all-female screening of Wonder Woman in July at the Sitka Coliseum Theater. (Emily Kwong/KCAW photo)

Along for the ride are her daughters Rita and Eir, who are also dressed for the part. Eir’s costume was a hand-me-down, with some Southeast flair.  “She’s got her blue rope from a boat line. That’s her lasso of truth that we’re bringing in today,” Christianson said of her daughter’s costume. “And she’s got a favorite pair of socks that she’s wearing. It’s still that imaginative play core. That’s what’s important.”

Christianson is a teacher at Baranof Elementary School. She adds that seeing more female heroes take the screen – like Rey in the 2015 film Star Wars: The Force Awakens –  is having a trickle down effect in what kids pretend to be in the classroom.

“Whereas I’ve always – in my twelve years of [teaching] first grade – seen Batman and Darth Vader represented when they play imagination, the rise of Rey and Padma and Star Wars and Wonder Woman [puts female characters] right there in the thick of it.”