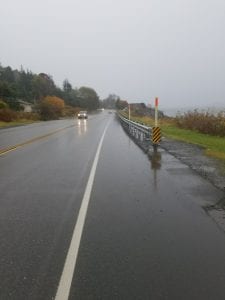 Sunday afternoon’s accident occurred in the 2400 block of Halibut Point Road, as both bicyclist and driver were heading inbound. (Photo courtesy of Detective Mitch Meens, SPD)

A car accidentally collided with a bicyclist in the 2400-block of Halibut Point Road on Sunday.

The accident occurred around 2:47 p.m. Sunday afternoon (10-29-17), when Sitka Police received several 9-1-1 calls. SPD and EMS responded. Detective Mitch Meens assisted the bicyclist, who was lying on the ground.

“Something happened and she pulled out. The vehicle ended up striking the rear end of the bicycle,” he said.

Meens noted the bicyclist was without a helmet and is currently being treated for a head injury. He hoped she was in “good health and good spirits,” reminding Sitkans to practice bike safety.

“In the case of something tragic happens, that helmet could potentially save your life and I want to stress that to people in the community as much as possible, he said.”

As this is an active investigation, Meens did not disclose the name of the bicyclist nor the driver.