Sarah and Eric Jordan take to the Sitka Seawalk as part of the “Park Prescriptions” program — an organized walking activity that contributed to Sitka’s winning a bronze-level renewal. Walk Friendly Communities was particularly impressed with “the consistently high walking mode share and (low) pedestrian crash rate, the level of planning effort and community support for Sitka’s trail system, slow speed limits through downtown and in school zones, paired with pedestrian countdown signals at Sitka’s two main intersections, and the variety and frequency of walking programs.” (Charles Bingham photo)

Sitka has been recognized — for the second time — as a bronze-level “Walk Friendly Community.” It’s the only city in Alaska to win the designation.

The Pedestrian and Bicycle Information Center in Chapel Hill North Carolina created the program, and Sitka has been on board almost since the beginning, thanks in large part to the efforts of one dedicated pedestrian. 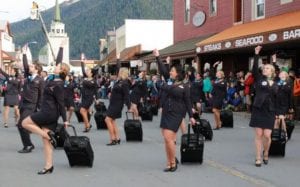 On Sitka’s sidewalks during the Alaska Day Festival.

The renewal notice from the Walk Friendly Community Program came in on October 18 — Alaska Day — when Sitkans were commemorating the 150th anniversary of the day Alaska joined the US.

On this day, more than ever, it’s apparent how easy it is to get around town. From the national park battlefield to the ANB Founders’ Hall, it’s a modern city built on a Russian colonial capital, which itself was built on an ancient Tlingit settlement.

After filling out a 40-page application with 105 questions about traffic, zoning policy, schools, sidewalks, and other amenities, Sitkan Charles Bingham convinced the Pedestrian and Bicycle Information Center of what most everyone here already realizes: The town was designed by human feet.

Here’s Bingham explaining how he did it. 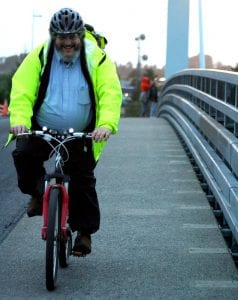 When he’s not walking, Charles Bingham is riding a bike. “I haven’t owned a car in 10 years,” he says. Bingham did the “legwork” in applying for both Sitka’s Walk Friendly and Bicycle Friendly designations (David Nevins photo)

In 2012 at the Sitka Health Summit we said, Let’s get that designation as well. So in 2013 we submitted an application and we became the first bronze-level or higher community in Alaska to receive a designation. And this is basically a renewal of that application. Typically they give you five years. We reapplied after four, hoping to move up to silver, but they decided to keep us at bronze. They’d like to see more evaluation like pedestrian counts, a complete streets policy in town that would make sure there are better sidewalks, to make it easier for walkers to get around. But with our limited resources you do what you can, and we’re still the only community at the bronze level or higher. And we’re also the only community with both the Walk Friendly and Bicycle Friendly Communities.

Sitka’s bronze level walk-friendly designation will be up for renewal in 2022. Bingham hopes that improvements to Sawmill Creek Road, between the roundabout and Jeff Davis St., will kick Sitka up to Silver. Juneau, by the way, has an honorable mention.