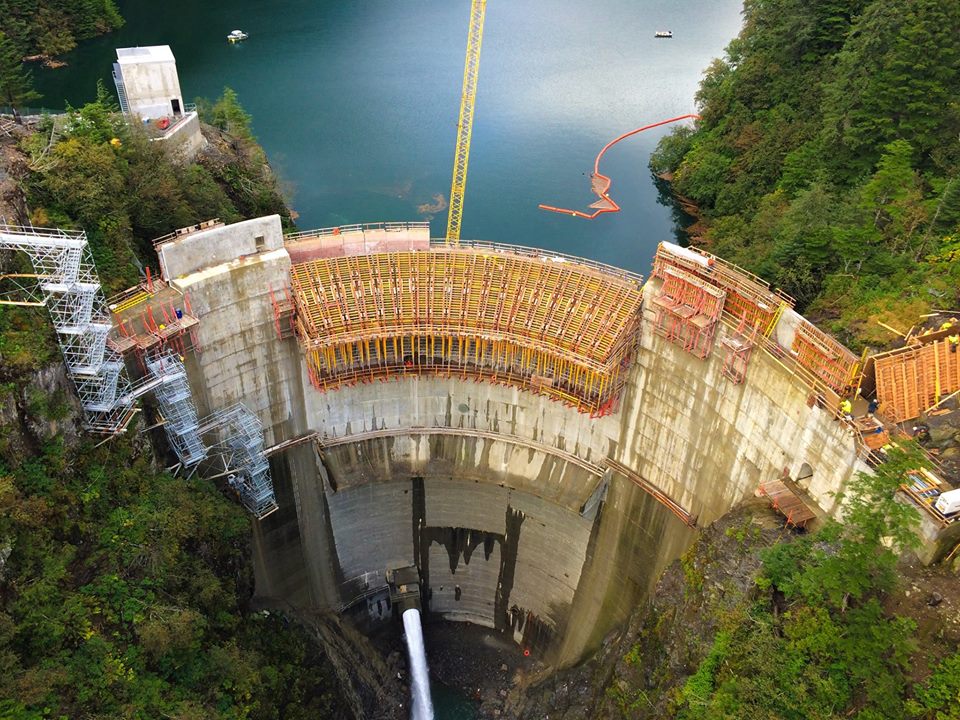 The Blue Lake dam under construction in September, 2014. Half of all electric bills in Sitka now pay down the debt to build it. On the upside: Sitka has 40-percent excess capacity, and can afford to attract major industry. (Blue Lake Expansion photo/Desiree Brandis)

The Sitka Assembly has agreed to take a harder look at a proposed ordinance that would allow the Electric Department to offer discounted rates for new, large customers.

The assembly favored the idea of creating incentives to spur industrial growth, but hoped the plan could be structured to favor small business development as well.

Like many communities in Alaska, Sitka produces and pays for all its own power. But about half of the expense is debt on the Blue Lake hydroelectric expansion, which was finished a couple of years ago.

Department director Bryan Bertacchi put his case before the assembly.

“So the real answer to reduced rates for everybody in the community — I mean everybody: residential, small commercial, large commercial — is new load. We really need to find new load for everybody in town, and we’ve been working really hard on that in the last two years since I’ve been here.”

Although Sitka has been experiencing load growth over the past year, Bertacchi would like to jump start it by creating incentives for a major customer — like the Coast Guard, which is looking for homeports for a pair of new, fast-response cutters. For him, the numbers are straightforward.

And the top 16 customer accounts pay in excess of $125,000 a year, which is where Bertacchi would like to set the bar for negotiating a discount with a potential new customer — or new load: If it’s worth at least $125,000 a year, he’d like to make a deal.

Assembly member Richard Wein balked at the idea. He wanted more structure — and some accountability — written into the ordinance. He said he would vote no on first reading.

“What it’s kind of lacking is a business plan and details. The current ordinance is just too vague — at least for me — as presented.”

Bob Potrzuski, on the other hand, thought the ordinance was business friendly. He noted that any deal negotiated under the ordinance would have a three year sunset.

Steven Eisenbeisz, who owns a downtown retail store, wondered if it could be even business-friendlier.

“I think if you’re burning $125,000 in power a year you have quite a significant amount of capital already raised, and/or you are part of a bigger corporation that can afford that. I think it’s the smaller commercial guys who literally have their life savings — their last $50,000 invested in their business — that really need the help here. I would rather see multiple small businesses start in Sitka than one large WalMart-type corporation.”

Bertacchi said it might be possible to lower the threshold to customers who used $75,000 a year, but there was logic behind the original threshold: Customers at the $125,000 level could expect to save around a quarter-million dollars over the three-year term of the discount, which could go directly into wages and other investment.

Member Aaron Bean suggested amending the ordinance to strike the word “large” whenever it preceded the word customer. But Mayor Matt Hunter co-sponsored the ordinance, and he wanted to continue thinking big.

“The more leeway we give, the more useful these ordinances actually are to negotiate and bring businesses to town. I don’t know if you guys have been following Amazon’s search for a second headquarters. There are cities like Detroit or Chicago — I forget which of those two — was offering $5 billion in incentives to come, because it brings thousands of jobs and will pay dividends for decades to come. This is one of the few things we can do to attract new business. Maybe nothing comes, but if we have this out there someone might say, Oh look! We can get a better rate. If we can get them down to this number, then we can go to Sitka and make a go of it! That’s all I want.”

Mayor Hunter’s co-sponsor, Kevin Knox agreed — but both were willing to bend to keep the ordinance alive. On Bob Potrzuski’s motion, the assembly agreed to send the ordinance to committee to give it the structure sought by Wein, and an opportunity for small businesses sought by Bean and Eisenbeisz.

A committee reading is common in state and national government, but it’s a brand new parliamentary practice for the assembly. Mayor Hunter asked for volunteers and appointed Aaron Bean, Richard Wein, and Kevin Knox to serve on the committee, and bring the revised ordinance forward again in the future.