Indigenous voices call for a new kind of Alaska Day 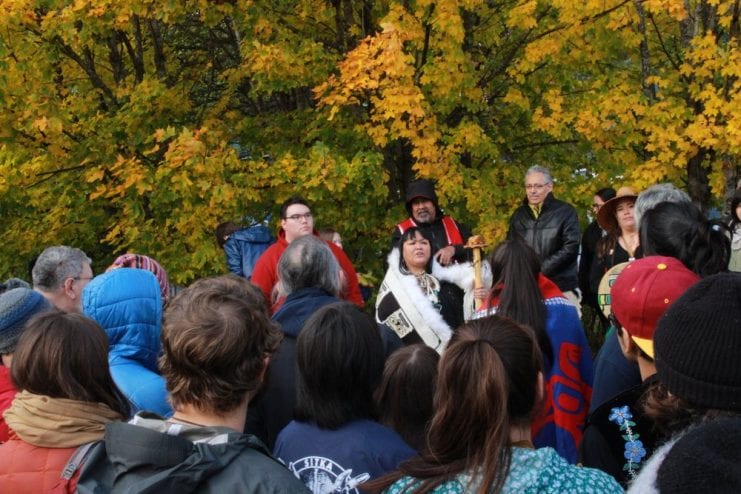 Teacher Dionne Brady-Howard, who organized the sorrowing ceremony to coincide with Alaska Day, said the day’s events showed her that non-native people were willing to talk about the racial aspects of Alaska Day. “I was excited to see so many allies with us. It might not change the world to have those dialogues in Sitka, but it can change Sitka. And that’s a start. (Emily Kwong/KCAW photo)

The holidays are a time of tradition, but also reflection for why we celebrate the way we do. And in Sitka, no holiday is as much of a lightning rod for cultural debate as Alaska Day. Historically, October 18th marks the day Russia transferred Alaska to the United States. But in the Alaskan Native community, many regard it as the day their land was lost — bought and sold by foreign powers.

In part one of a two-part series on “Navigating Sitka’s Colonial History,” KCAW’s Emily Kwong reports on how differing perspectives surrounding Alaska Day collided on the very same hill.

For Native American Heritage Month, a talk on Tlingit people and culture will take place on Sunday, November 26th at 2 p.m. at Sheet’ka Kwaan Naa Kahidi. In part two of this series Monday (11-27-17), KCAW’s Katherine Rose examines how controversy around Civil War monuments in the Lower 48 has energized a local conversation about a Russian statue in downtown Sitka.

“The time is October 18th,” announced narrator Harvey Brandt to a crowd of civilians.

The year is 2017, but you wouldn’t know it at first glance. There’s beards and bonnets and soldiers lining the rim of Castle Hill with guns pointing to the sky. This year’s Alaska Day was the big one for Sitka – the 150th – and even the gun salute would be historically accurate: 42 cannon shots echoing off the mountains.

“It was an unusually fine day, like this,” Brandt continued, looking at the clear skies. “Maybe not quite as nice as this.” 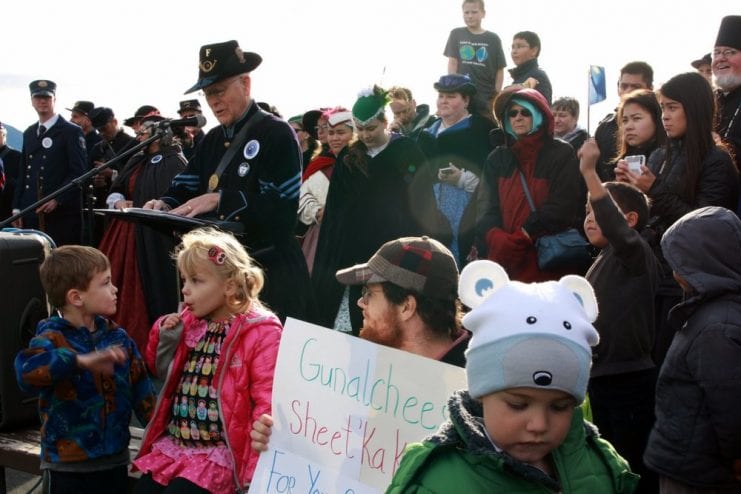 Sitka commemorated the 150th anniversary of the transfer of Alaska with great fanfare. But the ceremony also became a staging ground for protest around the holiday’s colonial legacy. One attendee carried a sign thanking the Tlingit people for stewardship of the land. (Emily Kwong/KCAW photo)

Head bent over a script, Brandt then narrated the historical moment when the Russian flag is lowered and the American flag is raised. Quoting a New York Times article, he reads, “By 3:30, a large concourse of people had assembled, comprising Americans, Russians of all classes, Creoles, and Indians all eager witnesses of the ceremonies.”

The script this year is rich with primary source material, folded in by Steve Dahlquist and other members of Alaska Day Committee to make this year’s reenactment as accurate and inclusive as possible. But a few paces to the bottom of Castle Hill, a group of people gathered to express the deep pain this moment brings. 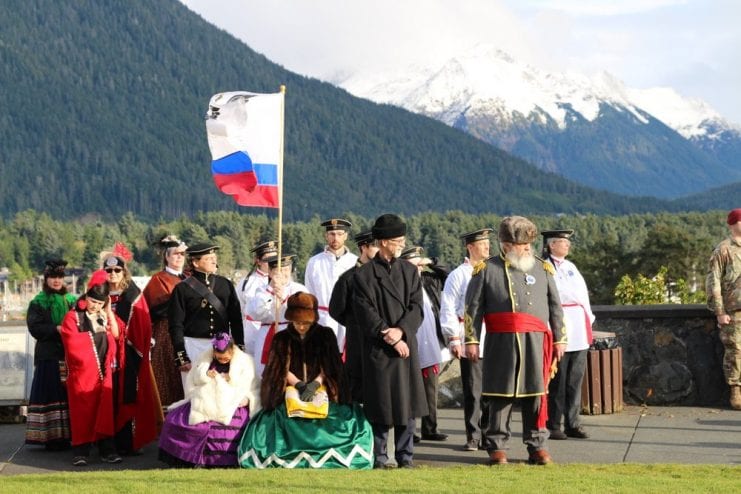 Dionne Brady-Howard is a member of the Kiks.ádi clan, original occupants of the land. She and others were invited to participate in the Transfer Ceremony, but turned it down. Instead, through social media and word of mouth, she instead organized a counter ceremony this Alaska Day to drum and sing sorrowing songs.

“There’s never really been a time of healing…whether we’re talking about the cultural genocide, the taking of our languages across the state, and all of the trauma that came from being told who we were wasn’t good enough and who we were wasn’t who we should be,” Brady-Howard said.

The crowd is much smaller than the one atop Castle Hill, but listening intently. Some are Native, some are non-Native. A few are crying, as gunshots ring out overhead.

“Anytime race relations are brought up, too often people of color are told how we shouldn’t feel,” Brady Howard said. A social studies teacher at Mt. Edgecumbe High School, she adds, “It’s like our African American brothers and sisters who are told to just get over slavery.” She then calls for the group to sing an Eagle sorrowing song from the Kaagwaantaan clan, called gooch gaas. 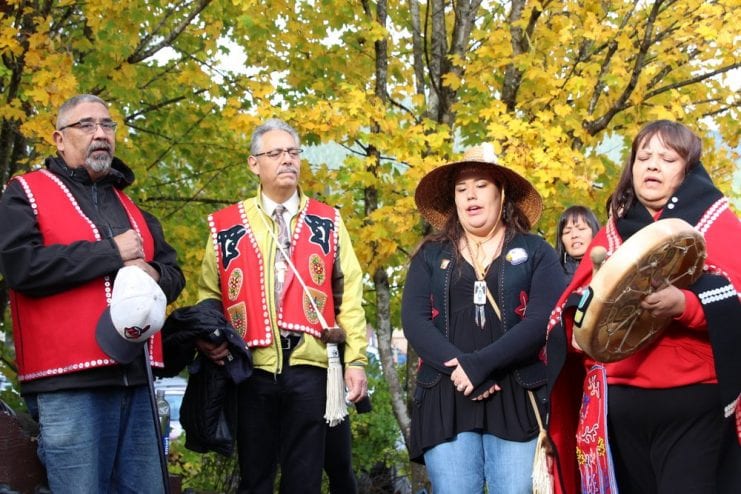 The land upon upon which Castle Hill sits was originally occupied by the Kiks.ádi, a clan of the Tlingit people. For the first time in 150 years, members of the Kiks.ádi organized a sorrowing ceremony — gathering at the bottom of the hill while the formal ceremony took place at the top of the hill. (Emily Kwong/KCAW photo)

Jennifer Carter is a history-buff of Russian descent. She always attended the Alaska Day reenactment in the past, but decided not to this year. “I couldn’t walk up the steps to the hill. I’m glad I didn’t have to. I’m glad I could be right here,” Carter said. She remained shaken by a confrontation she witnessed last year, when Paulette Moreno brought a sign to Castle Hill thanking her Tlingit ancestors and was told by one of the organizers it was disruptive.

“[Paulette] was treated very rudely. I just vowed that I couldn’t be a part of that anymore,” Carter explained. “I’m very grateful to have the chance to be here observing the other part of the story that isn’t vocalized.” She plans to attend the sorrowing ceremony if it happens again next year.

October 18th, 2017 was an unprecedented day in this respect: the historical reenactment of the transfer was split in two. Some were disappointed by that.

“It should all be together,” said AJ Bastian, gazing out over the water with her kids, “so that the children especially who were growing up together should see that we’re all making better choices now than in the past.”

Brandt has narrated the Transfer Ceremony many times before and plans to always participate. He added, “But I can see this ceremony evolving and changing, because of more awareness of people’s sensitivities and more inclusion of all kinds of people from this community,” he added.

Others, like Peter Bradley, protested the reenactment altogether. Weaving among the crowd, he passed out a resolution (AK Day Resolution) calling for the re-naming of Alaska Day to Reconciliation Day. “There’s a lot of people that are left out of Alaska Day right now: the original people of this land that cared for it for a long time,” Bradley said. 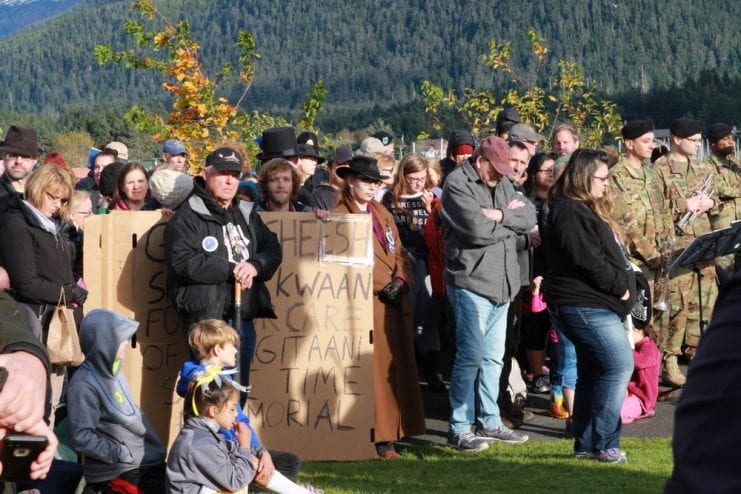 Peter Bradley brought a sign to the transfer ceremony to recognize Tlingit tribe indigenous to the land. A another individual blocked the sign in an act of protest. (Emily Kwong/KCAW photo)

Several participants, including Bradley, re-created Moreno’s sign on even larger pieces of posterboard, proclaiming, “Gunalchéesh Sheet’ka Kwaan for your care of Tlingit Aaní for time immemorial.” During the transfer ceremony, Bradley stood with his sign at the front of the crowd and a man blocked it with his body in counter-protest.

I saw that man at a cook-out later that evening When asked why he stood in front of the sign, he said, “It’s not a celebration of Tlingits. It’s a celebration between United States and Russia.” He did not give his name.

And Bradley’s response to that perspective? “He nailed it. ‘It’s a celebration of Russians and Americans.’ That’s the problem,” he countered.

Make no mistake: Alaska Day in Sitka is a visibly joyful one: parents off work, there’s a parade, and pie sale. But, as far as the Transfer ceremony is concerned, there’s never been a comfortable or concerted way for the Alaskan Native perspective to be included in a history that intimately affected them too. Luckily, as Brady-Howard sees it, there’s another 150 years ahead to try.

“It’s not necessarily about the Transfer ceremony itself. I think it’s going to continue to be a thing in Sitka. For me what it’s more about is an ability to see another person’s perspective and to have empathy and to automatically go to that defensive place that prevents progress,” Brady-Howard said.

History is dynamic and that is especially true in Sitka on a day as significant as October 18th. While Castle Hill may be set in stone, the traditions around Alaska Day and the people who participate in them are not. 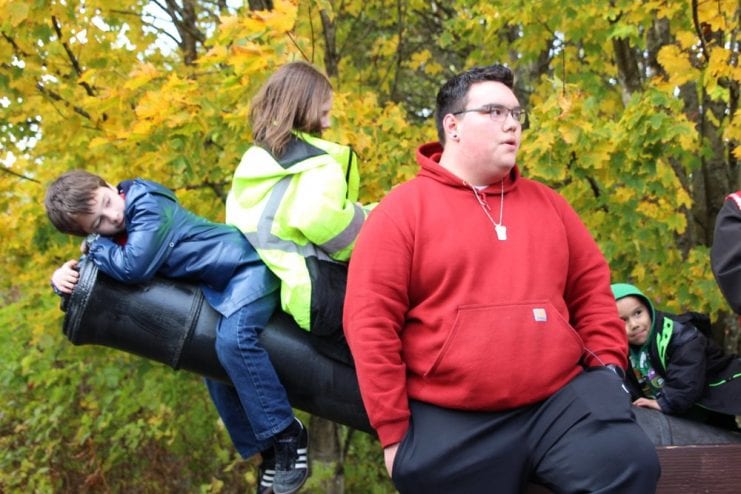 A young boy rests atop a canon at the bottom of Castle Hill. The group sang three songs of sorrowing. (Emily Kwong/KCAW photo)