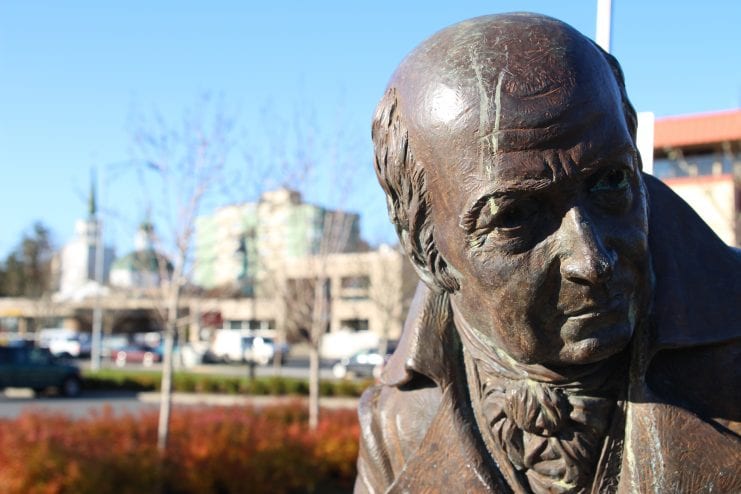 Alexander Baranov was the first general manager of the Russian-American Company, and the statue of him was erected to honor the role of commerce in Sitka’s past. KCAW Photo/Katherine Rose

Earlier this fall — right around the October Alaska Day Festival — a group of Sitkans renewed a conversation about a piece of bronze art in heart of downtown. Alexander Baranov was the first general manager of the Russian-American Company, and the statue of him was erected to honor the role of commerce in Sitka’s past. But for many, Baranov and the Russian-American Company are synonymous with colonization and the systematic oppression of Alaska Natives. In the second installment in our two-part series – Navigating Sitka’s Colonial History – KCAW’s Katherine Rose met with people on both sides of the issue and filed this report.

There’s a bronze statue in front of Harrigan Centennial Hall. It’s nearly to scale – a man sitting hunched over beneath flags flapping in the wind, looking pensively in the distance. The man is Alexander Baranov, manager of the Russian American Company in the early 1800s. On the plaque beneath him is a quote:

“That we may dwell in amity and peace forever in this region.”

But for Louise Brady, the statue doesn’t bring her peace.

“It is, to me  a symbol of epidemics, of assimilation, of bad policy, of destruction of a way of life,” says Brady.

Last summer, as momentum grew in the South to tear down Confederate monuments, some Sitkans started to wonder about their own legacies to the past. Larry Edwards wrote a letter to the editor of the Sitka Sentinel calling for the removal of the Baranov statue. Martina Kurzer, his wife, signed it.

“This thing about the Baranov Statue didn’t bother me at all in the beginning until I learned the finer fabric of Sitka,” says Kurzer. “And I started to understand simply how having the statue there rubs in the fact again and again that the people who have been here on this land for 10,000 years are not in charge of this land anymore.”

After the letter appeared in the paper, it was re-posted on the Facebook page “Sitka Chatters” and ignited a comment war. Some called for the statue’s removal. Others defending it. The post has since been taken down. Brady says there’s a reason some don’t understand her discomfort with the statue.

“I think it ties into privilege,” Brady says. “Being able to say ‘I love living here, this is a beautiful place.’ I can just be here without understanding that there’s people who’ve been here for 10,000 years who were just granted citizenship less than 100 years ago.”

“Now that we know so much more about trauma and what trauma does to a person on a health level, we can ask is it still timely to have the statue of the oppressor right there in front of the community center?” Kurzer asks.

The controversy swirling around the Baranov statue isn’t anything new. A gift to the city from Lloyd and Barbara Hames in 1989, the statue caused tension from the get-go. The night before the statue was dedicated, someone cut off its nose. That was after discovering that the head would be too hard to remove. The artist was able to repair it with putty for the ceremony the next day. It was defaced again in 2013, with cuts to its nose and forehead. 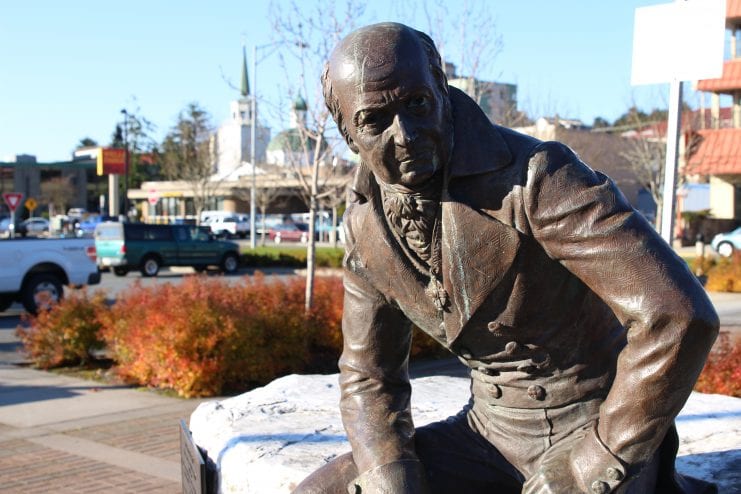 “Has the statue had controversy surrounding it? Yes. But maybe controversy is good. Because it leads to conversations,” says Hal Spackman of the Sitka Historical Society. Spackman says the statue tells the story  of the Russian settlement. He says it was built to honor Sitka’s merchant past. While that doesn’t reflect the feelings of all Sitkans on their history, he says the fact that it happened means it’s worth remembering.

“We need to value all perspectives,” says Spackman. “It doesn’t mean that we devalue any perspectives.  And I hope we all can use those conversations to not just celebrate history but discuss history in a way that’s productive and moves us forward as a society.”

But Brady thinks the perspective the statue represents is one that’s told too often.

“I think that’s the power of the narrative and who gets to create the meaning,” Brady says. “Sure he can stay there if we get to tell the whole story. Maybe we can have a Tlingit woman warrior there?”

Earlier this month, a group of people met at Sitka Public Library to discuss commissioning a statue of K‘alyáan, who led the Kiks.ádi in the battle of 1804. The plan is not necessarily meant as a response or a foil to the other statue, but it’s hard not to note the contrast.

Brady says putting up a new statue isn’t a solution. Conversations need to happen, and that’s harder than it sounds.

“It isn’t easy. I wish it was as easy as putting up, answering statue for statue,” says Brady. “But unless we have that dialogue- and I think one of the things the dialogue gets so inflammatory is because racism is such an emotionally charged word. It’s difficult to have that conversation without having a language.”

For now, the bronze Baranov still sits downtown. Tourists take pictures of this relatively small monument most unaware of the large conversation that surrounds him.