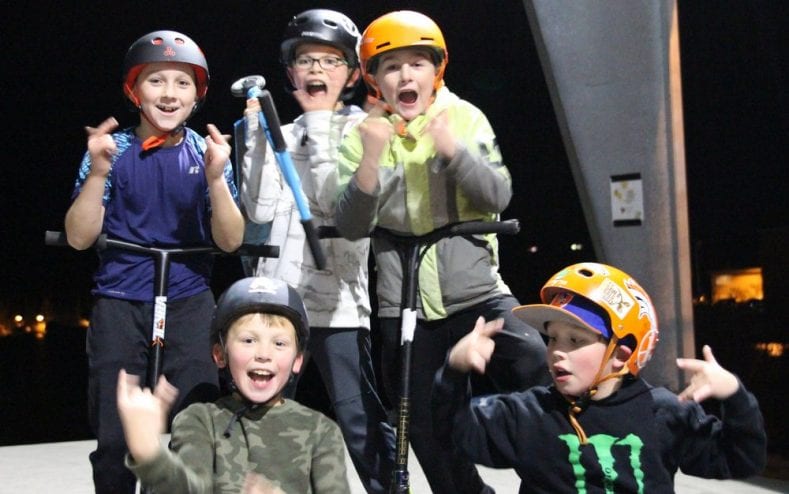 There’s a new light display in Sitka and no, we’re not talking about the kind that twinkle. The city recently installed overhead lights at the Turnaround Skate Park, a popular hang-out spot for skaters and scooter riders looking to catch some air.

Full disclosure: I missed the exact moment the city turned the lights on for the first time, but a group of elementary school boys was all too happy to re-create their reaction.

Chris Cropley, Joshua McGraw, Tyson Bartolaba, Dylan Sulser, and Leon Barclay joyfully screamed and tossed their scooters into the air. They quickly requested I snap pictures of their “tail whips,” a trick that involves jumping in the air as the scooter turns a full revolution before sticking the landing. 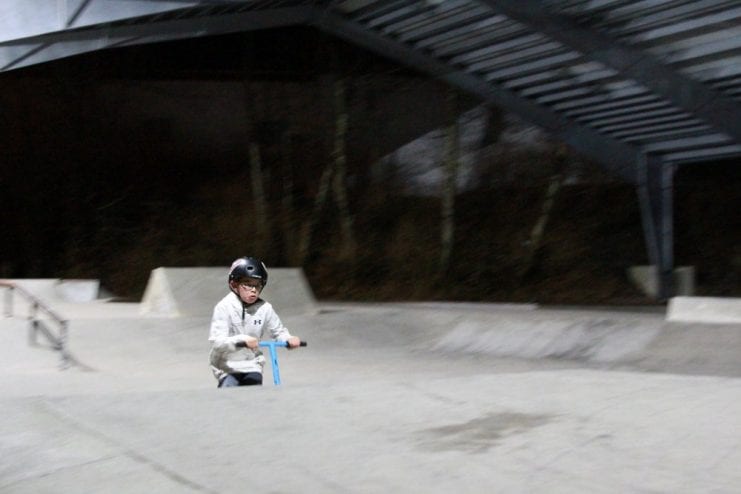 With these four LED lights, the Sitka Police Department hopes Turnaround Skate Park will not only be a brighter place, but a safer one too. SPD has received calls over the years about drunk and disorderly adults gathering at the skate park. (Emily Kwong/KCAW photo)

The sun set hours ago, but the four LED lights are bright enough to light the bowl, a concrete oasis for those on wheels. With the sun setting earlier these winter months, the addition of lights buys the skaters hours of time and parents some peace of mind. This is Jane Bradley.

Jane Bradley has two sons who like to skate at Turnaround. “The kids hate the winter because it gets dark out. We can’t go certain places, but this I am comfortable with. It’s well lit and we can see it even from the roadside,” she said.

The lights were installed by the city’s public works and electric departments, with multiple permits from the state Department of Conservation. That’s because the park was built near an old turnaround for amphibious planes. Built in 2007, skater Kevin David says that Turnaround Skate Park is the place where he pushes himself in positive ways.

David: This is where I learn new stuff and push out my boundaries and set a goal.

KCAW: Where would you be if the skate park wasn’t around?

David: Um, I don’t know, probably hanging out with some bad people if…like, the park wasn’t here. The park gets a bad rep, but it’s not a bad place.

David is talking about the fact that in recent years, non-skating adults have gathered at the park to drink or smoke. Their drunk and disorderly conduct unnerved skaters and parents, many of whom filed complaints with the Sitka Police Department.

Two years ago, Lieutenant Lance Ewers began pushing for the installation of video cameras, but is even more confident that finally installing lights will help prevent future crime.

“By putting the lights in, in combination with the cameras, we can give that skate park back to what it was originally designed to be – a safe place for children to hang out and have a good time in a nice, safe environment,” Ewers said.

Right now, the lights are illuminated 24-hours a day, though Ewers added they may run on a timer in the future.