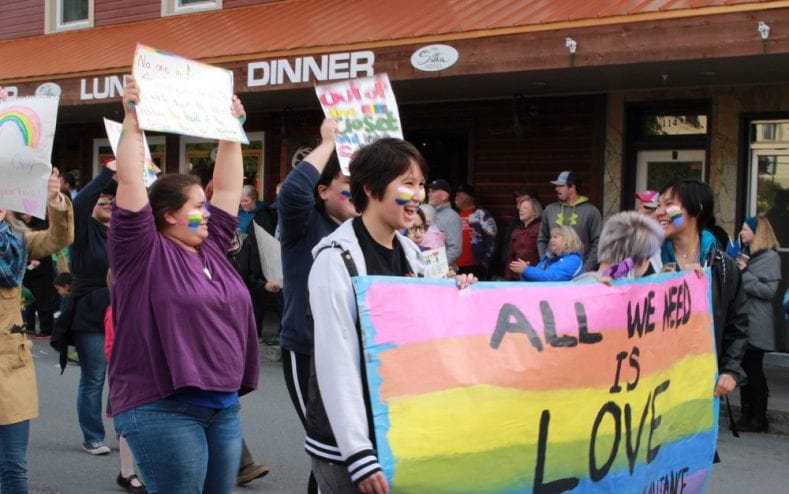 Mt. Edgecumbe students march for LGBTQ civil rights in the Alaska Day parade. The Sitka Assembly is in the process of passing laws to outlaw discrimination on the basis of race, color, religion, gender, sexual identity, and disability. (Karla James/KCAW photo)

The City of Sitka may soon have a non-discrimination law on the books. The new lines of Sitka General Code would define unlawful discrimination and create a process for citizens to file violations in court. While the Sitka Assembly unanimously approved the ordinance on first reading, the legal language didn’t sit well with everyone.

Assembly member Richard Wein is mulling over Sitka’s first attempt at an non-discrimination ordinance, one that includes protections for LGBTQ people. “Though I agree with it’s substance, I find the wording very convoluted,” he said.

Alaskan cities have been slowly incorporating non-discrimination language into city code. Anchorage was the first in 2015, followed by Juneau last year. Wein noticed that a lot of the language from the capital city’s equal rights ordinance wound up in Sitka’s. “I would like to do is encourage people in the public to go online and just read it,” Wein said.

The ordinance explicitly prohibits discrimination in employment, in housing, and in access to public accommodations. The law protects across race and religion, age and disability, gender and sexual identity. It’s an equal rights law, essentially, and one Sitka hasn’t had.

Assembly member Kevin Knox co-sponsored the ordinance with Vice Deputy Mayor Bob Potrzuski. “Even though some of these protections are provided under state statute, it’s important for Sitka to stand up and say: these are the values of this community,” Knox said.

Sitka recently received a slap on the wrist for this by a civil rights organization. Last month, Human Rights Campaign Foundation published their municipal equality index (MEI) report, grading U.S. cities on their level of protection for LGBTQ citizens.

Mayor Matthew Hunter remembered getting HRC’s survey and realizing it would take hours of staff time, did not send it in. When the report came out, Sitka got a grade of zero and lead photo in an NBC article, titled, “These 11 Cities Failed an LGBTQ Equality Evaluation.” 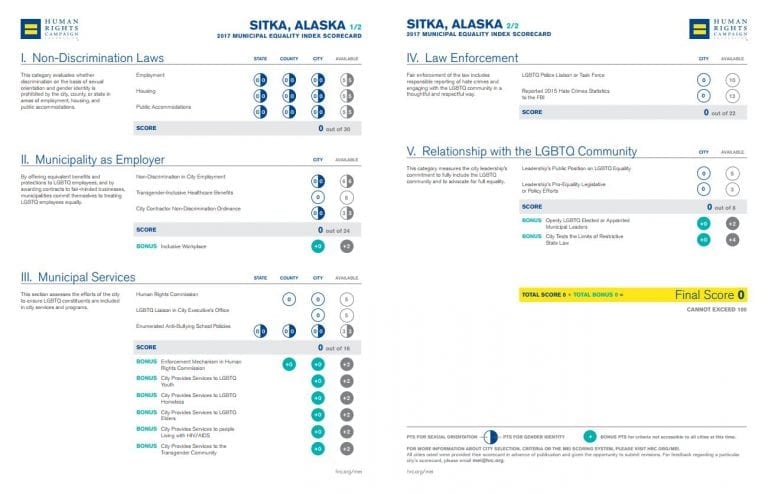 Sitka was one of 11 cities to receive a zero grade from the Human Rights Campaign’s annual municipal equality index (MEI). Some members of the Sitka Assembly began exploring an equal rights law for Sitka over a year ago. (Screenshot from HRC report)

Hunter was frustrated by the bad press and shared this story with the Assembly Tuesday night. “That was frankly a very dishonest move on the part of the HRC to do that,” he said.

Xavier Persad, who wrote the report for HRC, said the scorecard is based only on written laws and policies. Returning the survey wouldn’t have changed Sitka’s zero grade, but may have awarded the community some bonus points. He added that the scores are not meant to shame cities. “It’s simply a snapchat of what exists in law and policy currently and a measure of how cities can grow from year to year,” Persad said.

With an ordinance now at Sitka’s table, Hunter called it “a just and noble cause for the city.” He said, “That is where as a society we’re moving. It’s sort of the civil rights campaign of my generation.”

Discrimination does happen in Sitka and the notion of a local equal rights ordinance was hatched over a year ago by then-Assembly member Tristan Guevin. It didn’t come to the Assembly table until now. Co-sponsor Knox said its appearance is independent of the HRC report.

Knox also noted that in the past four years, 54 complaints of discrimination had been filed with the Alaska State Commission for Human Rights by Sitkans. “Twenty two of which, under state statute and protections, went forward into mitigation or some action,” he told the Assembly. “That’s only the people that have gone forward and made complaints and understood that they have that power through the Alaska state Human Rights Commission.”

With this law, Sitkans would be able to file their complaints in local court. It’s not all-encompassing, however. Religious organizations, private clubs, and designated same-sex spaces do not have to follow these nondiscrimination rules.

While Assembly member Aaron Bean was in favor of the ordinance overall, he was concerned about inscribing identity into local law. He called some the language “totalitarian.” He said, “A lawsuit can be brought fairly easily based on interpretation and utterances of identity. I don’t agree that, for example, if you’re born a male, biologically speaking you’re a male. That’s a societal construct that I think is pretty fabric to society. I don’t see how legislating and mandating language would in some way help.”

Assembly member Ben Miyasato then turned to city attorney Brian Hanson and asked, “Is there anything in this ordinance that needs changing?” Hanson said it’s all legal, so any modifications would be at the political will of the Assembly. They’ll have another two weeks to look it over and take public comment, before a final vote.