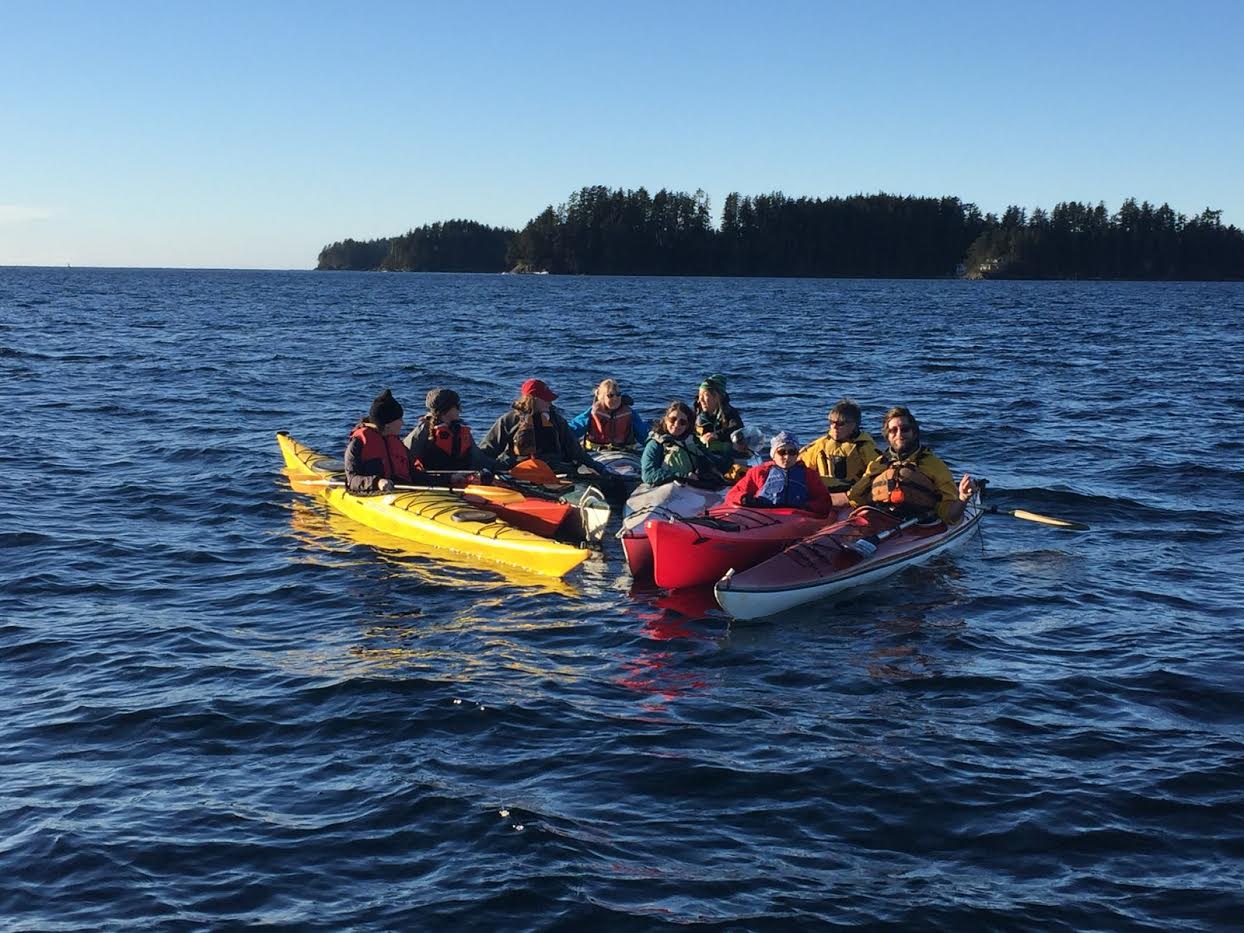 Oceanographer Kate Stafford recently took a group on the water in kayaks, armed with  underwater microphones- dipping hydrophones- in the hopes of hearing whales. Photo/Angie Bowers

Whale watching is a popular pastime in Alaska, but what about whale listening? Dr. Kate Stafford does it for a living. She’s been in Sitka this November for the Science in Residency Fellowship, and on a winter day recently she took a group out on the water to try to capture some sounds, and songs, from some of Sitka’s most vocal creatures.  KCAW’s Katherine Rose reports.

Hear that gurgling? That’s sound from under the ocean’s surface, recorded by Dr. Kate Stafford from a kayak in Sitka Sound. Stafford is an oceanographer who studies underwater soundscapes, and the sounds made by marine mammals.

“A soundscape is basically a combination of all the sounds in an area,” Stafford says. “Underwater and in Sitka Sound, for instance, you might expect the soundscape to be dominated by wind noise, perhaps. Small boats. Fishing boats. And this time of year, probably humpback whales.”

She spends a lot of time in the Arctic recording sounds and peeling through the data. She says sound can tell us a lot about what’s going on beneath the surface of the water.  Right now, she’s working on research about bowhead whales…the jazz singers of the arctic…

“Bowheads can live up to 200 years. They’re really long-lived species,” Stafford says. “They can push up through a foot and a half of ice. So in so many ways they’re superlative animals. When you add to that the fact that they sing…loudly and crazy and abundantly, it makes them even more interesting.”

But Bowhead whales aren’t in Sitka. So today, she’s taking a group out on the water in kayaks, armed with  underwater microphones- dipping hydrophones- in the hopes of hearing a little more local. We’re hoping for Humpbacks.

“Humpback whales are the known singers of the whale world. They sing these elaborate regular patterned songs,” says Stafford.

A kayak on Sitka Sound is not a very friendly place for expensive electronics — I decided to leave my pricey digital recorder on the beach. Stafford has a bolder strategy: She opens a plastic bag with a Tascam recorder and a bunch of grey and white wires from a plastic bag connected to a small microphone shaped like a pill. Then she pulls out an Altoids box and opens it up to reveal a tiny speaker. She lowers the hydrophone in the water and we begin to listen intently, our ears pointed toward the tiny mint tin.

We hear the sounds of our kayaks knocking into each other in the wind. And we hear big boats passing. We wait for about 15 minutes, then move again. Still no whale sounds. Just boats.

Stafford says there’s a lot to be learned about the ocean’s health by monitoring the sounds of the ocean. Those boat noises? They can be problematic.

“The increase in shipping and oil and gas extraction offshore is putting a lot of noise in the water,” says Stafford. “It would be like putting your house and your restaurant and grocery store, underneath a busy highway.”

That highway complicates things for whale communication. “The noise itself raises the background level, so you have to shout a little louder to be heard or you have to be closer to the people you’re communicating with to be heard,” Stafford says.

And Stafford says in some ways, we can even hear climate change. First, with less sea ice, there are more storms in the Arctic, higher winds and waves. That means more noise in the water. AND we can hear different species moving north.  “Warm water species are suddenly showing up further north. So now in the arctic in addition to bow-whales and beluga whales, we’re starting to hear humpback whales, killer whales, more often and later in the season,” Stafford says. “Because there’s less sea ice. So in that way we’re getting this unique perspective on how the climate is changing.”


Although we give it about an hour on the Sound, Stafford’s kayak team doesn’t hear any humpbacks today. Luckily Stafford has a fallback: A few days ago she went out on the water with whale biologist Jan Straley to install  a more durable hydrophone. Over the course of several days suspended in the ocean, the recorder  collected plenty of boat sounds –and listening back, humpbacks feeding and singing.

So it’s clear that some humpbacks are still hanging around in Sitka Sound. That’s what it sounds like, anyway.