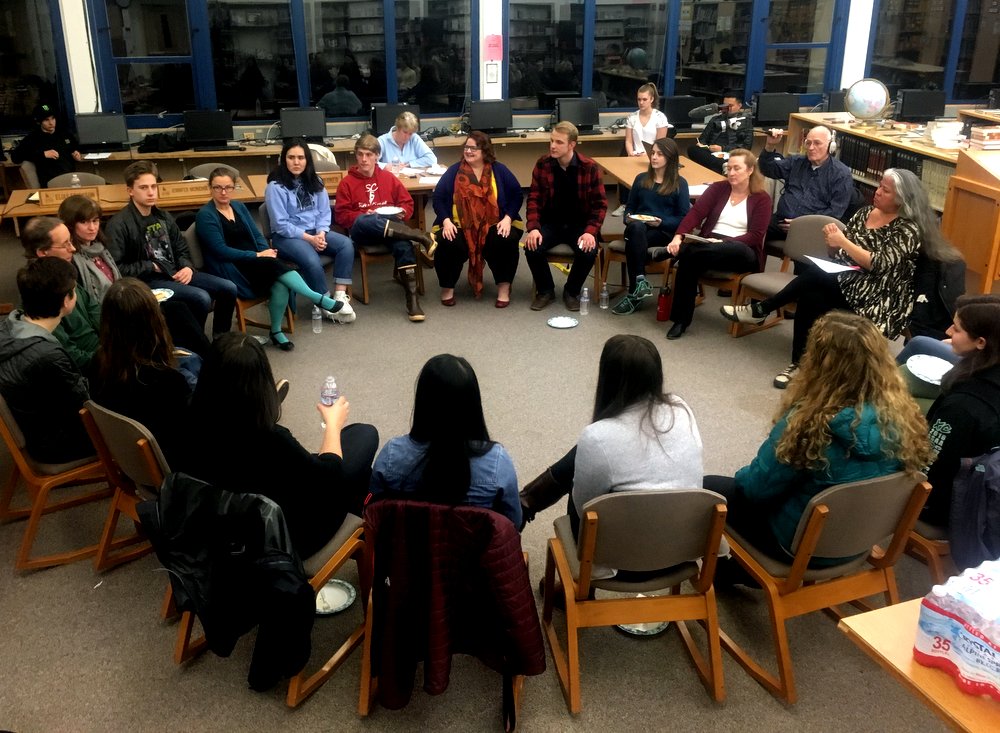 Prior to Monday night’s (12-4-17) session on school counseling, members of the Sitka High student government met with board members. The students agreed to continue advocating for school funding in the legislature. But they also had a request of their own: Water fountains that can fill bottles. (KCAW photo/Robert Woolsey)

The Sitka School District’s counselors are taking the offensive, as the administration begins to outline next year’s budget.

Counselors from every building shared an hour-by-hour look into their work days, for the Sitka School Board Monday night (12-4-17), and the range of emotional and behavioral issues they typically address.

For Jeanine Brooks things start before her official work day, when she checks in with teachers about students who might be struggling, and they develop strategies to help those students be successful.
It’s far from what you might expect, like tardiness, or forgetting a lunch box.

“Last year I had six students out of a very small population at Wooch.een Yei (preschool) and Baranof who had lost a parent to death due to substance abuse. There are 33 kids in foster care or kinship care. So all of those children are bringing to school intense grief that gets in the way of their learning.”

Brooks described for the board how she feeds, clothes, counsels — and drives to school, if necessary — up to half of all students in elementary school over the course of a year.

Brooks has a Masters Degree in Social Work from UC Berkeley, and 28 years experience in social work, 18 of them at Baranof Elementary and Wooch.een Yei preschool. She’s one of the district’s six counselors — most of whom share her level of academic qualification, if not her years. In fact, one of the Sitka School Board members, Quinlynn Holder, even remembers Brooks in action.

“And I didn’t even mention the fun part, Quinlynn… Then there’s my puppet work that I get to do, which is totally fun. I’m still doing Kelso the Frog, who is in his 24th year at Baranof Elementary. He’s been there longer than I have.”

Except for Kelso the Frog, not much in the daily life of a school counselor sounds like fun. The problems students face reflect the problems of society: Psychological abuse, physical abuse, sexual abuse, and emotional neglect are only 4 of 10 areas of trauma experienced by a portion of Sitka’s student population.

Like Brooks, Quevedo regularly sees about 35 of the 412 students in 2nd through 5th grade, but can be called in to assist with behavioral problems anywhere in the school. As students grow older, so do some of the issues. At Keet, students are beginning to reckon with not just making friends, but keeping them.

“And I help coordinate a restorative practice where friends will come to the counseling room and we’ll do a circle to try and figure out how they can be friends again.”

In middle school, friendships are complicated by hormones. Blatchley counselor Jael McCarty has to manage that — both in the real world, and in the digital world where students spend so much time interacting. And she has to teach two periods a day of P.E.

“We deal with the cyber-stuff: Cyberbullying, Snapchat, all the stuff that goes on there. This is all stuff that comes up in middle school. On top of that I do all the scheduling, and the changes of schedules. So I field a lot of parent phone calls, My kid doesn’t like this class, can he take this class, why not?, why is it too full? I do the Migrant Ed programming, trying to figure out what our Migrant Ed students can benefit from and trying to figure out how to implement that into our school. I’m also a member of the district TIPS team — Team Initiated Problem Solving. So I’ve got my hands in a lot of different things. On top of that I teach the last two periods of the day. At the end of the day I go check in with Ben (White) to make sure I didn’t miss anything during those times that I taught so I don’t need to catch up. Other than that… it’s crazy! (audience laughs) I’m going to go gray by the end!”

At the high school level, counseling splits into two tracks — Ben Cordero provides academic counseling and career guidance, and Cory Schumejda tackles issues that have now taken on a more adult character, like substance abuse and intimate partner violence among others.

Again Quinlynn Holder, who represents the Sitka Student Body on the school board, thanked the high school counselors for their work, saying that she’d “cried many times in their office since freshman year.”

Holder said she first recognized the importance — and the availability — of school counseling when she was having a tough time in 8th grade.

“And I hadn’t built up the courage to talk to my parents about seeing a therapist or someone like that. And it was crazy talking to her. It’s so different from talking to your parents or your friends or a different community member because it’s someone who’s trained to talk to you about your feelings and how to work out what you’re feeling.”

The school board won’t begin hammering out next year’s budget until after the New Year, but president Jen McNichol warned that there were some who considered the district’s counseling program to be “low-hanging fruit.”

Hence almost an entire school board meeting devoted to learning exactly how counselors spend their time.

“We want this conversation to be out in the community, so that the community values this resource that we are so fortunate to currently have. But it’s not guaranteed — as is nothing guaranteed — at this point in this economic climate we face. So we need community support.”

Maggie Gallin counsels at Pacific High. Also a professional social worker with a graduate degree from Columbia, Gallin urged the board to continue her position after federal grant funding ended next year. Without counseling, Gallin suggested that the district would never achieve its goal of 100-percent student success.

“Because expecting a student to perform academically, or expecting the dropout rate to decline, when we’re not helping students and families meet their basic needs, is going to be a dead end.”