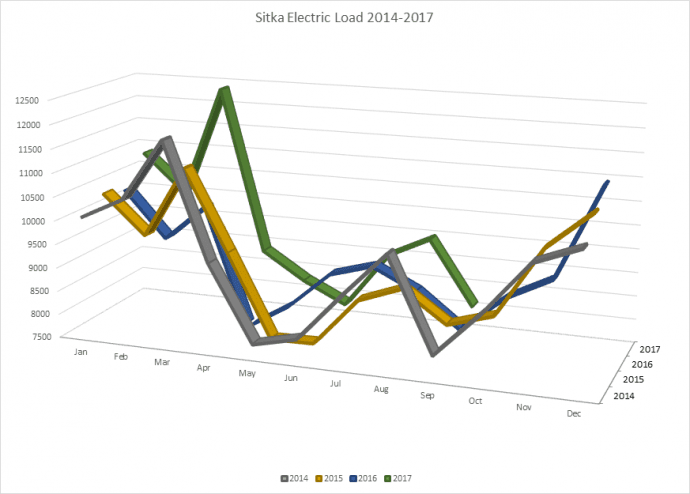 Electricity use in Sitka rose 4% between March and October and has tracked at higher volume this year, compared to the previous two years. The Blue Lake Dam was completed in 2014. (Graph courtesy of CBS Electric Department)

With an abundance of clean power and a hydroelectric dam to pay for, Sitka wants to attract customers to join the city’s electric grid. On Tuesday night (12-12-17), the Assembly approved an incentive program that would offer big commercial customers electricity at a discounted rate for the first three years. The program plan fits into the city’s overall strategy to grow the electric load and lower rates in town.

As the year 2017 comes to a close, there’s one trend in Sitka that Utility Director Bryan Bertacchi is especially happy about: the uptick in electricity use. Holding a chart in his office on Jarvis Street, he pointed to a green line. “You can see how much higher it is that just these previous years, especially if you look at that yellow line and the blue line,” he said.

The yellow and blue lines represent 2015 and 2016, which saw electric use plummet in Sitka and the Assembly raise rates accordingly – to the frustration of citizens. To soften the rate swell, the Assembly approved a seasonal rate structure of 12-cents in the winter and 19-cents in the summer.

But this year, Bertacchi says, the opposite trend is happening. Between March and October of this year, electricity use in Sitka increased by 4%. That’s what the green line represents.

KCAW: When you saw this line, how did you react?

Bertacchi: You know, I was very happy. It was at least worth a margarita.

The increased revenue also meant the city was able to meet the bond payment on the Blue Lake dam without an additional transfer of $400,000 from the general fund, which the Assembly approved in April.

So how did a city on an island grow it’s electric load?

Bertacchi thinks some of it has to do with new home construction and businesses burning more megawatts for the city. “We’ve had a brand new hotel [the Aspen Hotel] go in downtown. We’ve had marijuana grow businesses downtown,” he said.

The Electric Department is also actively working to bring more customers online. Next year, Bertacchi is looking to outfit Keet Gooshi Heen and Baranof Elementary Schools with electric boilers. He’s in talks with the Coast Guard as well. “That will help electric rates for everybody in this community, to have those extra users. We have to look ahead and plan for all those things. It doesn’t happen by magic,” he said.

That kind of thinking that gave rise an electricity incentive program, which the Assembly debated Tuesday night (12-12-17). The program gives large commercial customers a break for the first three years they come on the city’s electric grid. “Large” is a defined a customer estimated to spend over $75,000 on electricity annually. An earlier version of this ordinance set the threshold was $150,000, but the Assembly sent it to a committee in November to restructure the language and make the program friendlier to small business.

Mayor Matthew Hunter, who co-sponsored the ordinance with Assembly member Kevin Knox, hopes the lure of clean energy at a discounted rate will convince a company to open up shop in Sitka. Read the ordinance, which adds a subsection to Sitka General Code, here: Ord 2017-39S

“If that resulted in 50 jobs or even 10 jobs, I would see that a being a very worthy use of our electrical resource. Currently we have megawatts of power that’s flowing over the dam. So any drop of water that we could turn into revenue would benefit the electrical users in town,” Hunter said.

Assembly member Steven Eisenbeisz isn’t holding out hope for a dream user to come along. He predicts the ordinance will instead motivate existing customers to transition from diesel to electric. He also took also with the fact that the ordinance doesn’t specify what the discounted rate would be. “While this ordinance may pass tonight, I think I’ll be talking with the electrical director on setting a rate in stone,” he said.

Because right now, the ordinance gives the city administrator the authority to set to “authorize and approve a temporary incentive rate” with the customer on a case-by-case basis.

Assembly member Richard Wein also preferred to fix the incentive rate, reversing his opinion from last meeting. “When people make business decisions that want to see what their issues are at the outset, so they know if [Sitka] is the place to be,” he said.

In the end, the majority of the Assembly preferred giving the city administrator the discretionary power to set a rate. The Assembly approved the ordinance 6-1, with Wein voting against.

Bob Potrzuski made a case to pass the ordinance as written and give the city the power to negotiate with potential electric customers.

“If we set the rate, “Ooo, just a skosh too high,” for that multi-million dollar to-be-named later company, I’d hate to lose that opportunity. Whereas if we give the administrator and the electrical department an opportunity to encourage them to come by lowering it to whatever their capital needs are, I might be swayed in that direction,” he explained.