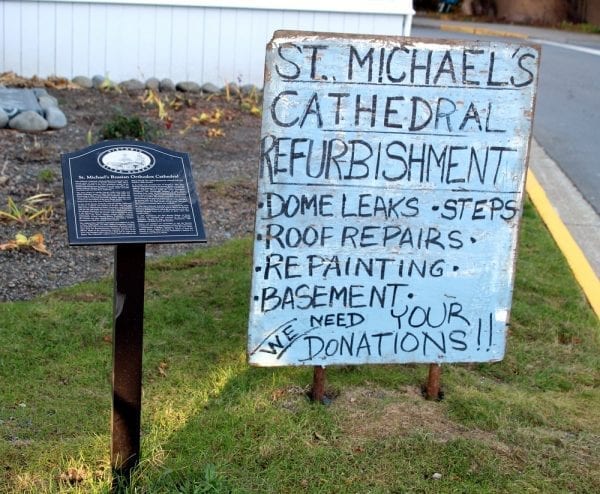 St. Michael’s Cathedral is undergoing a $132,000 refurbishment. The iconic building is a fixture of downtown Sitka, a replica of what was likely the first Orthodox cathedral in the Western Hemisphere (KCAW photo/Robert Woolsey)

St. Michael’s Cathedral in Sitka may get a $5000 boost from the city for exterior work, after the city attorney determined their donation would be legal. The Sitka Assembly approved the donation on first reading Tuesday night (12-12-17).

A focal point of downtown Sitka, the building is a replica of the historic Orthodox cathedral lost to a fire in 1966 and has major structural problems now, earning it a spot on a state list of “endangered properties.” There’s a leaking roof and a basement prone to flooding.

To help cover the cost of renovating the cathedral, Assembly members Steven Eisenbeisz and Bob Potrzuski co-sponsored an ordinance to donate $5000 to the from the Visitor’s Enhancement Fund. The fund, with a year end balance of $304,039, is made up of the 6% paid by every person who rents a bed at a hotel, motel, or bed and breakfast in Sitka.

Assembly member Aaron Bean spoke against the measure when it first appeared on November 7th, saying it violated the separation of church and state. Though it passed on first reading, Potrzuski postponed a second vote during the November 28th meeting to resolve any legal concern.

With a rewrite, the ordinance came up again this Tuesday specifying the donation be 1) deposited into a renovation fund account, separate from the church’s general fund, and 2) be used only on exterior work to the building.

In a memo, city attorney Brian Hanson wrote that those changes made the donation “permissible and not violative of the First Amendment Establishment Clause.” You may know it from high school history class: “Congress shall make no law respecting an establishment of religion, or prohibiting the free exercise thereof.”

Hanson also determined the donation passed the “Lemon Test,” taken from the 1971 Supreme Court Case Lemon vs. Kurtzman as a “church v. state” barometer for the lower courts. Applying the three-prongs of the “Lemon Test,” Hanson said it passed because the donation 1) is for a secular (public purpose), 2) neither advances nor inhibits religion, and 3) does not result in excessive entanglement of the municipality with religion.

The ordinance passed on first reading by a vote of 5-2, with Steven Eisenbeisz and Aaron Bean voting against. It will come up again at the Assembly’s last meeting of the year on December 26th.