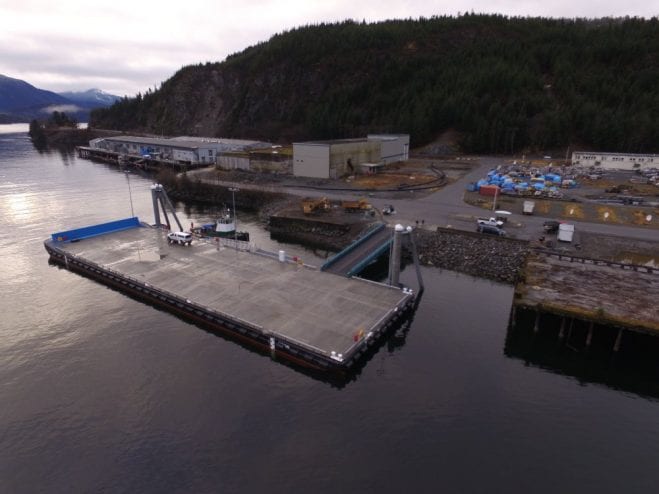 The multi-purpose dock is near completion, with an opening slated for January 2018. The contractor, Turnagain Marine Construction, has left the site and electrical systems still need to be installed. The procurement process for awarding the contract to Turnagain caught the attention of former Mayor Marko Dapcevich, who believes the City of Sitka violated the charter (Photo courtesy of the Gary Paxton Industrial Park)

A public interest lawsuit played out in Sitka last Tuesday (12-12-17) for a case involving a dock and a disagreement over the municipal charter. Former Mayor Marko Dapcevich filed suit against the City of Sitka for what he considers a violation of the competitive bid process. Rather than go to trial, Dapcevich and his attorney are seeking summary judgement.

In a brightly lit courtroom, with oil paintings on the walls, sat two parties and no judge. That’s because Ketchikan Judge Trevor Stephens was listening to legal proceedings over the phone, in a civil suit filed by former Mayor Marko Dapcevich against the City of Sitka last March.

And the dispute boils down to this question: when the city awarded the contract to build a floating dock at the Gary Paxton Industrial Park, did they violate Sitka’s charter? Dapcevich says they did. The city says they didn’t.

Representing Dapcevich, attorney Joe Geldhof said the charter was broken the moment the bids came back too high for the multi-purpose dock.

Four consultants sent in responses that were over the $6.8 million dollar budget. Rather than call for new bids, the GPIP board asked those same consultants to go back to the drawing board and come back with a design that fit the budget. The plan they chose, from Turnagain Marine Construction Corp., was determined the “best value option” for Sitka.

Geldhof argued that process did not meet the charter’s criteria for “true and competitive bidding.” He said his client is not seeking an injunction to stop the dock project, which has picked up speed considerably this winter, but to hold the city accountable for, what in his words, was a “modern procurement process” that violated the city’s charter.

Geldhof repeatedly said, “This not an error of commission, but a sin of omission,” one that circumvented the competitive bidding process in the haste to get the project done. Dapcevich later told reporters the city should have instead re-advertised once the bids came back too high. The envisioned floating dock, a refurbished 250-foot steel pontoon with a concrete deck, will provide space for commercial in-water boat work and the freight and fishing industries.

In Sitka’s defense,  Anchorage-based attorney Michael Gatti said the city was well within the legal definition of “competitive bidding” when it awarded the dock’s contract and called Dapcevich’s interpretation “overly literalistic and narrow.”

Gatti argued the design-build process, which the city used, was truly competitive and that the contract was given to lowest qualified bidder — emphasis on the word qualified. In other words, the Turnagain contract was the best, even if others had submitted plans that may have cost less.

Gatti also defended former city administrator Mark Gorman and current mayor Matthew Hunter, who Dapcevich also named in his lawsuit. Gatti said they were acting in the interest of the public – working within budgetary constraints to create economic activity at the Gary Paxton Industrial Park – and should not be held personally liable.

At the end of oral arguments and rebuttals, Judge Stephens said he hoped to deliver his decision before the end of the year.

Speaking with reporters after the court stood in recess, Dapcevich said if he lost, he did not plan to file suit again. But he seemed confident the Judge would rule in his favor, stating, “I think the facts speak for themselves.”

Turnagain’s Brightwater barge and crane at work on the GPIP Deep Water dock earlier this month: