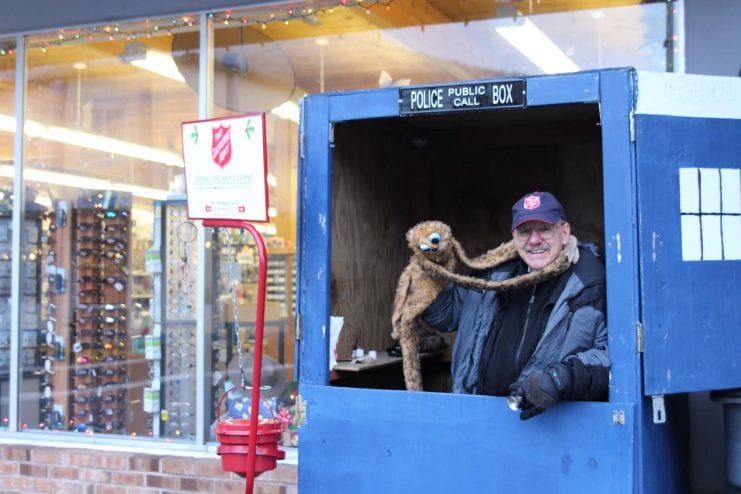 Joe Murray and Hanger ring the bell for the Salvation Army. They stand inside a shelter modeled after the Tardis from British sci-fi television show Doctor Who. (Photo KCAW/Katherine Rose)

In most cities, the arrival of Salvation Army bell ringers is a sign that the holiday season is upon us. Although many ringers stand in the open by their red collection kettles, a lucky few have shelters which are traditionally red as well. In Sitka, the ringers stand in a different sort of shelter — one that fans of classic British science fiction television will recognize instantly.

As part of our continuing series “Curious Sitka,” KCAW’s Katherine Rose takes a trip through time and space to learn more about the town’s special blue Salvation Army boxes.

Major Joe Murray is ringing a bell on Lincoln Street. Accompanying him is Hanger, a brown furry puppet with big blue eyes with long, floppy arms.

KCAW- What are you guys doing out here today?

Murray- We’re out here trying to raise money for the Salvation Army, and it’s a good time to do it because people are in a cheerful mood and they have the spirit of Christmas. 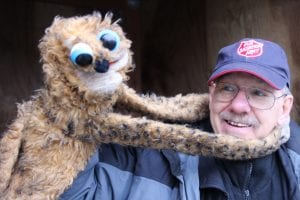 A passerby puts some change in the kettle, and her dog catches Hanger’s eye.  I ask Hanger if he likes dogs.

Hanger- Of course! I’m half dog anyway.
KCAW- Half dog and half what?

Hanger- Uh, yeah, half what!

Hanger gets children’s attention and causes passersby to pause, which is the goal.  But it isn’t the only thing that makes this Salvation Army stand a little unique. Joe and Hanger are standing inside a big plywood box.

“Being exposed to the elements kind of goes along with the territory,” says David Kitka or “Alaska Dave” as he is known to many. He says the shelters are necessary because volunteers are often exposed to inclement weather in Sitka. He’s been working with the Salvation Army since 2008, and says Brian Weddle reconstructed the red boxes and painted them in 2015.

“It wasn’t constructed as well as it should have been, it kind of fell apart, we figured we’d go ahead and start on a new shelter,” Kitka says.

But this box isn’t the traditional red. It’s blue with white window panes and text at the top that says “Police Box.”

“At that time it was just coming off of the Doctor Who 50 year,” says Kitka.

Doctor Who- you know the British science fiction show about a time traveler called “The Doctor.” The show has been around since 1963, and its being rebooted for the 10th time this year.

“All of us, the Majors included, really enjoyed Doctor Who,” says Kitka. “We thought it would be a great idea if we just enjoyed them and painted them Tardis Blue.”

In the show, the characters travel through time using something called a “Tardis” which is disguised as a blue police box. A common site in the U.K. in the 1960s  when the show first aired, which Kitka says made it perfect as a disguise for the doctor’s spaceship.

“I’m paraphrasing but the Doctor said ‘we as humans forget that something is there, we just walk right by it without even noticing it,” Kitka says.

But the doctor’s strategy has the opposite effect for Kitka who knows that the Tardis blue paint doesn’t blend into the background at all. It attracts a lot of attention.

“It kind of plays in our favor because we have a lot of people who are doctor who fans that come and give us nods of approval, and they come peek inside to see if it actually is bigger on the inside of course.”

Kitka says he’s not sure there’s a link between Dr. Who and the Salvation Army other than the fact that both originated in the U.K.  The new Doctor Who special which airs on Christmas day will see the introduction of a new doctor- a woman and a series first.