Trollers call for chinook management ‘with a scalpel, not a sledgehammer’ 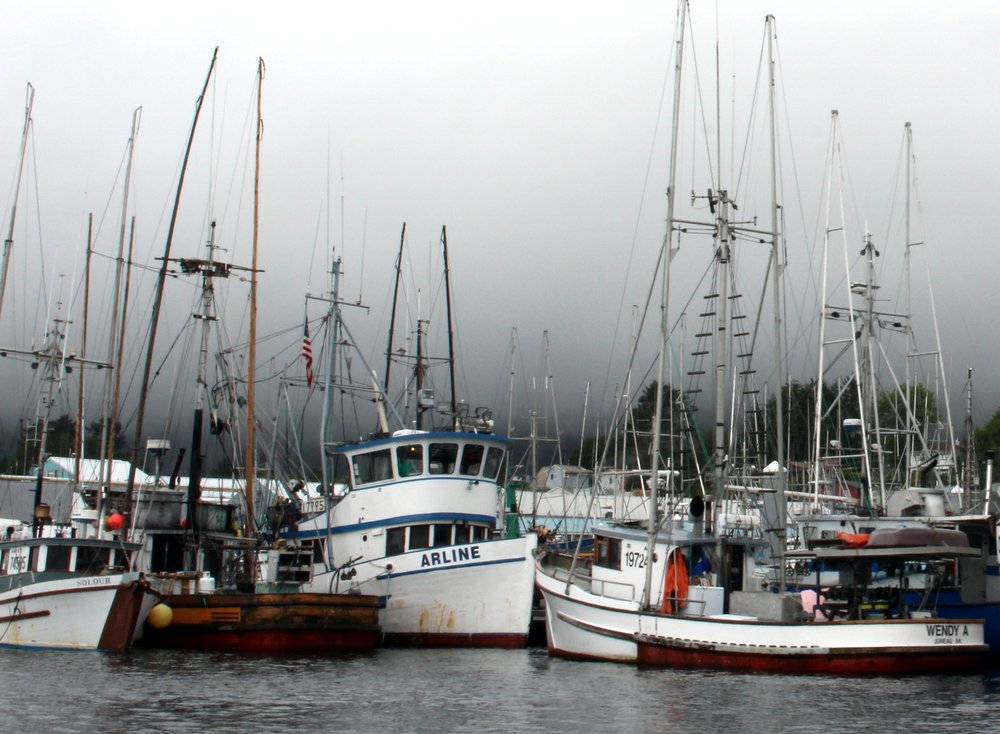 Trollers in Sitka’s Eliason Harbor. Extended king closures worry many. “There’s so much down time that a guy’s got to get another job,” troller Caven Pfeiffer told the Sitka Advisory Committee. (KCAW file photo)

Fishermen in Sitka are pushing back against a proposed king salmon conservation plan that could impose deep restrictions on fishing seasons in 2018.

The local Fish & Game Advisory Committee instead has offered some strategies of its own for protecting chinook returning to three major Southeast river systems. They’re calling it “management with a scalpel, instead of a sledge hammer.”

The Alaska Department of Fish & Game released a set of proposed action plans for the jeopardized king salmon stocks on the Friday before Christmas. In order to beat the December 28th submission deadline for written comments to the Alaska Board of Fisheries, the Sitka Fish & Game Advisory Committee — which is comprised of local fishermen and harvesters — hastily convened on the evening of the 27th to draft a letter.

“Now listen carefully, this is going to be important…”

This is acting committee chair Eric Jordan, reading a draft of the letter to the audience of about twenty commercial trollers and fisheries managers. He’s about to throw down a big concession.

“Notwithstanding any remaining seasonal guideline harvest level, close the winter troll fishery in all the waters of Southeast Alaska beginning stat week 17…”

Editor’s note: The AC subsequently amended this further, and proposed restricting the winter troll fishery in District 13 only — essentially, the waters around Sitka where the majority of all winter kings are landed.

Statistical weeks are how the state tracks fishing data, beginning at the new year. Stat week 17 this coming season begins on April 15th exactly. Historically, the latter half of April has been some of the best winter fishing in Southeast — and prices for kings caught that time of year have topped $10 per pound.

But it’s also the time when Sitka trollers catch a small-but-statistically-significant amount of king salmon bound for the Unuk River near Ketchikan — which has now been designated a “stock of concern” by state fisheries managers. And that’s why the Sitka Advisory Committee was ready to bite the bullet on two of the best fishing weeks of the winter, says Jordan.

“If we’re going to go by the best data we have, then we’re going to have to bring the tough news to you that we catch enough Unuk River king salmon in the Sitka area — mostly right out here off the Cape — in the last part of April, that if we want to contribute to saving those king salmon, that would be the best time to do it.”

What Jordan and other members of the committee — and probably the entire Southeast troll fleet — would like to avoid is another season like 2017, when precipitously low returns to the Unuk, Chilkat, and King Salmon rivers forced managers to close most spring fisheries near those rivers, and to close the region-wide summer king salmon fishery after only 4 days. On top of that, the traditional August opener was never held, and winter fishing was opened in October, with the expectation that it would close in mid-March — about 6 weeks early.

The three “action plans” proposed by Fish & Game for 2018 all contain the possibility of similar restrictions in 2018. Caven Pfeiffer, a troller for 10 years out of Petersburg and Sitka, told department managers present that he would not have got into fishing if someone told him that he’d be unemployed for four months a year.

“That’s so much down time that a guy’s got to get another job. You’re talking about gutting this fishery. This is extremely heavy-handed stuff that’s going on. There’s no way that young fishermen are going to get into this business if they can’t count on Fish & Game to look for the less abundant areas to let us fish.”

And that’s exactly the angle taken by the Sitka Advisory Committee as it wordsmithed its letter to the Board of Fisheries. The committee suggested amending the department’s proposed action plans to eliminate the broad strokes — like delaying the start of summer trolling by a week or more — and to focus instead on targeting the times and areas when king salmon are known to be migrating into the three problem rivers.

The Committee also proposed adding language to ensure that the August opening would happen — no matter what — and that it would target 30-percent of the kings allocated for summer fishing, since by that time all of Southeast’s spawning kings would have made it to their home rivers — if they were going to make it at all.

That’s a significant point: No one on the Advisory Committee or in the audience denied that there was a serious problem with returns to the Chilkat, Unuk, and King Salmon rivers. Rather, there was consensus that there was a way to work around those fish, and still keep fishermen in business.

Deb Lyons, a troller who works with the Chinook Futures Coalition, supported the efforts of the Committee to fine-tune the action plans.

(Note 1-10-18: The original version of this story misidentified Deb Lyons as the executive director of the Pacific Salmon Treaty Coalition. She left that position in October, 2017.)

The Sitka Advisory Committee approved (with one abstention by member Andrew Thoms) its proposed recommendations to the Board of Fish — including ending the winter fishery near Sitka two weeks early — and delivered its letter by the December 28 deadline.

The Alaska State Board of Fisheries will meet in Sitka beginning January 11, and is scheduled to take up salmon issues on January 15.