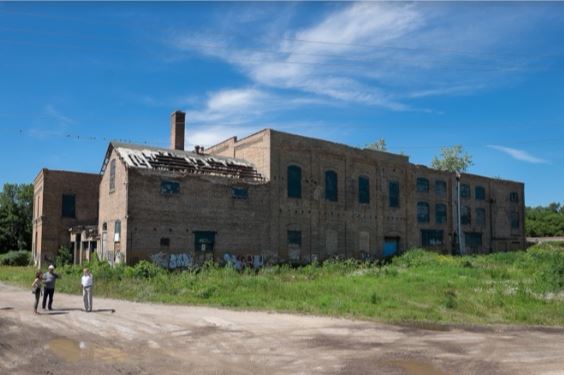 Sitka Salmon Shares’s new home. The Garver Feed Mill has been vacant for 20 years, but has a choice location in Madison. Company president Nic Mink says they’ll build “a transformative distribution, packaging, marketing, and retail center” on the site.

A boat-to-table seafood processor in Sitka is expanding its retail footprint in the Midwest.

Sitka Salmon Shares has just completed a deal to join some other high-end food retailers and manufactures in a renovated mill in downtown Madison, Wisconsin.

Sitka Salmon Shares resembles Community Supported Agriculture — but with a twist. Instead of getting deliveries of locally-harvested produce from nearby farms, customers in Illinois and Wisconsin are getting sustainably-harvested salmon, from fishermen-owners in Sitka.

It’s the brainchild of Nic Mink, who teaches Food Justice at Knox College in Galesburg, Illinois.

“I start teaching on Thursday. I’m dreading it. (Laughs) No, I’m super-excited. But yes, I only teach part-time now.”

That’s because the company he started with Port Alexander troller Marsh Skeele seven years ago with a couple of boats, is on its way up to a fleet of 40, with a state-of-the-art processing facility in Sitka, and regional packaging and distribution hubs in Galesburg, Chicago, and now Madison.

Mink says Salmon Shares will add about 8 positions in management, sales, and marketing in Madison. The operation will take up a sizeable chunk of the 55,000 square foot historic Garver Feed Mill, which has been vacant for over 20 years.

“It’s right in the middle of the city. It has this incredible 100-acre site. It’s perfect for light manufacturing. And we became one of the lead lessors in the building. So we’ll be there with a kombucha manufacturer, an ice cream manufacturer. So there are going to be about 8-10 mid-scale businesses in this facility when it’s ready to go in about a year.”

The growth has brought changes on the back end as well. Salmon Shares co-founder and vice-president Marsh Skeele grew up salmon trolling with his parents out of Port Alexander and Sitka. Last season, for the first time, he left his boat tied up and spent much of the summer working on the company’s expansion in the Midwest.

Skeele attributes the growth of Salmon Shares to growth in demand for good fish. Not just a good fish — but a perfect fish– which is what many trollers strive to produce.

“And there’s no comparison when you take hook-and-line and small boat fisheries and you work directly with the fishermen. That — hands down — is the only way to get really consistently perfect fish.”

Skeele is speaking from a hammock at his parent’s house on the Baja peninsula in Mexico. He’s taking a short break now, but he’ll be back to Sitka in February to work on building the roster of Salmon Shares owner-fishermen from its current 20 to a planned 40 over the next couple of years.

Those who know Skeele don’t have to be concerned that he’s gone corporate. He’s got one sport coat for fancy dinners, but the rest is unchanged.

The informal approach is working. The Salmon Shares website tries to make customers feel like participants in Alaska’s laid back fishing culture. Company president Nic Mink says that it’s not just about selling fish, but educating consumers about the markets. Next season, with deep restrictions on king salmon likely, that may mean shifting some emphasis to the rockfish jig fisheries in Kodiak, for example. Or to an unsung species closer to home.

“We’re doing a lot right now to educate our members about the beauty of chum salmon.”

Mink says no salmon takes a marinade better than chum, and that “midwesterners love to marinade.”