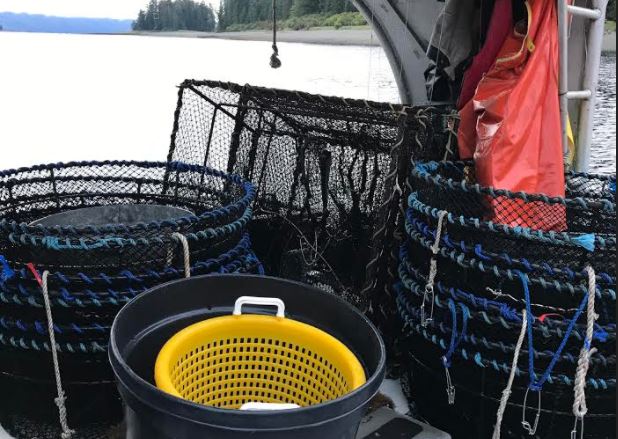 The Alaska Board of Fisheries voted Sunday to limit the subsistence shrimp harvest in Hoonah Sound to 10 gallons per day, per household. (Photo/Mollie Kabler)

The Alaska Board of Fisheries has decided to limit the amount of shrimp harvested and require a non-commercial household permit for subsistence fishing. This, following a recommendation from the local Sitka Fish and Game Advisory Committee to take emergency action to protect shrimp from overfishing in Hoonah Sound.

The board voted Friday (1-12-18) that the fishery met the criteria for emergency management. Then, on Sunday (1-14-18) they voted to limit the daily bag and possession to 10 gallons of shrimp per household with a permit.

Board of fisheries member Israel Payton said they came to the decision about that daily amount after further discussion with area subsistence users. “It was felt that the ten gallon per day per household permit was the preferred method,” Payton said, “and I think that that limit will meet the subsistence requirements myself.”

Hoonah Sound is a popular commercial, subsistence and recreational fishing area about 50 miles north of Sitka. And lately, it might be too popular. Hoonah Sound saw a dramatic reduction in commercial shrimp stock in the last two years. Between 2016 and 2017, the number of spot and coonstripe  shrimp in the area fell by half, and samples from the 2017 stock showed the lowest average length on record.

ADF&G observed these numbers and reduced the commercial harvest from 26,000 to 16,000 pounds for the 2017-2018 fishery. But no limitations existed for subsistence users. Board of Fisheries chair John Jensen noted his concern for the fishery.

“It is unforeseen,” Jensen said. “It seemed like it dropped dramatically. And there weren’t any studies on it. It just raises it to the level of an emergency as far as I’m concerned.”

On December 14, the Sitka Fish and Game Advisory Committee submitted a petition to the Alaska Board of Fisheries requesting that the board organize a working group that would determine a course of action for management of the area.

“Last year the guideline harvest for all of district thirteen I think was closer to 30,000 pounds for commercial. The subsistence was more than twice that,” Wayne said. “We think but we don’t know. We’re talking about a really significant impact on the shrimp here.”

On Friday, the board drafted proposed restrictions for subsistence shrimping in Hoonah Sound. The first draft of the proposal allowed for 5 gallons of spot shrimp per household per day, but the language was amended to 10 gallons per day after subsistence users voiced concern. Board of Fisheries member Fritz Johnson cautioned others to consider that traditional subsistence users often share their harvest with others, and catch limits could hamper that process.

“To handicap the subsistence users harvest it seems to me is antithetical to what subsistence is all about,” Johnson said. “So as we head down this road here, I think we need to be aware of that.”

The Alaska State Board of Fisheries is meeting at Sitka’s Harrigan Centennial Hall through January 23. All sessions are open to the public.