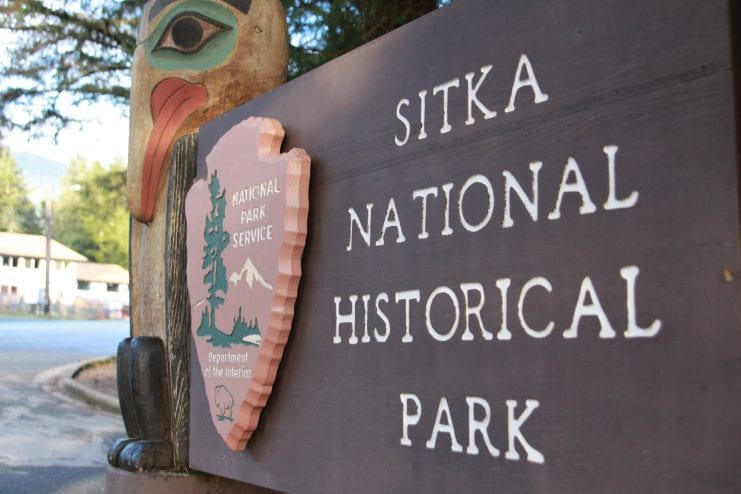 Sitka National Historical Park is home to the Tlingit fort site Shis’gi Noow and battleground, where the Kiks.adi Tlingit clashed with the Russian American Company in 1804. (Photo/KCAW/Katherine Rose)

Some programs at Sitka National Historical Park may be under tribal management, as early as this summer.

The National Park Service and Sitka Tribe of Alaska (STA) have confirmed they are in ongoing negotiations to collaborate on some services in the park in 2018. Although neither park officials nor Tribal representatives have spelled out the details of the collaboration, it may involve historical interpretation. The park is home to the Tlingit fort site Shís’gi Noow and battleground, where the Kiks.adi Tlingit clashed with the Russian American Company in 1804.

At the STA Tribal Council meeting on Wednesday (01-17-18), the council voted to authorize the Tribal Chair KathyHope Erikson to sign the 2018 funding agreement.

The Indian Self-Determination and Education Assistance Act Amendments of 1994 allows tribal involvement in the management of federal lands. If a tribe has a special historic or cultural relationship with a national park, they can pursue an Annual Funding Agreement (AFA) to provide projects and programs in that park. In 2016, the National Congress of American Indians released a resolution declaring that many national parks fit the bill.

Sitka National Historical Park was on that list, along with Glacier Bay National Park, Denali National Park and Preserve, and many other large national parks across the lower-48.

Conversation between STA and the park service began in 2016, when STA communicated its interest in a funding agreement. They submitted a formal request for negotiations in April of 2017, and have since been meeting regularly to further that process.

A date for signature has not been announced.