No tsunami after warnings wake Sitkans Sitkans joined residents across coastal Alaska in an early-morning evacuation, following a large earthquake deep under the Gulf of Alaska. The Alaska & West Coast Tsunami Warning Center recorded the magnitude 7.9 quake at 12:31 a.m., centered about 175 miles southeast of Kodiak. Many in Southcentral Alaska and the Anchorage area felt strong tremors.

In Sitka, that was not the case. Many here were alerted by cell phone, long before the community ’s sirens were activated. The digital advisory had no detail, other than that residents of coastal areas should evacuate to high ground immediately.

Sitka schools superintendent Mary Wegner opened both Keet Gooshi Heen Elementary and Sitka High School to evacuees around 1 a.m., about the same time that the firehall touched off the sirens.

By 2 a.m., the tsunami’s scheduled arrival in Sitka, the high school was crowded with residents hoping to remain high and dry.

Mackenzie Bovard awoke to the text message alert beside her husband, who is in the Coast Guard. She wondered if the text was another false alarm, like the missile alert in Hawaii two weeks ago.

I didn’t feel very panicked. I was just kind of laying there with my husband when he was awake, telling me to get him, like, “Really, do we have to get up? Can’t I just go back to sleep?”

But the Bovard family did rouse, along with hundreds of others. Fourth grader Delilah Hinchman was posted up in the hallway, directly across from her classroom. Beside her was her sister Valerie.

Delilah: This has been going on for two and a half hours.
KCAW: I know! How are you feeling?
Valorie: Tired.
KCAW: Tired?
Delilah: Yeah. But at least we get to go to school early! 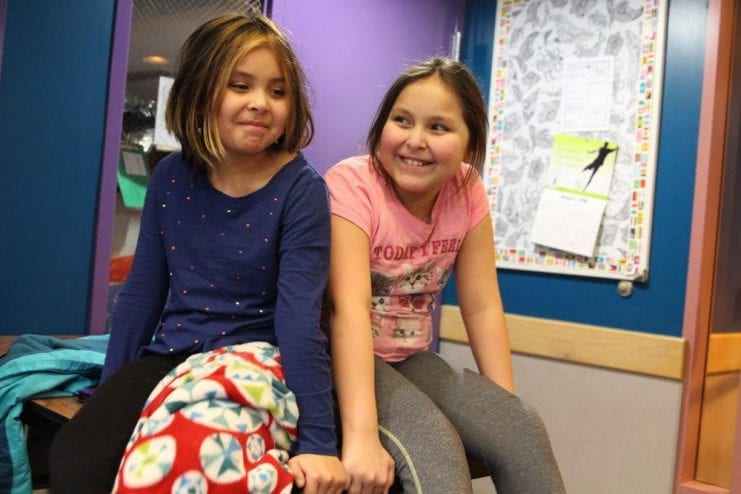 Valerie and Delilah Hinchman wait for the all clear, signaling they can return to their homes. (Photo/KCAW/Emily Kwong)

The City of Sitka gave the all clear shortly after 3 a.m., meaning residents could return to their homes. School is expected to take place today in Sitka at the usual times.

The tsunami did not produce significant tidal fluctuation in Sitka — .4 feet according to the National Tsunami Warning Center. In Kodiak, it generated a slightly larger wave of only .6 feet. Nevertheless, authorities kept the warning in effect until 3:12 a.m., when it was downgraded to an advisory for coastal waters only between Chignick Bay in the Aleutians and Seward.

The last time Sitkans evacuated was on Friday, January 3, 2013, when a magnitude 7.5 earthquake struck offshore on the Queen Charlotte fault just before midnight. The tsunami arrival time then was much shorter, and the evacuation somewhat more intense. But at least it was a Friday night and — unlike this latest event — many did not have to roll out of bed for work the next day.