Chinook action plan a ‘question mark’ for conservation and economics 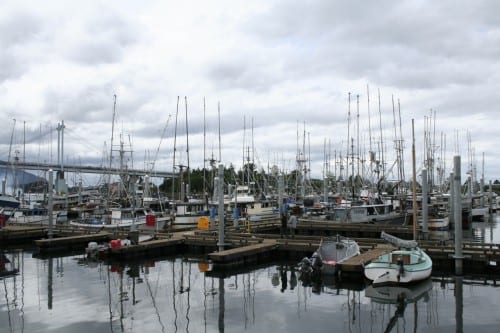 Sitka’s ANB Harbor will remain full for more of the year, as fishing for kings will be scaled back this season, especially in the late winter and spring. But the Board of Fish “action plan” for chinook (RC422) has one upside: Summer trolling will open as usual on July 1, with a second opener likely in August. (KCAW file photo)

There will be a lot less fishing for king salmon in Southeast in the coming season, after the Alaska Board of Fisheries took dramatic steps to protect dwindling chinook returns to the region’s major river systems.

Before wrapping up its 13-day meeting in Sitka on Tuesday (1-23-18) the Board of Fish passed an “action plan” intended to reverse the downward spiral in Alaska’s wild king salmon. The plan targets 3 primary rivers — or stocks of concern — but leaves the door open for similar conservation measures elsewhere, should they become necessary.

Note: Some of the area and time restrictions on fishing — especially on inside waters — also affect sport and subsistence harvesters of king salmon. We’ll post links to reporting on those issues as the stories become available.

The big hit for commercial trollers is ending the winter season a full six weeks early, on March 15. It’s hard to state the economic impact on trollers — each one a small, often family-owned business — on losing a prime opportunity to harvest a bedrock species that is currently earning them close to $13 a pound.

But we’ll come back to that.

The “action plan” adopted by the Board of Fish — known formally as RC422 — includes language that the steep conservation measures spelled out for the coming year for the Chilkat, Unuk, and King Salmon rivers — where king salmon stocks have fallen precipitously — should also apply to the Taku, Stikine, and Situk rivers which are not yet considered “stocks of concern.”

Just the opening paragraph of the action plan — the preamble — touched off a flurry of accusations that the Department of Fish & Game was going too far.

Board member Robert Ruffner initially thought the preamble was a bad idea, but became convinced that the Taku, Stikine, and Situk were not headed in the right direction.

“We could have an action plan here today that said none of you get to go fishing at all — for anything — and we’re still not going to meet escapement goals.”

The Board also took some heat for including some language in the preamble about the Pacific Salmon Treaty, which many fishermen consider an unrelated issue to the current conservation crisis. The Pacific Salmon Treaty deals with chinook moving across the international boundary, say, a king that was hatched in a river in British Columbia, but is caught in Alaskan waters. It’s a really complicated agreement — but that’s precisely why Deputy Commissioner of Fish & Game Charlie Swanton thought it was important to incorporate it into the action plan.

“34 chinook salmon stocks in Southeast Alaska, a handful that are recognized as part of the treaty, and several that are in stock of concern status. We’re going to do the job that we’ve got to do relative to balancing all of those things and see if we can’t meet our escapement objectives and pull ourselves out of this.”

So the action plan is really a manual for the state to implement significant fishing restrictions on the stocks of concern, and to take whatever other steps may be necessary — by emergency order — to pump the brakes on catching kings headed for other rivers.

“I think staying in business is still a question mark,” said Jeff Farvour.

Jeff Farvour began his career as a deckhand in Sitka. He’s worked his way up through a wooden troller to a larger fiberglass boat which picked up on the very day last season when Fish & Game announced that there would be no second king opener in the summer.

The action plan will be a bitter pill.

“I’m confident it will help us avoid the Southeast wild stocks we’re trying to avoid. I think it’s a good plan in that respect. But as far as the financial end of it, it’s yet to be seen. We’re a year-round king salmon fishery, with some coho opportunity and a chum fishery in the summer. But it’s really that king salmon that makes it happen for Southeast.”

Farvour and his fellow trollers want the king salmon fishery to recover, but it’s going to take a while. Salmon trolling remains one of Alaska’s few limited-entry fisheries where young people can buy in on savings, rather than taking out huge loans — and Farvour’s concerned about them.

Troller Tad Fujioka also sees an economic problem in the action plan: Losing six weeks of winter trolling means a loss of 20-30 percent of their income for some fishermen, but residents of coastal waters — like Sitka — can still pull together decent season fishing out on the ocean on tolerable winter days, and during the brief summer opener.

Elsewhere, it’s going to be difficult make it, especially when the action plan closes down fishing completely in the places like the Upper Lynn, Behm, and Seymour canals, and will likely place significant restrictions on much of Chatham Strait, Icy Strait, and Frederick Sound.

Fujioka feels trollers who fish inside waters are bearing a disproportionate share of the conservation burden.

“I’m particularly concerned about the effect this is going to have on the smaller communities, Kake, Angoon, Hoonah. Small boats in the small communities are particularly dependent on the spring and late-winter fisheries.”

But Fujioka, like Farvour, recognizes that it’s critical to allow as many wild kings to return to Southeast’s rivers as possible.

“It’s unfortunate that the biology of the stocks made it such that it had to be this way.”

Note 1-30-18: This story was amended to reflect Tad Fujioka’s concerns over the six-week closure of winter trolling — not spring trolling, as originally reported. Also, he believes the potential closures in Chatham and Icy straits, and Frederick Sound, are more economically harmful to Kake, Angoon, and Hoonah, rather than closures in Seymour and North Behm canals where “little if any trolling has occurred… since the 1970s.”