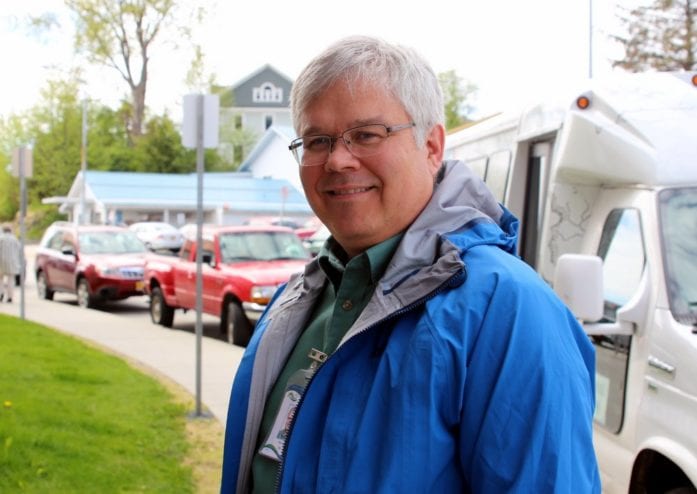 Rob Allen was appointed to the CEO’s job in January 2015. He was scheduled to stay only until April of that year. (KCAW photo/Robert Woolsey)

Rob Allen will continue as the CEO of Sitka Community Hospital through mid-October, but the vote to extend his contract last week was close.

After a lengthy closed-door meeting last Thursday (1-25-18), the Sitka Community Hospital Board voted 3-2 to retain Allen, with the “no” votes coming from board members who had been appointed by the assembly just two days before.

Allen has been at the reins of Sitka’s local hospital through some difficult decisions, including the closure of the obstetrics program. But he’s also the person who pulled the city-owned organization out of a financial tailspin when he stepped into the interim CEO role almost exactly three years ago.

Allen has gained some detractors during his tenure — some of whom testified during the public part of the meeting — but according to hospital board president Connie Sipe, the hospital’s financial analysts are not among them.

“We also had an audit presentation from the auditor, who works for the board. And he’s a specialist in hospital health care audits and he said it was a fine audit, in terms of everything is fine, and he’s been auditing this hospital for years and he talked in great detail about how much better the financial situation of the hospital is than it was three and four years ago, before Mr. Allen came.”

So what about the no votes from Carolyn Evans and Carin Adickes, who were appointed by the assembly two days before the vote on Allen’s contract extension?

“I would not try to impugn any motives to the new board members. They clearly care greatly about the hospital,” said Sipe.

Rob Allen also doesn’t impugn the motives of Evans and Adickes, but he wishes that he had their full confidence from the beginning.

“I guess I’m disappointed that it was two new board members who have only had the board packet for a couple of days, and really don’t know what’s going on at the hospital in any great detail.”

But motives were at the forefront of the assembly deliberation around the appointment Evans and Adickes — not necessarily their motives, but those of Richard Wein, a former surgeon at the hospital who was dismissed last year by Allen in a personnel dispute, and who since won a seat on the assembly.

Some members questioned whether Wein was trying to engineer the removal of Allen, but ultimately they allowed Wein to vote on the board appointments. 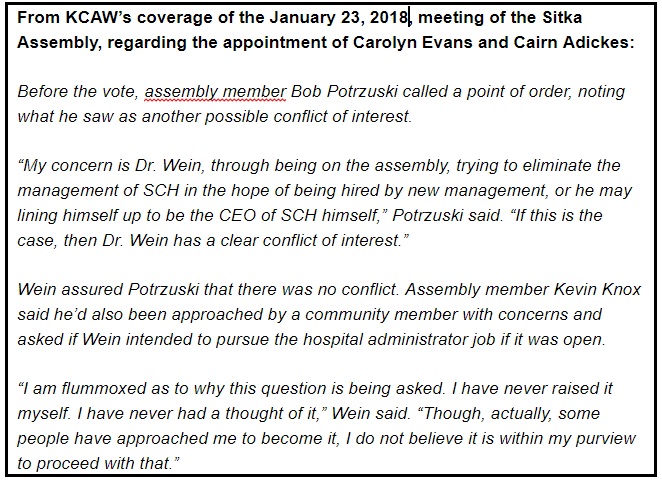 Now, with a 6-month extension and a lot to accomplish, Allen hopes to persuade the new board to work together.

“I would ask that they have an open mind to look at it and evaluate how things are going, and see that there are a lot of people up here working for the good of the hospital.”

And it’s a busy time. The hospital is implementing a new Electronic Health Records system, among other things. An initial effort by the board last year to recruit an outside management team for the hospital came up with no takers — although there was interest in collaboration. The assembly is pursuing a full spectrum of possibilities — from oversight to outright sale of the hospital — in a request for proposals issued at the same January 23 meeting.

Connie Sipe says that for the three board members with longer tenure, extending Allen’s contract was the best move for the hospital.

“I think the three of us were really solid about the fact that this is the most stable for the time being, because there are a lot of possible changes coming. There are a lot of big projects starting, like the electronic health records. There are our own efforts, Project Urgent Care to increase the bottom line. We’re starting a new pharmacy program that will benefit the hospital but local pharmacies. So we’re in the middle of quite a few things, and with the RFP from the assembly hitting the street soon, we think that this is the better-known stability.”

Sipe says that Allen’s contract extension includes a buy-out clause, in the event the city strikes a deal for management of the hospital with an outside contractor before the end of Allen’s tenure in mid-October.

As of press time Monday (1-29-18), Allen’s compensation package had not been finalized.