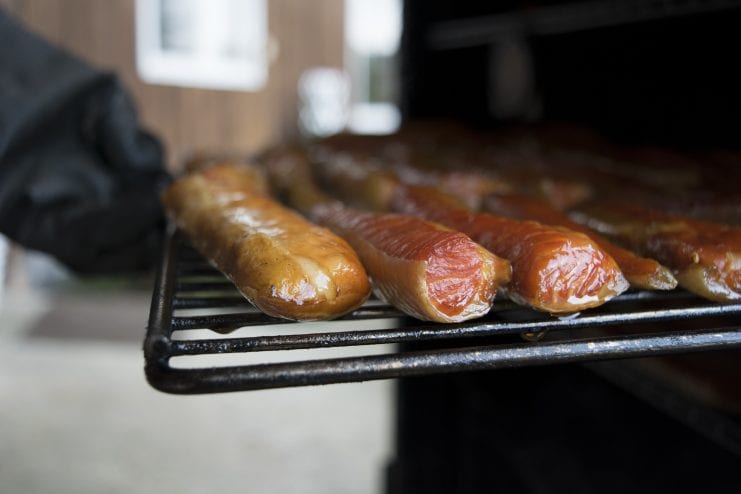 Jerry Fleming has a recipe for you. It’s a pretty simple one with just four ingredients. Alder chips, chopped from trees growing in Jerry’s backyard.

“That’s what it is is charcoal when I’m done. Hopefully it doesn’t catch fire in there,” Jerry says. “But sometimes it does. Hope I stop it quick enough.”

A big bucket full of water. Four scoops of salt.  All compliments to the main event. Something you can’t get just anywhere- king salmon bellies. But Jerry gets them delivered to his door in massive bags. And then he just gives them away.

“They’re too hard to pack for one thing. If they’re going to process them it takes too much time- they’ll never make out on it financially,” Jerry says. “I give it all away, just about. I go to the science center, I go to the fine arts camp. I don’t keep much. If I get extra I’ll can it.” 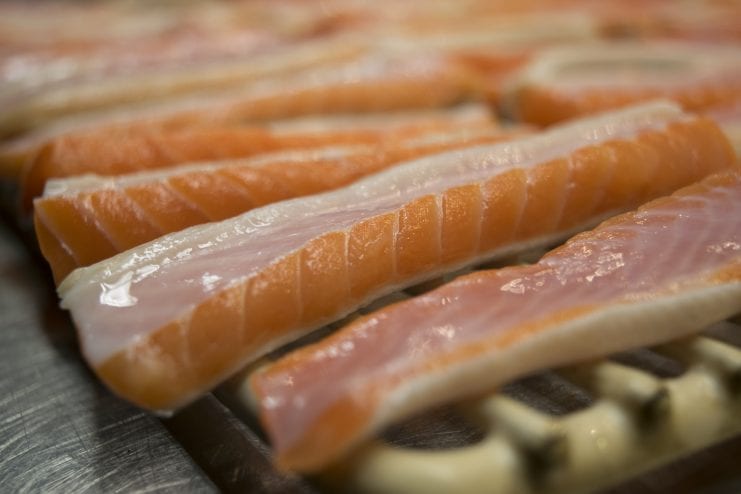 After soaking in salt water for a few minutes, these bellies will sit on the counter overnight before smoking. (Photo/Katherine Rose/KCAW)

He’s rigged an entire wall of his garage with a metal seafood processing table he salvaged from a local plant.

“It was down in front of Sitka Sound Seafoods,” he tells me. “It was down there laying on the ground and somebody had run over it and dented it. And they gave it to me.”

Soon, dozens and dozens of pink bellies will line this silver counter. But first he has to cut and glaze them. He sharpens his knife quickly. “Bet you can’t do this,” he says as he shows off his skills.

He slices the bellies into small pieces, puts them in the bucket full of salt water and sets the timer. While he waits, he has a couple of visitors looking for a snack.

“Tinkerbell! How are you! See if I can find some goodies for you here. There tinker, there you go,” Jerry says as he hands some scraps to the tiny Papillon, Tinkerbell. “Yes,” he says to his fluffy black dog, Neva, “I’ll give you some too.” 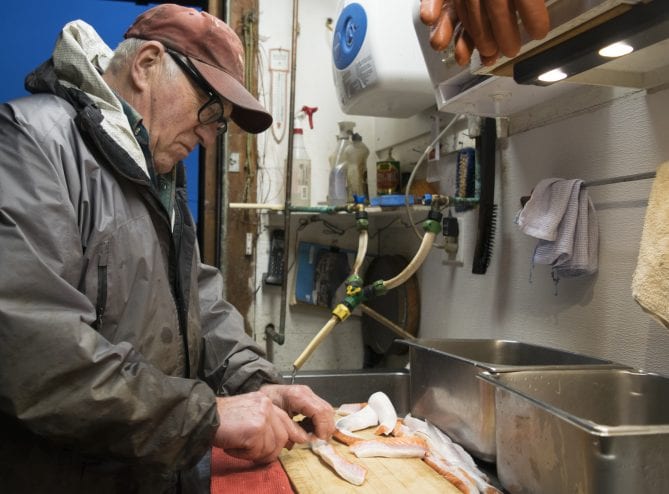 But with the smells of delicious salmon wafting through the garage, it’s hard to keep the pups out from under your feet.

“I got my hot water tank, I got my table here,” Jerry says, and he’s interrupted by a loud yelp from Tinkerbell. “Oh! Excuse me! Excuse me! Yeah, I stepped on ya’ didn’t I? But you get right underneath me!”

Now the bellies come out, they’re rinsed off and then sealed.  They’ll sit here overnight. Jerry sets up a fan at one end of the counter to dry the glaze.

Tomorrow he’ll be up at the crack of dawn to get them in the an old, blackened smoker. To say it’s seasoned is an understatement.

“I hope I have it all in the smoker by 5:30 or 6:00. I hope. If I don’t make it, I don’t make it, that’s also okay. Everybody is different. I’ve had some that aren’t good, but they all turn out basically pretty good. Just gives me something to do. You gotta be busy. I enjoy doing it, and they enjoy it, so why not?” 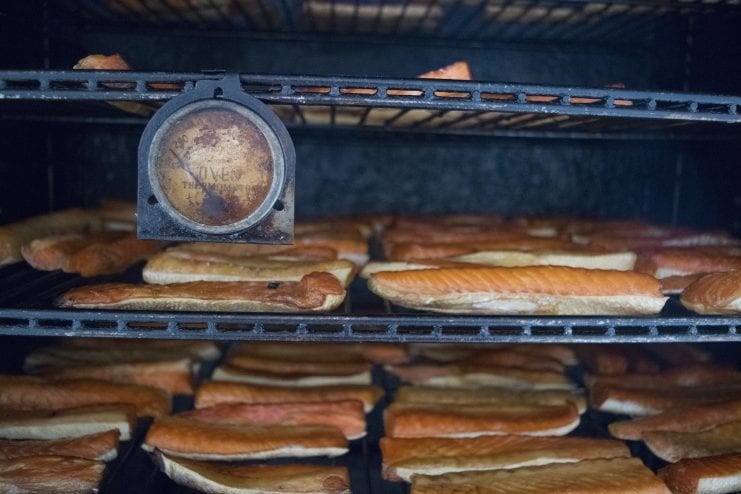 The final product, before it’s pulled out of the smoker. (Photo/Katherine Rose/KCAW)