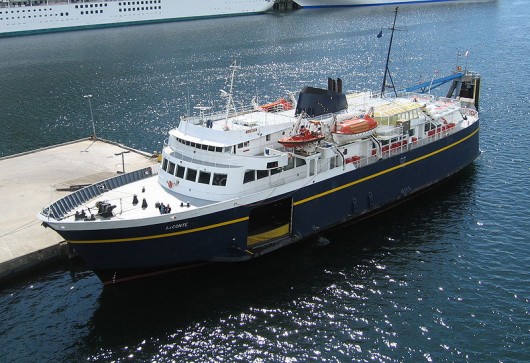 The ferry LeConte docks in Skagway. After high winds in Lynn Canal this week forced the LeConte to cancel its northbound run, its southbound run ended prematurely when one of its three steering systems failed. (J Webber/Creative Commons)

The state ferry LeConte has been repaired, but will not be sailing today. The Juneau-Haines-Skagway-Haines-Juneau route has been canceled due to storm winds of 50+ knots, high seas, and freezing spray. Weather permitting, the LeConte will be running as scheduled on February 3, 2018.

AMHS staff is contacting affected passengers and rebooking travel. Service notices may be found here or by contacting your local terminal by dialing 907-465-3941 or toll-free at 1-800-642-0066.

The state ferry LeConte has been sidelined again, but this time it’s not Mother Nature’s fault.

Sailings to Sitka and Angoon on January 31 and February 1 have been cancelled due to mechanical problems.

Aurah Landau, a spokesperson for the Department of Transportation, says the LeConte returned to Juneau from Hoonah after the crew discovered a failure in the starboard steering system.

Although the ship has redundant systems, Landau says this problem can’t wait for repair.

The Marine Highway System is connecting with passengers scheduled to sail on the LeConte and rebooking them on other ships. But some people could be inconvenienced for several days since the ferry system is stretched thin at the moment. The Columbia is just completing two weeks of repair in Bellingham, Washington. The Malaspina is also undergoing repairs, and the Taku is mothballed awaiting the arrival of its new owners.

Landau is not sure when the LeConte will be back in service. If another boat experiences problems, there’s not really a plan B, thanks to funding cuts.

“The Marine Highway has experienced $29 million in total budget cuts since 2013. Two boats have been fully removed from the fleet in that time period, and like I said two older mainline ferries are currently out of service. All of these factors combine to mean that the Marine Highway doesn’t have extra ships to cover weather and mechanical challenges right now.”

The keels were laid for two new Alaska-class ferries in Ketchikan in 2014. Both are scheduled for delivery later this fall, and should become operational by the spring of 2019. The ferries Tazlina and the Hubbard can each carry up to 300 passengers and 53 vehicles, and will operate in daytime hours only.

Prior to its mechanical troubles, the LeConte this week missed its scheduled sailings into Lynn Canal due to high winds.