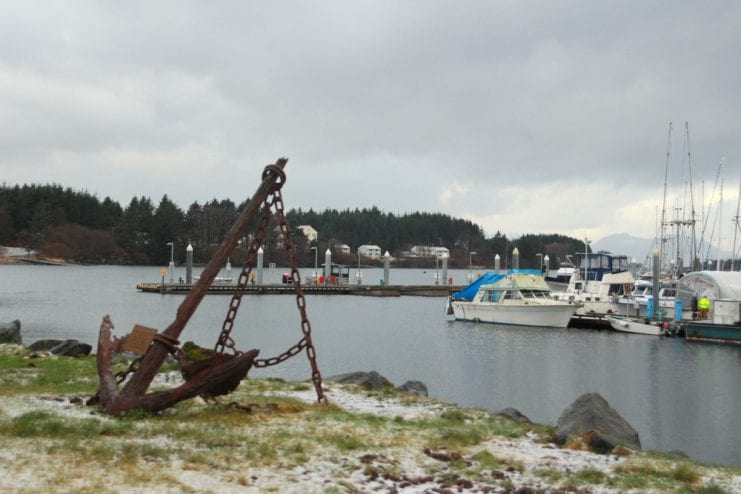 One of the suction lines at the pump station, which is located in Thomsen Harbor, broke early this morning (02-02-18). The City of Sitka has diverted all wastewater into the harbor until the pump station is repaired. (Emily Kwong/KCAW photo)

The City of Sitka has restored sewer connection at the Thomsen Harbor Lift Station, allowing wastewater to resume direct transfer to the Wastewater Treatment Plant on Japonski Island.

Sitka’s raw sewage is no longer discharging into the harbor. Citizens may resume normal water use.

Community Affairs Director Maegan Bosak said crews were able to temporarily restore two of the three pumps at the Lift Station today. “There is still a lot more work to do, but our first priority was to do what needed to be done in order to protect public health and the environment,” said Bosak.

The repair was made a day earlier than expected and involved several city crews. In a press release today, Environmental Superintendent Shiloh Williams thanked the Sitka Electric, Boreal Controls of Juneau, and “the dedicated City and Borough of Sitka crew for their tireless efforts.” Williams also thanked the community for limiting water usage during the emergency.

The facility that pumps Sitka’s raw sewage away from town is currently down. As repairs are made, the City is urging all residents to limit their shower use, toilet flushes, and time at the tap until further notice.

Around 4:45 a.m. this morning (02-02-18), the Thomsen Harbor Lift Station failed. The lift station is what pumps all wastewater from households and businesses off Baranof Island to the treatment plant on Japonski Island.

Community Affairs Director Maegan Bosak said a suction lines on one of the three pumps broke loose, causing sewage to flood the dry well at the pump station and saturate the electrical equipment. Built in the 1980s, Thomsen Harbor Lift Station is one of many pieces of municipal infrastructure with deferred maintenance issues.

Crews from several departments, including Wastewater, Water, and Public Work, have been working around the clock to clean the pump station and restore the lift station to full operation. The earliest the system would up and running is Sunday, February 4th.

To prevent raw sewage from backing up into homes and businesses, Sitka’s wastewater is currently being diverted into the harbor through a storm drain.

Given the environmental concern this poses, Bosak is appealing to citizens to help. “We’re really hoping citizens can help us and limit their showers and flushing. The Alaska Department of Environmental Conservation and other environmental agencies have been alerted and are monitoring the situation. Crews are working as quickly as possible,” Bosak said.