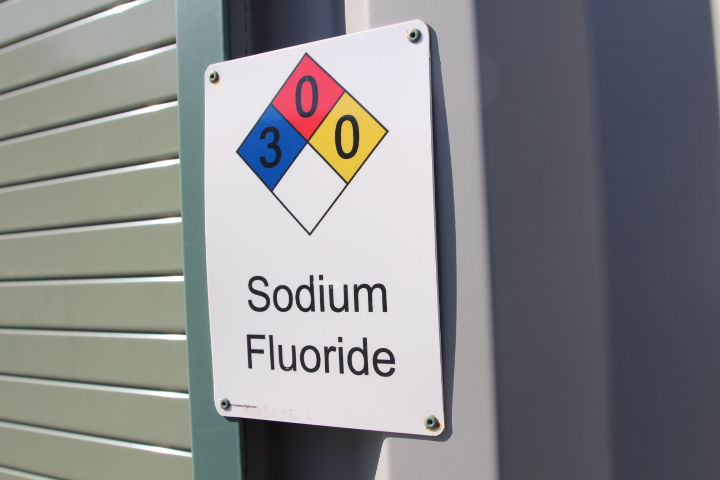 Both chlorine and fluoride are added to the water after UV treatment. (KCAW photo/Robert Woolsey)

Fluoride will continue to be a part of Sitka’s municipal drinking water. The Assembly discussed the issue for nearly two hours Tuesday night (02-13-18) and heard from nearly two dozen citizens on both sides of the issue.

“I’m a person who was born before fluoridation started and I have a mouthful of cavities to show it. My kids who grew up here in Sitka, where there’s always been fluoridated water since I moved here have had no cavities since they grew up.

Sitka has been adding sodium fluoride to the community water supply since the 1950s to reduce tooth decay. Shipped from China, the city adds about .6 milligrams per liter to municipal water through a state-regulated process. The Assembly has publicly debated the issue, most recently during the 2014 elections.

Several citizens, including medical providers and public health educators, urged the Assembly to continue that practice. Dr. Ross Marley said that if fluoride was removed, the lowest income Sitkans would see the biggest uptick in cavities.

“80% of dental decay exists in the lower economic strata – 20% of the population.  By keeping fluoride in, there’s a disproportionate benefit that goes out to the poorest people in our community,” Marley told the Assembly.

While few on the Assembly disputed the value of fluoridation, Assembly members Richard Wein, Aaron Bean, and Steven Eisenbeisz thought the question should be put on the ballot and officially settled by voters.

Those in favor of that idea, such as Tamra Kyle, said they wanted a right to choose which chemicals their body was ingesting. “They do Vitamin D in milk to prevent Rickets, but the difference is people have a choice whether or not they want to drink the milk. And I personally don’t drink milk,” Kyle said.

In the end, the Assembly voted against both a ballot question and removing fluoride from municipal drinking water. They also tabled an ordinance to create a utility cost subsidization program until their March 27th meeting. The Assembly approved $400,000 for such a program during the budget process last year.

Since the Assembly did not get through their entire agenda  last night, the meeting will continue at 6 p.m. tonight at Harrigan Centennial Hall.

During that time, they will consider a $100,000 appropriation to retain two consultants to oversee the RFP process for Sitka Community Hospital. They will also make several adjustments to the budget to reflect expenditures. That includes $12,000 spent by Clerk Department to implement a new system for digitizing city records.