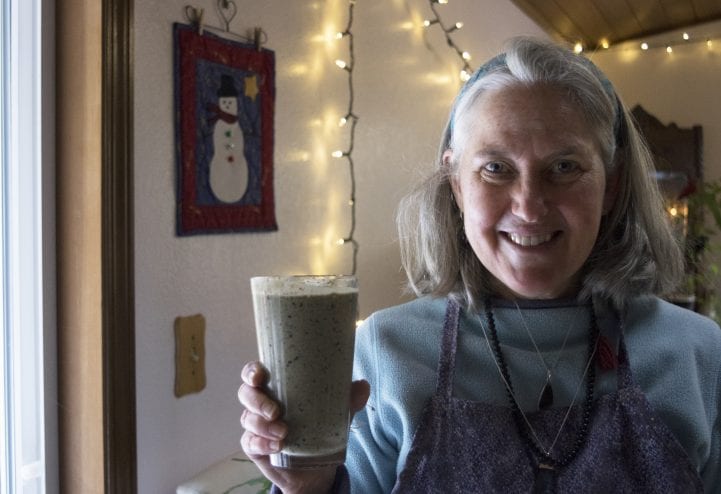 Lisa Sadleir-Hart makes her smoothies from berries and other fruit, kale and homemade yogurt. (Photo/KCAW/Katherine Rose)

On the morning I meet with Lisa Sadleir-Hart to make homemade yogurt, I’m a little frazzled. It’s early, I’m not sure if this is the right house, what sound does yogurt make, anyway? I take my shoes off and walk into her quiet, dimly lit home, sunlight pouring in from the kitchen windows. And I’m forced to relax. Because Lisa isn’t just making yogurt. She’s doing yoga.

Lisa says yogurt is her  power food. She eats a lot of it, mostly in breakfast smoothies. But she realized that buying so much yogurt had its drawbacks.

“I have a love of nature and creation. And I realized that all of those yogurt containers that I was buying. I can only use so many of them to put things into the freezer. And I was like, this is craziness. I can’t do this in good conscience anymore.”

So now, once a week, Lisa makes her own yogurt by hand.

“First thing I’m gonna do is take my non-fat dried milk. As you can see I’m not an exact measurer, so i’m going to take some robust ⅓ cup scoops and scoop them into my pan.”

Lisa says this gives her more calcium and curbs cost. She adds six cups of water to the powdered milk and turns up the heat on the stove. She has a special yogurt thermometer.

“I’m gonna heat to 180, but I’ll cool it down to this green safe zone where I know the bacteria will be able to grow the best. Cuz if it’s too hot, I’ll kill all the bacteria in the culture and that’s not what I want to do. I want loads of those good bacteria in my yogurt to feed my gut.”

While it’s cooking, Lisa stirs slowly. This processes takes about 7 minutes. It’s quiet, so Lisa takes this time to do a morning meditation. She slowly stirs the yogurt as she chants, “Hari om, Hari om, Hari om,” and her voice reverberates through her kitchen.

After it’s frothy at 180 degrees, Lisa cools the mix while stirring in a bath of water in the sink. Once it hits the right temperature, she pours the milky mixture into a yogurt maker to solidify.

She whisks in a spoonful of yogurt starter and some of last week’s yogurt. The cultures meld together to make something new. 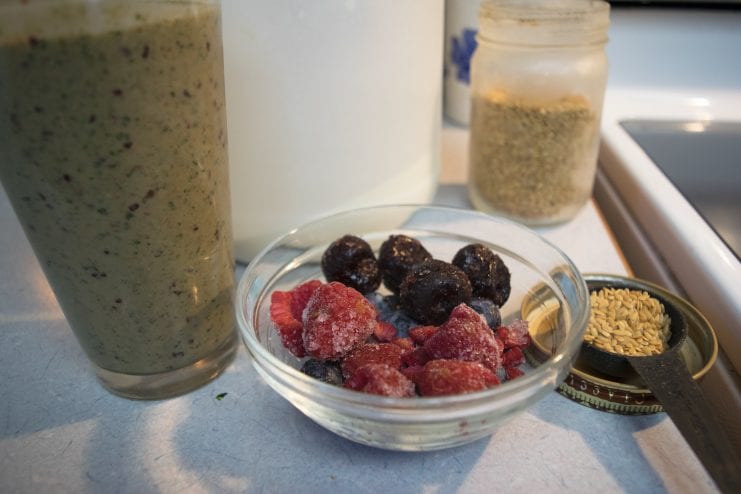 The mix will sit in her yogurt maker all day. Then with the small bowl of thick white yogurt left over from last week’s batch, she makes her daily morning smoothie.

“I try to get a good two cups of greens in there. It’s a great way to get more green vegetables into your diet.”

But she also adds berries, a banana, ground flaxseeds, and today – a California persimmon.

Yoga is all about paying attention. To your breath, to your posture. And for Lisa, that discipline- that mindfulness- carries over to her palate.

“When I pay attention to what I’m eating there are a couple of things that happen. I become incredibly grateful. And you also taste food so much better. You can taste the kale. You can detect that hint of orange essence. From the persimmon to the raspberry to the black cherries. It puts me in connection with- where did those foods come from? Whose hands touched the food. Who were the farm workers who harvested the food so I could benefit?”

Benefit from the sustenance, and the thoughtful routine it provides.

“I’ve been doing this for at least 7 to 10 years. And I never get tired of making yogurt.”