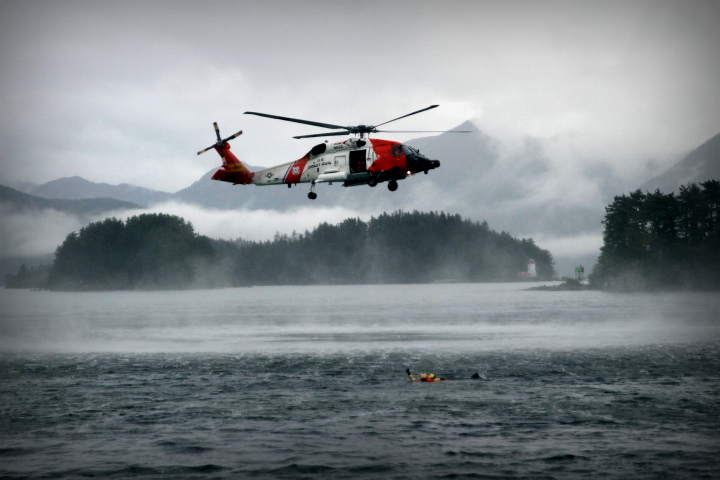 Although most people imagine the crews of Coast Guard Air Station Sitka routinely plucking mariners from sinking ships, the most common mission is the non-maritime medevac in flight conditions too treacherous for any other aircraft than the all-weather Jayhawk. Air Station Sitka also performs more terrestrial Search and Rescues (lost hunters and hikers) than any other unit in the Coast Guard. (Emily Russell/KCAW)

Somewhere over Southeast Alaska, just about every day of the year, one of three Coast Guard helicopters is on patrol or training.

The H-60 Jayhawk is built to fly in bad weather, because that’s when most people need the assistance of the Coast Guard.

Air Station Sitka commander Captain Chip Lewin recently discussed (2-14-18) the capabilities of his crews and their equipment in a presentation to the Sitka Chamber of Commerce.

58-percent of Air Station Sitka’s flight hours are spent practicing: search patterns, approaches, and other routine stuff. And some of their practice is far from routine.

“We do a lot of vertical surface, which means cliff operations, which is a specific maneuver and qualification in the Coast Guard to be able to take a rescue swimmer and hang him down and lean him against a cliff. And he’ll traverse a cliff and then hook on to someone who is stranded. We do a fair amount of those here, so we train pretty hard for that.”

Cliff-traversing is probably something they don’t talk about until after someone’s already signed up for Rescue Swimmer School. But Air Station Sitka commander Chip Lewin has work for crew expecting to get wet.

“We also do high seas hoisting, where we’ll go out off of Kruzof in certain sea conditions, and go into limits that most air stations don’t go into, and put our rescue swimmers down into heavy seas and practice that.”

Air Station Sitka has 7 rescue swimmers on duty, 19 flight mechanics, and 16 pilots supported by 130 additional personnel — all of whom Lewin described as critical to the mission. From the people who maintain the station’s aging housing, to the technicians who keep the three state-of-the-art helicopters in the air.

The air station’s Area of Responsibility runs from Dixon Entrance in the south, north to Icy Bay near Yakutat. In all, about 12,000 miles of rugged, remote coastline that is notoriously wet, windy, fog-bound, and frozen.

Lewin told the chamber that Air Station Sitka does not take rookies.

“We don’t have any first-tour aviators up here. So this is all second-tour aviators. We are selective on who can come up here. And you come up here as an experienced aviator and you’ve got to spend another 6-8 months becoming an Alaska aviator. And even if you’re a senior person you’re spending 6 months flying with a guy or gal who’s already been here a year at least. We have them winter over. That’s because of area knowledge, the flight regime, and the weather. And Kodiak has the same requirements we do.” 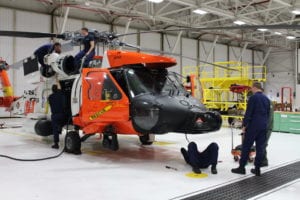 In addition to flight crews, it takes another 130 personnel to support the operation of the three Jayhawks — from aviation techs to maintenance workers in housing. (Emily Russell/KCAW)

The air station’s mission is mostly non-maritime medevac, transporting roughly 80 people a year experiencing medical emergencies to hospitals in Ketchikan, Sitka, and Juneau. That’s a little different from other air stations which might have more emphasis on law enforcement or fisheries. But in region where many people live in communities without airports, and where it’s often dark and stormy, the Coast Guard, as Lewin says, is “the only game in town.”

For other work, the air station can be more picky about the weather. While the big cutters tend all the floating buoys, the Aids to Navigation Team — or ANT — looks after everything on land. Lewin says this is a major mission.

“So we are taking the ANT out to probably 70 aids a year. An aid in Alaska is a stick on a rock with a bunch of lights and batteries. And we hoist them down to that. It’s one of the neatest jobs for those folks. It’s also very unusual how much we do.”

The three H-60 Jayhawk helicopters are essentially “marinized” versions of the Blackhawk helicopter in wide use in the four other military services. But instead of armament, the Jayhawk carries extra fuel — a lot of it. 6,000 pounds of fuel that can keep it aloft for five-and-a-half hours, and give it more range than any other helicopter in its class in the US military.

And the Jayhawks are better looking. “Our are shiny,” Lewin says, “And theirs are dull and gray.”