Commentary: Plastic bags a threat to the health of oceans, humans

Opinions expressed in commentary on KCAW are those of the author, and are not necessarily shared by the station’s board, staff, or volunteers. 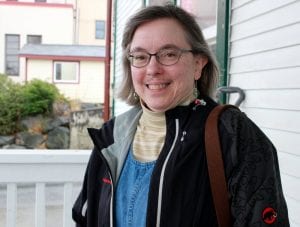 As a coastal community, we depend on the ocean. The salmon that leave our streams and lakes go out into the ocean and either filter feed for plankton and copepods, or feed on smaller fish that feed on the zooplankton. Then we catch them and either sell them for others to eat or we eat them ourselves.

There is a problem, though, that we are understanding more and more. That problem is plastics and microplastics. The thing about plastic is that it never really decomposes like paper or glass. It just gets smaller and smaller and then it floats around in the water like plankton. We ingest microscopic pieces of plastic through our food and even our water. This would be fine if it went right through us, but the issue is that some of the chemicals in plastic act like the hormones in our bodies. Studies have linked these chemicals to adverse effects such as lower fertility rates, developmental abnormalities in children, asthma, and even some types of cancer. A recent study based in the Gulf of Alaska by the University of Alaska Anchorage found that the chemicals in plastics can interfere with salmon immune cells making them more susceptible to infections. Additionally, it has been found that viruses and bacteria will readily attach to microplastics increasing the likelihood of disease transmission in humans and wildlife.

We need to limit to the amount of plastic that we use because it is having consequences for our health and for the health of the ocean environment. One step towards reducing the amount of plastic we use is either banning plastic bags at the grocery stores or having a fee that is charged for each plastic bag that is used. Already, cities and villages across Alaska, the USA, and the world are banning or in the process of banning single-use plastics. Countries like France, Germany, India, China, Morocco, Rwanda, and Kenya have plastic bans in place. It’s actually illegal to sell them or bring them into the country of Kenya and can incur a $40,000 fine!

When bans or fees are enacted they work. For example, South Africa and Ireland both saw a 90% drop in plastic bag use after the ban, and plastic bag litter in coastal cleanups in California fell by 72% the year after their plastic bag ban went into effect.

The Sitka Assembly is considering options for reducing plastic bag use at its assembly meeting on February 27 (6 p.m. at Harrigan Centennial Hall). This is a perfect opportunity to express their views on the issue.