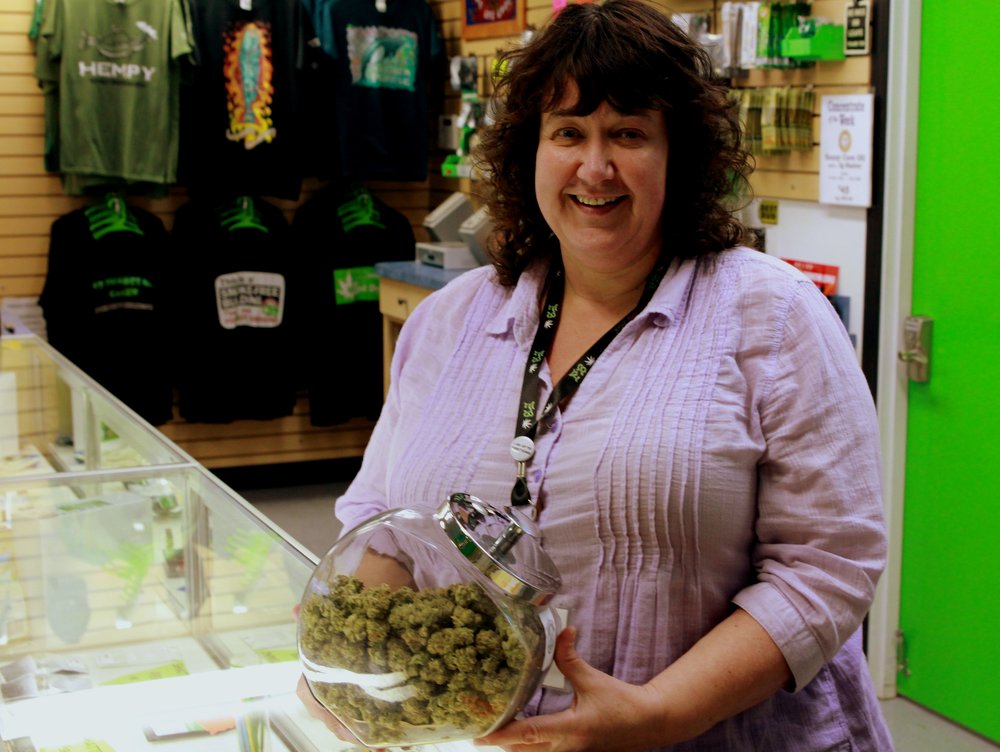 Weed Dudes owner Michelle Cleaver discussed her business’s growth in front of the Sitka Chamber of Commerce. “It’s hard to talk to a room full of people who may be with you on your dream, or against you. But I’d like to think that I’m educating the world,” Cleaver said. She hopes cannabis will be downgraded from a Schedule I drug to at least a II, which would lower some of the barriers in research on marijuana, and would eliminate some of the challenges retailers face in transportation and finance. (KCAW photo/Robert Woolsey)

Sitka’s budding marijuana business is poised for significant growth, despite major limitations in transportation and finance faced by the industry.

Because of a conflict with federal law, the producers of Alaska’s legal marijuana can’t deposit their sales in banks, which makes otherwise routine tasks like paying bills a challenge. Nevertheless, one of Sitka’s pioneering cannabis retailers told the Sitka Chamber of Commerce this week (2-21-18) that statewide pot sales had already topped $57 million.

Michelle Cleaver was the first person in Sitka licensed to sell cannabis, and the seventh in Alaska, following the 2014 election which legalized marijuana in the state.

Her store, Weed Dudes, brought in nothing for the first ten months, while the state designed a regulatory structure. By 2017, everything was in place to do business, but Cleaver didn’t have much to sell.

Unlike other businesses, you can’t just call up your cannabis wholesaler and have a bale of Mexican Sativa goldstreaked to your store. Marijuana remains on the US Drug Enforcement Agency’s list of Schedule I controlled substances, along with heroin, LSD, ecstasy, and peyote. You can’t put it in the US Mail, or transport it across state borders. Just getting samples of Sitka’s local crop to Anchorage for mandatory testing required Cleaver to meet with — and win the cooperation of — the Federal Aviation Administration, the Transportation Safety Administration, the vice-president of Alaska Airlines, and law enforcement.

“I was in a room with six men in suits or uniforms talking about weed, and I was not in handcuffs!” (audience laughs)

Sitka now has three licensed cultivation facilities which have taken up the slack (and five more applicants, according to Cleaver), and two other retailers. And business is going pretty well. In the first 14 months of legal cannabis sales in Alaska the industry statewide generated over $57 million in sales, and contributed over $5 million in taxes .

Cleaver’s biggest problem remains something you just wouldn’t think would be a problem.

Cleaver operates almost exclusively in cash, because banks — which are federally-insured — are reluctant to receive money from the sale of a Schedule I drug. She thinks credit unions, which have a different insurer, will eventually come through for the cannabis industry, but until then she goes around paying her bills in cash — which means monthly trips to Seattle to pay her credit card bill, as well as a special trip to the IRS to pay her federal taxes, also in cash.

Cleaver says her retail model is not perfect, but she compensates for low prices with high volume — and variety. She’s got a range of edibles and oils in addition to the more conventional cannabis buds, and concentrates for dabbing and vaping — products which were developed in the black market, mostly by younger innovators who have an entirely different outlook on pot than the culture she grew up in.

Cleaver calls herself old school, but she’s definitely a pioneer, serving as a bridge between the estimated 60 people now employed in Sitka in the cannabis industry, and the world of conventional business represented by the chamber of commerce.

Although she worries about providing health plans for employees and other routine business matters, little else about her operation is routine.

“They ask me, Are we going to drug test? Hell yes I’m gonna drug test. I want all my employees to know what kind of drugs we’re selling. So they need to take them home, test them out and come back and tell me what they think — that’s my idea of drug testing in my store!” (laughter)

Cleaver believes that Sitka has already won a good reputation for its cannabis product, as evidenced by the number of out-of-town fishermen and other travelers who make a special effort to get to her store. “They know the weed is good in Sitka,” she says, “because we’re snobs.”

Note: This story was corrected on 2-25-18 to amend Cleaver’s remarks about the amount of sales tax her business paid in 2017. The figure she quoted — $116,000 — was the combined total sales tax for all three of Sitka’s cannabis retailers, not just Cleaver’s business.