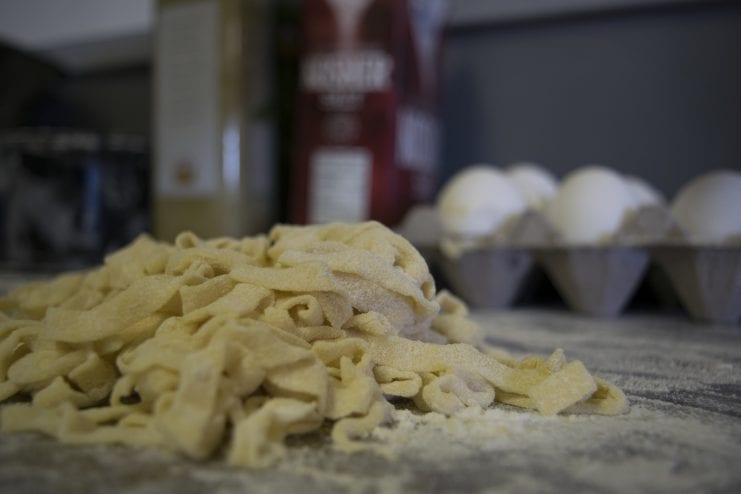 In an episode of “The Unbreakable Kimmy Schmidt,” the lead, Kimmy, takes issue with the phrase “The World Is Your Oyster.” An unsophisticated white girl from Indiana who has lived in an underground bunker for the last 10 years, “Why can’t the world be my noodles and butter?” she asks.

I hear you, Kimmy. I’d live on top of spaghetti if I could. But after spending an afternoon with chef Edith Johnson as she rolls out homemade fettuccine that melts in your mouth, I’m not sure noodles and butter will suffice anymore.

“I would have no choice,” Edith says. “Everything I’ve done has kind of circulated around Italian food, so I just developed this sixth sense for it.”

I’m standing with her in the kitchen of her cozy restaurant. Food is Edith’s livelihood, and pasta her art form. Measurements aren’t exact here- she does it by feel.

She fills the center of the well with a little olive oil, kosher salt, and two eggs. She pushes the flour toward the well, and begins to gently toss the mix together.

It’s a little too dry and mealy, so she adds a third egg. And then a fourth. She lets the dough sit for 30 minutes. Then grabs handful about the size of a baseball, flattens it, and rolls it into long thin sheets with a metal pasta roller that squeaks like a tiny wagon wheel. 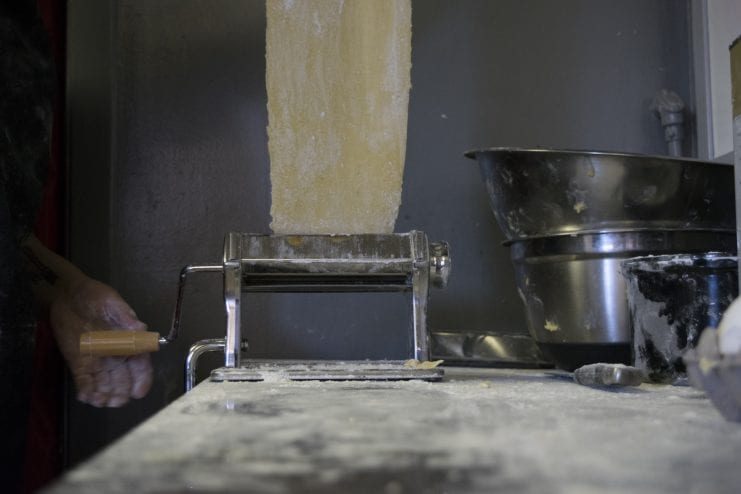 Edith rolls the pasta out into long sheets before using a second tool to cut it into individual pieces. (Photo/KCAW/Katherine Rose)

She cuts it into long, thin fettuccine strips. She’s set aside a small saucepan full of water, just enough to cover the noodles.  It comes to a boil. You can dry the pasta. But Edith would rather not.

“I’m all about instant gratification so we’re going to go ahead and cook this now,” she says.

It only takes a few minutes to cook fresh pasta. But it took Edith a lot longer to realize that cooking would be such an integral part of her life.

“I was kind of in this limbo moment where I was like, ‘Do I go back to banking?’ which I had been doing for six years. Or do I try something crazy? So I went for the crazy,” Edith says. “I drove around St. Louis, Missouri and found a culinary school. Pulled up in the parking lot and I was enrolled in an hour and a half.”

“He was a mad scientist,” Edith says and smiles. “He was everything you could ever think an Italian chef would be. Loud and proud. The passion that oozed out of him when it came to his food was nothing short of a miracle.” 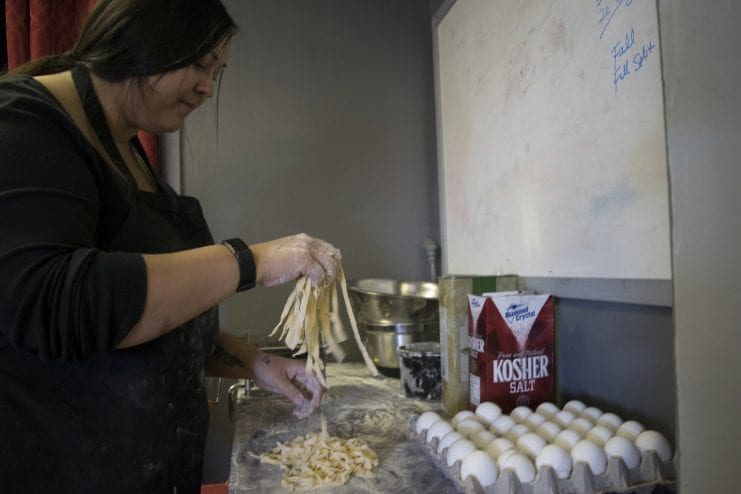 Edith tosses the pasta with a bit of flour before throwing it into a small pan of boiling water. (Photo/KCAW/Katherine Rose)

And Edith took some of that passion with her when she became a chef.

“I really saw what food could be. When a farmer walks into your door and hands you a product they made with their bare hands, and put their love into. And you shake their hands, and make that transaction, you’re agreeing to use that food and do it justice.”

After a minute, she pulls the fettuccine from saucepan and tosses it with a reduced mix of olive oil, white wine, chopped olives.

She tops it with  a little fresh local basil cut into thin strips. And pours the starchy goodness into a bowl for me to try. It’s incredible, refreshing even, and the olives really pop in contrast with the rich pasta. It ain’t noodles and butter. It’s better. 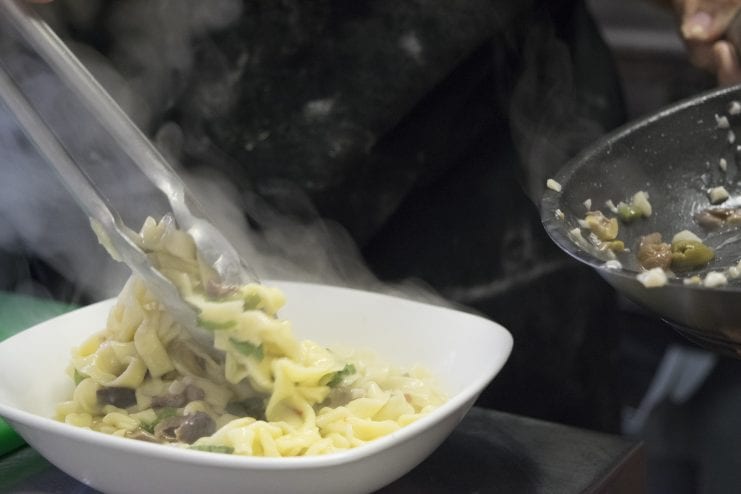 1.) Make a well in the center of two cups of flour in a bowl.

2.) Add olive oil, salt and two of the four eggs to the center of the well.

3.) Gently mix in the eggs and oil, gradually drawing in flour with each stroke.

4.) Knead the pasta dough gently for a few minutes. It should be slightly bouncy and sticky. If the mix is too dry add another egg or two. If it becomes too sticky to knead, add a touch more flour.

5.) Let the dough rest for 30 minutes. Then flatten out a baseball sized handful on a floured surface.

6.) With your pasta roller at the highest setting, slowly roll the dough through. Do this several times, gradually adjusting the setting to be thinner and thinner until you’ve achieved the desired thickness. (If you don’t have a pasta roller, a rolling pin should do the trick!)

7.) Use a pasta cutting tool for thin noodles like fettuccine. For wider pasta, you can use a pizza cutter.

The pasta can be dried or cooked fresh.