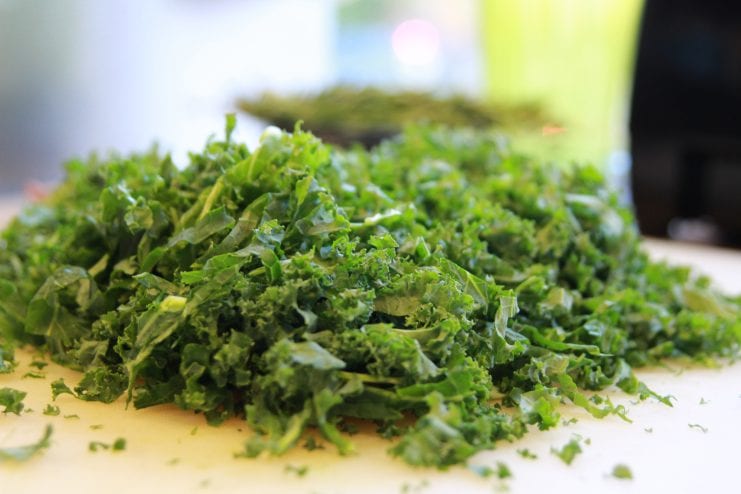 A bunch of the green stuff, before it gets a very well-deserved massage. (Photo/KCAW/Katherine Rose)

I’m standing with Renee Trafton in her restaurant kitchen, industrial refrigerators and other appliances humming in the background, as she rips kale from its stalk.

Renee has worked in two famed seafood restaurants in New York City. But when I asked her what she wanted to cook for Sitka Platters…she said kale salad. And I wondered, “Why kale salad?”

“Kale grows really well in Sitka,” Renee says. “It doesn’t get that cold so you’ll have these enormous kale plants. Kale in December will be kind of tough. But, if you massage it, it’ll still be good.”

Kale isn’t hard to come by in Sitka. Whether you’re growing or buying it, it’s pretty affordable. But Renee has a secret for softening the chewy fibers into something bright and refreshing.

“If you want it to be delicious you need to really work with it,” Renee says as she chops the kale into really tiny, thin pieces. And then she gives the greens the royal treatment…she massages it.

“It bruises and breaks down the cell walls which makes it more tender,” she explains.

The big, forest green pile shrinks as she kneads and squeezes it until it breaks down. She balances the kale with a rosemary vinaigrette dressing. A shallot. Sugar, apple cider, fresh rosemary and oil.

“I take a lot of pleasure in eating myself,” Renee says. “If it’s well-balanced you can eat the whole plate, you don’t have to take a nap afterwards.” 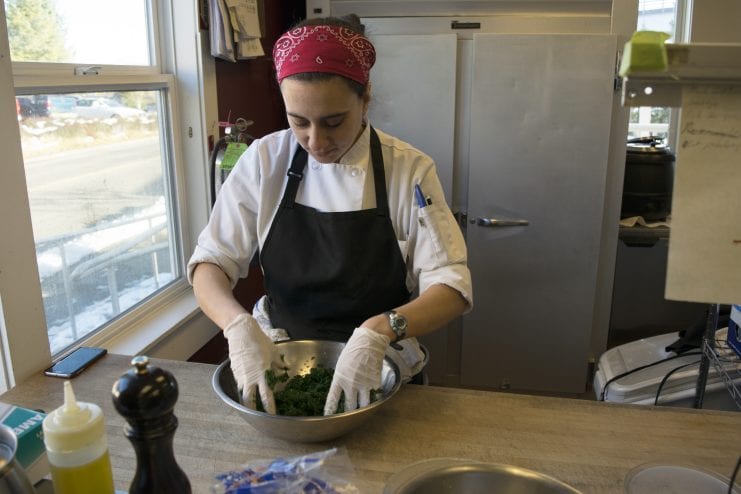 Renee Trafton breaks down kale by giving it a massage. (Photo/KCAW/Katherine Rose)

Renee got into cooking when she was at Oberlin College. She lived in a co-op, and once a week would cook for all 110 of her housemates.

“I super loved it because it was like a dinner party for all of my friends once a week,” she says. “It was the thing I enjoyed the most. In my margins in my biology class I’d have my notes for my dinner next week.”

But it was in New York City where she worked as a line cook that she learned the importance of taste and, with a bit of trial and error, how to balance the flavors in a dish.

“It’s a habit to cultivate to say, what is this missing, what can i do? When you’re flavoring something you want it to be just so and have this particular effect on a person. I think that’s the cool thing about fine dining is that you want to evoke some kind of feeling in the eater.”

Renee says while she doesn’t do fine dining at her restaurant, she still uses what she learned to try to create an experience.

“I still want to evoke certain feelings in whoever is eating my food. I do put a lot of care and mindfulness into how it feels, both in the mouth and how you’re going to feel afterwards. Like this kale salad. You should feel pretty healthy, strong, like want to do stuff afterwards.”