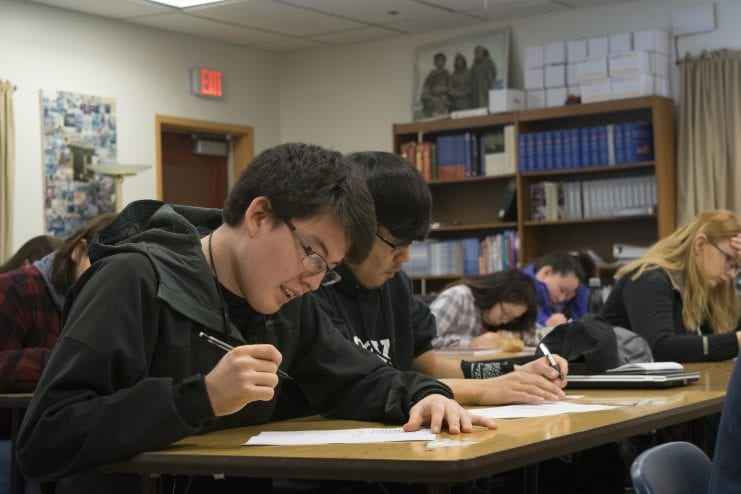 Think today’s teenagers are on their phones, not plugging into the real world? Well, not so fast. Students at Mt. Edgecumbe High School are replicating a recent study, attempting to determine how the presence of a cell phone in a classroom affects the way we think. KCAW’s Katherine Rose reports.

There are plenty of distractions in a high school classroom. The intercom, the talkative classmates, that kid crinkling the bag of Cheetos beneath his desk. But perhaps the biggest distraction of all can be found in the pocket of nearly every student.

Cell phones. Students at Mt. Edgecumbe High School have noticed. And right now, junior Muriel Reid and senior Wolf Star Duran are collecting their classmates phones in a cardboard box so they can conduct an experiment.

“Put your phone in the box. We’ll give it to you later,” Reid says.

They’re testing to see if merely the presence of cell phones in the room affects cognitive ability. They were inspired by a study they read in their field research class. Reid says in that study, which was conducted at by researchers at the University of Texas- Austin, participants were instructed to take a test, some with their phones nearby, and some without.

“Students were able to have their phones on the desk, in their backpack and out of the room I believe and the differences in their test scores relating to those,” Reid says.

The results?  After testing 800 people, the participants fared better on the computer generated tests when their phones were completely out of the room. When they were asked to place their phones in their bags or on their desks during the test, the scores suffered.

“I brought up the article that I’d found to kids just to talk to them about the use of their phones. Like let’s all be reflective about the use of our device and how it’s making us think, maybe differently. And then I had kids say, ‘Well we should replicate that study,” says science teacher Chohla Moll. She didn’t plan to include this experiment as a part of her curriculum. But her students took such interest. And they were adamant about one thing when it came to the cognitive tests. Pencil and paper only.

And they took it a step further.

“I come back over to them, and I said, ‘What are you doing?’” Moll recalls. “‘We’re writing our own cognitive test, Mrs. Moll.'”

Now, in several classrooms, students are taking the cognitive tests Molls’ students wrote. Some students think the presence or absence of their cell phones won’t make a difference. MEHS is a 1-1 school, which means every student has a laptop. They’re used to performing well academically while simultaneously using technology. But Reid and Duran think cell phones have a negative impact on a student’s attention.

“I feel like laptops in general are more of a work thing,” Reid says.
“Computers are less of a phone,” Duran continues. “You can’t have an instagram or a snapchat on your computer. You can’t get text messages. You can, but it won’t beep or buzz, you know, and bring your attention to your phone.”

They’ll go into classrooms again in a couple of days to conduct a second round of testing. Then they’ll compare the results. They think they’ll find data that’s comparable to the study they read. But Moll says it’s okay if they don’t.

“And then my students are like ‘well what if there isn’t?’ And I said ‘Well that’s science!’ It’s okay no matter how it turns out, that’s just the result. I think it’s going to be a lesson for all of us in the end.”

A lesson that might be easier to learn if we put our phones away first.