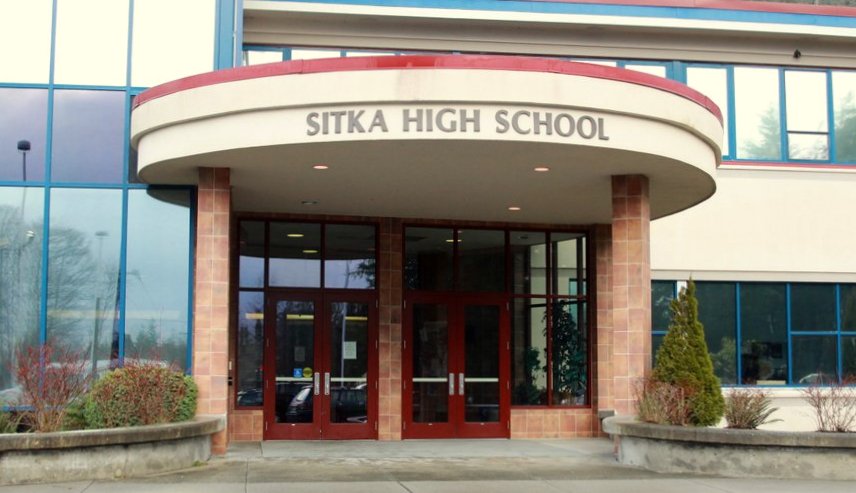 Four-day school weeks weren’t feasible in the elementary grades, according to Superintendent Mary Wegner. But they might fit at Sitka High. “It’s a trend in education,” she said. (KCAW photo)

The Sitka School District is having an unprecedented budget discussion, as it looks to the city to help close a $2.3 million dollar spending gap next year.

The School Board and the Assembly met in a special meeting Thursday night (3-8-18) to crunch numbers, and to consider extreme measures — like going to 4-day school weeks — to save money.

The next Sitka School Board budget hearing will be 6:30 p.m. Wednesday, March 21 — a live call-in event on Raven Radio. Look for more information in the near future on our Facebook page, and on our website kcaw.org.

Nothing was decided at the special meeting meeting, but it was a chance to speak out loud ideas that have not really been discussed before. Like layoffs.

At a budget work session earlier in the week, the school board rolled out the prospect of staff reductions — two teachers through retirement, and five by layoff.

The assembly on Thursday didn’t seem to relish the idea. Neither did Tim Pike, the president of the teacher’s union.

“You can tell that behind me there are a lot of teachers in the room. And there’s a lot of panic in the room because we haven’t been to this point before.”

Dropping teachers seems an obvious way to tighten up the budget, but Sitka has long resisted it. Pike — a parent of four himself — explained why small class sizes, or “pupil-to-teacher” ratios have been important to the community.

“There’s only one opportunity for each of our students every year, in whatever class they’re in. And the education that we give them at that point determines their outcome.”

Short of layoffs, the district could also divert the approximately $430,000 the city contributes in “non-instructional” funding, and pay instead for teaching. This is money the district uses to help keep the pool and the Performing Arts Center (PAC) open, to support student travel, and to subsidize Community Schools.

School board president Jenn McNichol observed that these functions and facilities were de facto part of Sitka’s parks and recreation program. She didn’t want the blame for cutting them to fall solely on the schools.

“If the suggestion to make up for some of our budgetary woes is to shift money from non-instructional to instructional, well perhaps we’ll have to do that. But it needs to be made plain that it is being suggested by all, that we close the pool, that we shut down Community Schools, that we shutter the PAC, that our students no longer have the option to travel — or maybe it’s only the kids whose parents can afford to buy them a ticket that get to travel for activities.”

Two of the teacher layoffs would come in kindergarten, which would revert to a half-day schedule.
Elsewhere in the district, there’s the possibility of moving to four-day-a-week instruction. According to Superintendent Mary Wegner, teachers prefer fewer school days to larger classes.

“It’s kind of a trend of what districts are looking at. I will say that our teachers are concerned about providing a quality education to every student. As you increase the class numbers, the opportunity for doing that is limited, which is why they were probably looking for some creative solutions.”

Wegner said that cutting back school days at the elementary level wasn’t an attractive idea. In high school, though, there was a stronger argument for devoting a day to office hours and other interaction with teachers outside of traditional class.

The school district did present the assembly with three budget scenarios that significantly pared down the projected deficit — but they all included some funding assumptions: A $100 per-pupil increase in the state’s Base Student Allocation (or BSA, in House Bill 339) which would send another $270,000 into the district, and some increase from the City of Sitka, to offset the $430,000 in “non-instructional” expenses that may or may not get diverted into instruction.

Neither is a sure thing. Assembly member Steven Eisenbeisz did not want residents to think that Sitka could ease the school district’s budget, without creating pain elsewhere for the community.

Assembly member Bob Potrzuski didn’t want to see cuts to the city budget anywhere, to fund education. That was the responsibility of Sitkans, who in 2016 voted down a 2-mil property tax increase that would have generated $4 million by now. Had it passed, Potrzuski said, “We wouldn’t even be here now.”

“We love kids, we love Sitka Schools, we love Sitka. The folks that we have to talk to aren’t in this room, because I’m pretty sure that most of the people who are here that could vote, they knew what the ramifications were for not voting for that (the 2-mil increase). Something’s gotta go, and maybe it is those non-instructional things. That may be the outcome of this. But I’m not willing — and I don’t know if anyone else on the assembly is — I’m not willing to put this on the backs of Sitka employees.”

But school board member Cass Pook wondered if the assembly really had gone deep enough: Had they needlessly backfilled retirements? Had they found “wiggle room” on a par with the school district, which found nearly a half-million in savings three years ago?

With 16 years under her belt — the longest-serving public official in the room — Pook was clearly unhappy that the district was being forced to consider layoffs.

“It’s sickening, this year’s budget… Because we’ve done everything that we possibly can to save money without cutting people. And this year we’re cutting people — seven. Maybe up to 14 depending on what the legislature does.”