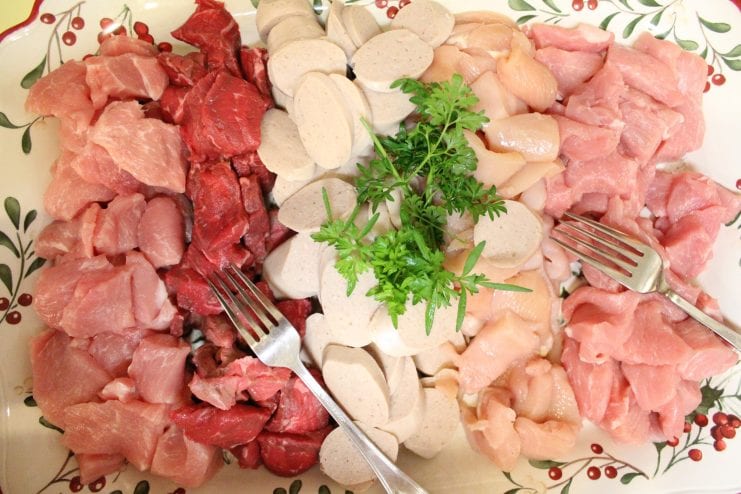 Chicken, beef and sausage, ready to be cooked atop a tiny raclette oven. (Photo/Nina Vizcarrondo)

If you’re a cheese fiend like me, try to find a friend from Switzerland. Luckily, I met Jeannette Farah who invited my family over for a traditional Swiss dinner called Raclette. Raclette is like fondue in reverse. Instead of lightly dipping food into a pot of warm cheese, you drench entire plates of food with melted goodness.

“We Swiss people eat a lot of cheese” Jeanette says. “It’s good to share my little bit of Switzerland with somebody else. Because I like to try new things and I think for a while I always thought oh, so boring. Italians have all this fabulous food, or French people, or Mexicans. And Swiss? It’s really kind of just melted cheese and chocolate.”

The word raclette comes from the word ‘racler’, meaning to scrape in French. “Raclette has been around since the middle ages, when Switzerland was formed,” Jeanette says. Sheepherders in the Swiss Alps would melt big rounds of cheese by the campfire and scrape off the creamy top. “It’s not like the form we have now.”

Walking into Jeannette’s dining room, everything is elegantly decorated in red. The Swiss flag is red with a white cross and it adorns everything from the glasses to the napkins. Dark wooden baskets on each side of the table hold big red and white pouches tied with red lace. They’re full of steamed potatoes, keeping them warm in preparation for the main event. And in the very center, there is a tiny oven, a Raclette, for grilling meat and melting creamy cheese to drizzle over boiled potatoes. 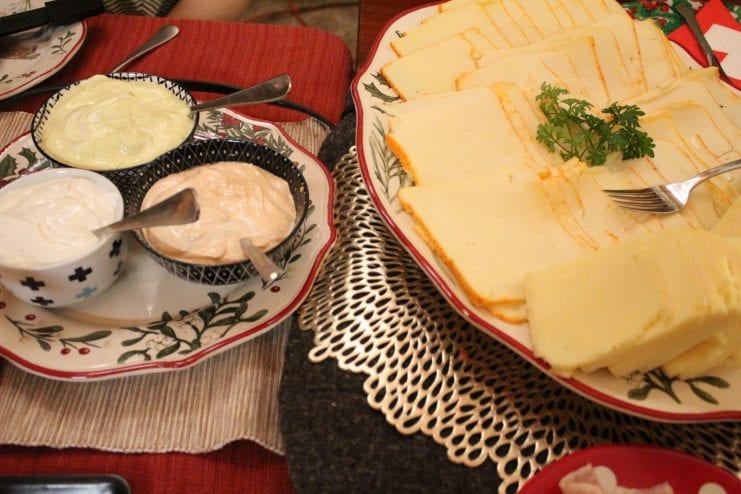 “In Sitka, it’s hard to find good Swiss style cheese, but you can find high fat cheese like Muenster cheese,” Jeanette says. She says you can order traditional raclette cheese online, but shipping it to Sitka can be pricey. 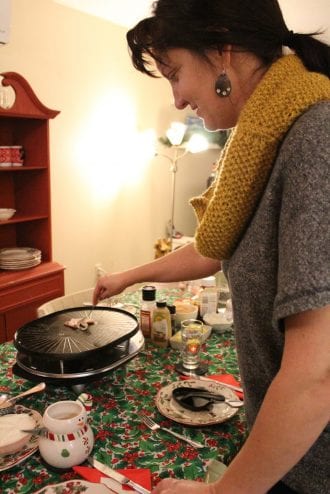 Jeanette Farah demonstrates use of the Raclette oven. (Photo/Nina Vizcarrondo)

After choosing our meat, we place it on top of the searing hot grill. While it’s cooking, we fill small personal trays with cheese and maybe a few pearl onions and pickles. Then we slide the heaping trays in the slot beneath the grill. In a few minutes, the cheese melts into a bubbly, caramelized sauce.

“It’s fun. It’s interactive. Everyone has to cook themselves.” Jeannette says this is the ideal meal to invite people over for dinner without the stress. It’s a cozy way to spend a chilly winter night. Meat sizzles in the background as everyone chatters with occasional laughs.

“I’m not a very confident cook,” Jeanette says. “I like to have people over to entertain. But cooking is really stressful for me. So raclette is like the perfect dish for me.”