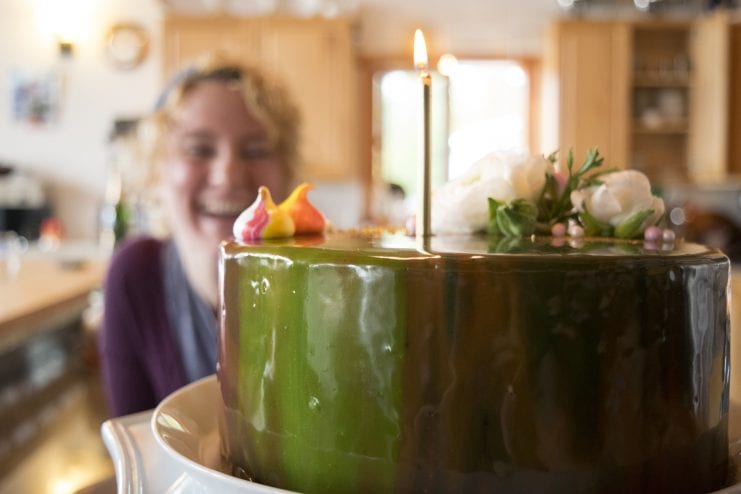 “It’s a good thing I bought a lot of butter.” Shelby Williams giggles and hums as she whizzes around the kitchen, whipping up her favorite buttercream.

“I’ve seen all kinds of recipes where you just throw some stuff in a mixer,” Shelby says. “I would say that’s not a real buttercream. That’s more of a frosting.”

She’s playful while she works, but make no mistake. She’s a trained pastry chef, and the language used to describe her craft is important.

“A buttercream is a buttercream. An icing is something that sets and hardens, and a frosting?” she laughs. “I had a professor who, any time someone would say frosting, he would correct them and say ‘Don’t use the f-word in this kitchen!’ It was a taboo thing. I don’t have as strong of feelings as he did. Just because something’s easy doesn’t mean it’s wrong.” 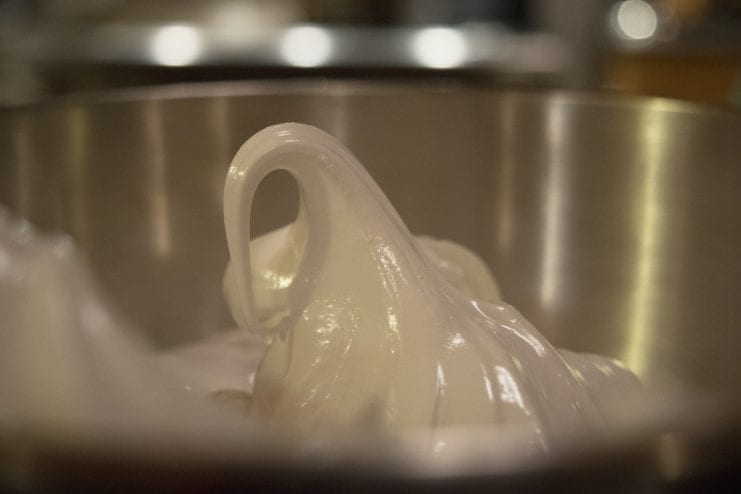 After stiff peaks form in the meringue, butter and chocolate are added to make a dark chocolate buttercream. (Photo/KCAW/Katherine Rose)

Shelby says there are a few different kinds of buttercream. French, American, English – the list goes on, each requiring its own careful technique. Today, she’s making a dark chocolate Swiss buttercream that will coat a moist, dark chocolate red wine cake.

Her recipe is in ratios, handwritten on a tiny piece of paper. And she’s making a big batch. Buttercream isn’t just sugar and butter. You have to make a meringue first. She separates twenty-five egg whites. She’s used to adapting recipes, whether she’s baking for hundreds or a few close friends.

“I like pushing the boundaries,” Shelby says. “I wouldn’t say that I stick to one tradition of baking. I like to get things down so that I really love them. There are certain recipes that I’ve honed in on. I’ve learned to make them in huge batches and tiny batches. I’ve learned to make things in ways that they work out just right for me. Like a certain pie pan that I’m using or a certain silicon mold that I’m using and they just plop out for me in perfect little cakes.” 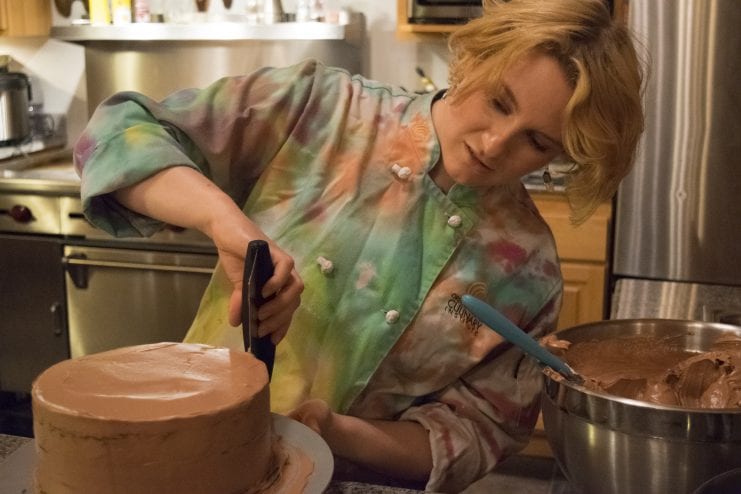 She slowly heats up the egg whites in a double boiler and pours in the sugar. When the sugar is dissolved she whips that mixture into a meringue. Then she adds the butter. Then the cooled chocolate.

“It’s the easiest buttercream I’ve ever worked with,” she says. “I don’t know what it is, I think it’s the balance of butter and chocolate that makes it still so soft and fluffy at room temperature. I don’t know. It’s magic, it’s a winner.”

Shelby may have trained at pastry school, but she first learned the art of baking at home.

“Actually in my household my dad made all the food,” she says. “In high school when I was feeling lost and didn’t know what I wanted to do with my life, I was like, what do I actually look forward to? Baking with my dad.”

Her dad bakes everything. Pies, dinner rolls, sourdough. He loves bacon and appreciates fine food, and he’s taught her a lot. But he has one recipe that he’s kept to himself. 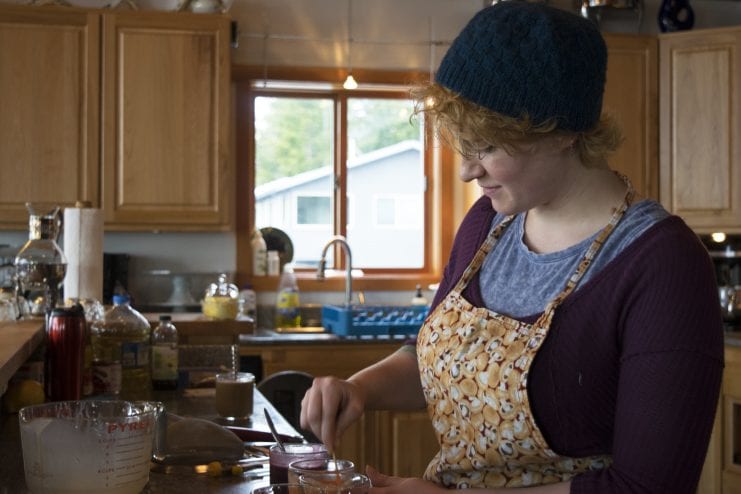 Using food dye, white chocolate and cornstarch, Shelby mixes four colors of mirror glaze that will be poured on top of the cake, creating a marbled effect. (Photo/KCAW/Katherine Rose)

“He makes this amazing very tall cheesecake that he got from an old friend of his that passed away,” Shelby says. “So it’s this cherished thing. And of course i don’t have it. It’s a secret.”

So she found her own recipe- and she’s made hundreds of cheesecakes. But she still looks to her dad’s as the standard.

“Every once in a while I get a really tall cheesecake turnout,” she says. “I’d get a 3 or 4 inch tall cheesecake. I think that’s a good standard for if you know if a cheesecake is good. If it’s tall and big and fluffy, almost like a big sponge.”

So whether it’s cheesecake or buttercream, the correct terminology in Shelby Williams’ kitchen is “indescribably delicious.” 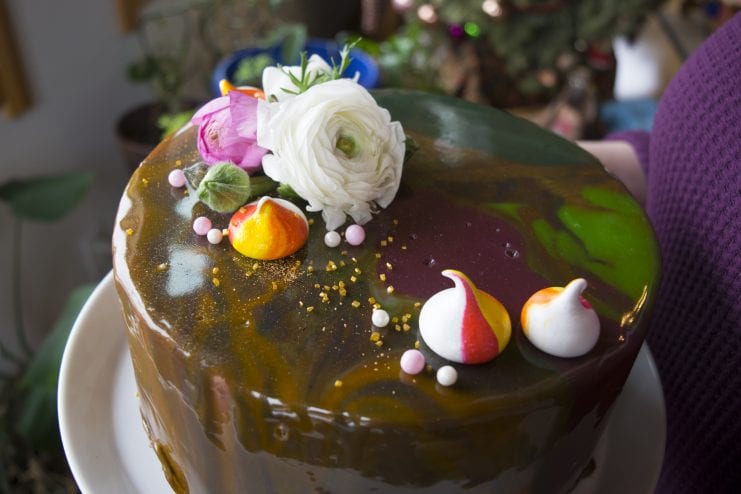 The final product, a birthday cake with a thick layer of Shelby’s buttercream, coated in a multi-colored mirror glaze and gold dust. (Photo/KCAW/Katherine Rose)