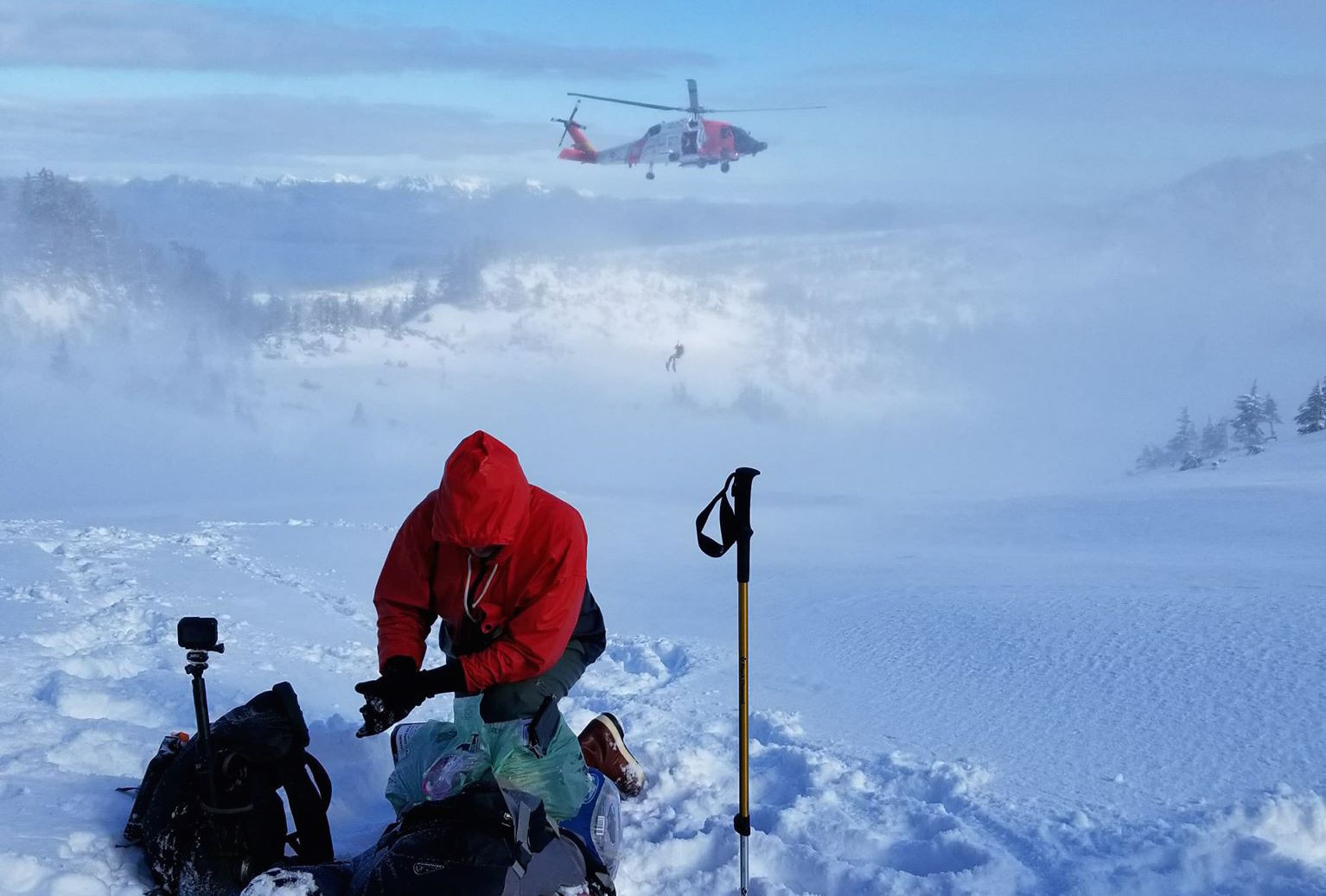 Five hikers were rescued this weekend after an attempt to ascend Mt. Edgecumbe in Sitka didn’t go as planned. But the unexpected obstacles they faced were met with quick decisions a touch of good humor. Though they didn’t make it to the top of the volcano, they made it down safely, with their inflatable unicorn rafts intact. KCAW’s Katherine Rose reports.

When Josh Joseph and Roman Sorokin began planning a trip up Mt. Edgecumbe, they wanted it to be magical. Literally, they wanted unicorns.

“He tells me, “I was gonna ride this unicorn into the volcano,’ and he shows me this giant unicorn that he ordered and I was blown away,” Joseph said.

They wanted to ascend the dormant volcano and celebrate at the end with a makeshift disco party.

“We decided we could light up the volcano with a strobe light and I could get some lasers and a disco ball,” Joseph said. “We were gonna light the volcano up and make it look like a rave, because it all sounded really doable. It didn’t weigh very much to get that stuff up there.”

Their friends Stephanie Kruse, Claire Turner and Elizabeth Borneman decided to join. For Kruse, her last chance to hike the volcano.

“This is gonna be my last spring in Sitka. When I heard these guys were gonna go hike Edgecumbe I was like well I can’t pass up the opportunity to hike Edgecumbe,” Kruse said. “Then add in a dance rave party at the top of the mountain and I was sold.”

But the friends didn’t just talk fantasy in their preparation. Sorokin said they were serious about their planning.

“We really took the time to do our research. We looked up how to build a snow cave,” Sorokin said. “Tried to find as many contingency plans as we could- if the plan fails, here’s our plan A, plan B, plan C.”

Even with planning, things can go wrong, and as the five friends began their way up Mt. Edgecumbe on Saturday morning, the sky seemed clear. But when climbed higher and higher, visibility got worse. 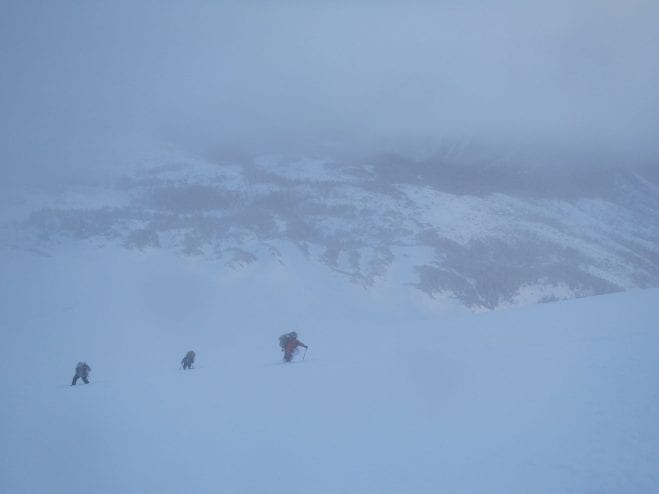 “By the time we hit the last post we were already sucked way in, and the visibility was pretty bad and it started blowing pretty hard,” Sorokin said. “Not too long after that snow started falling. We saw the pillar of rocks that is up at the top past the last post. We made the decision to lean to the left, thinking we’d end up in the crater. Somehow ended up doing the opposite, leaning to the right.”

They mistakenly began to descend down the Shelikof side of Mt. Edgecumbe. At one point, Kruse fell, and her pack was pulling her. She dropped it. Another member of the team tried to go after the backpack, but it was lost. The group then decided to burrow into the side of the volcano for the night, each taking turns digging out an ice cave.

“I went to the bathroom right before,” Joseph said. “It sounded like not everybody did. There was no getting out of the cave. You definitely had to put shoes on. That slope was way too steep. Any movement you risk knocking down the ceiling.”

With limited movement, they hunkered down in the donut shaped hole. Kruse’s friends gave her extra clothes and gear to keep warm, and they had one other amenity in their ice cave that was unexpected.

“We had cell phone service the entire time in our snow cave,” Kruse said, laughing. “I think we all sent out ‘Hey, we’re all snug in our snow cave’ messages. Weather conditions aren’t what we hoped for so we just tuckered in for the night.” 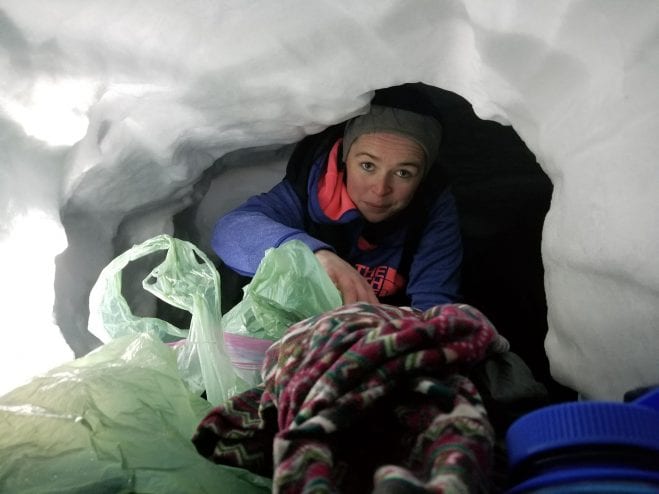 Hiker Claire Turner hunkers down in the snow cave for the night. (Photo/Josh Joseph)

They even played one of the rave songs they’d intended to play in celebration of the summit- Darude’s “Sandstorm.” Fitting, because they were waiting out a snowstorm. They spent the night there, Sorokin waking up every two hours to make sure the ventilation holes weren’t plugged with snow.

“Then I check the forecast at 5 and I see snowflake in my app. And I’m going, oh my gosh. I don’t think we’re gonna take another one of these.”

Sorokin called the fire department and the group slowly began trying to make their way up the steep slope, back to the ridge line to find the trail.

“Dave Miller actually drove out to the bridge to give me an update on what Edgecumbe looked like. He said, ‘Well I can see it town-side alright’ but at that time we had no visibility.”

They came back to the cave to regroup and adjust their gear and decided to descend the mountain from their location. Around 11:30, a rescue team from Air Station Sitka arrived, and hoisted them to safety.

“Josh and I are already talking about a comeback. You learn every single time. You become wiser, smarter. You’re able to reflect on your fears and concerns,” he said. “I think Mother Nature was testing us to see if we were worthy of our next adventure.” 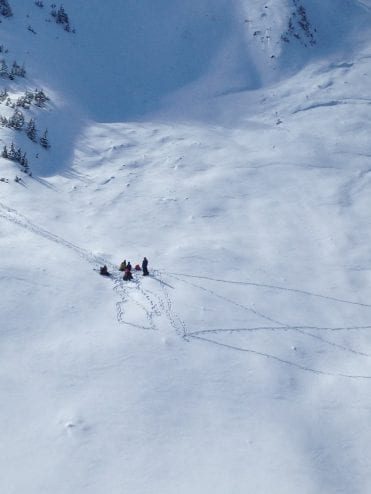 View from the USCG Jayhawk helicopter as the five friends wait to be picked up. (Photo/Keith Williams)