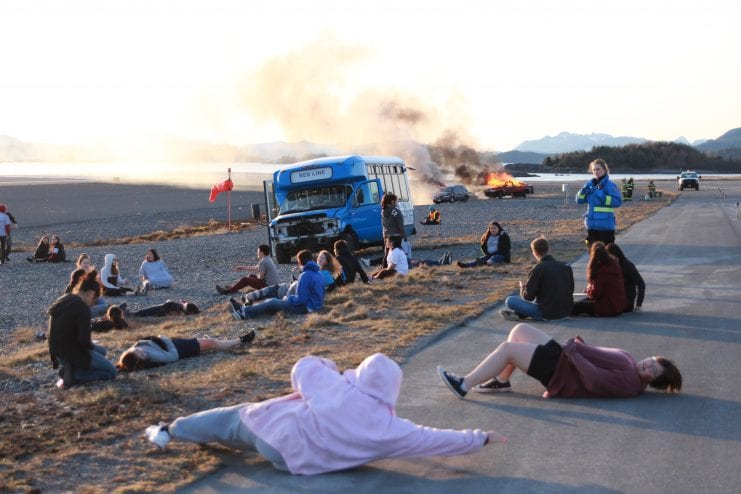 Sitka’s Rocky Gutierrez Airport ran a disaster drill Wednesday night (04-04-18). Simulating a plane crash on land and on water, various agencies practiced responding to a mass casualty event. The drill is a federal requirement and takes place every three years. Citizens were asked to remain clear of the airport grounds to aid in the reality of those participating in the drill.

The drill began after the evening flight departs, when the skies were quiet, and unfolded on airport property and waters northwest of Sitka’s runway.

Steve Bell, Airport Manager with the state Department of Transportation, said, “It’s a mass casualty drill of a large aircraft crashing.” Bell estimated over 100 people participated in the drill. Forty of those were Mt. Edgecumbe High School students, pretending to be passengers on a plane that has crashed over land and sea and in need of immediate attention.

“The Fire Department – the EMS group – they put moulage on [the MEHS students] to show cuts, burns, bruising, anything that someone would get from a plane crash,” Bell said.

Some of the students were stationed on the runway, while others will be in a small passenger van to simulate a piece of fuselage. Sitka EMS and the Fire Department triaged the mock patients, transporting them to both of Sitka’s hospital and designated collection points.

The drill also included a fire component to simulate a burning plane. Two vehicles were lit on fire, so firefighters could practice putting them out. To simulate a crash on the water, 45 foam boards were placed in the water for first responders will collect in boats.

The Sitka Police Department, Sitka Search and Rescue, and the U.S. Coast Guard were also involved.

Organizers have been meeting since January to coordinate this triennial drill. The scenario, which is an FAA requirement, is slightly different every three years to keep responders skills fresh.

“It definitely takes a lot of time to actually do the drill. But if something ever happened, we would be ready,” Bell said. “A plane crash would be one of the most devastating things that could happen to our community . It’s a lot of people that could be on that plane and a lot of family members. It would be hard on this town, so we want to be prepared for something like this to happen.”

The road closest to Rocky Gutierrez Airport was blocked off for several hours Wednesday night after 7 p.m.