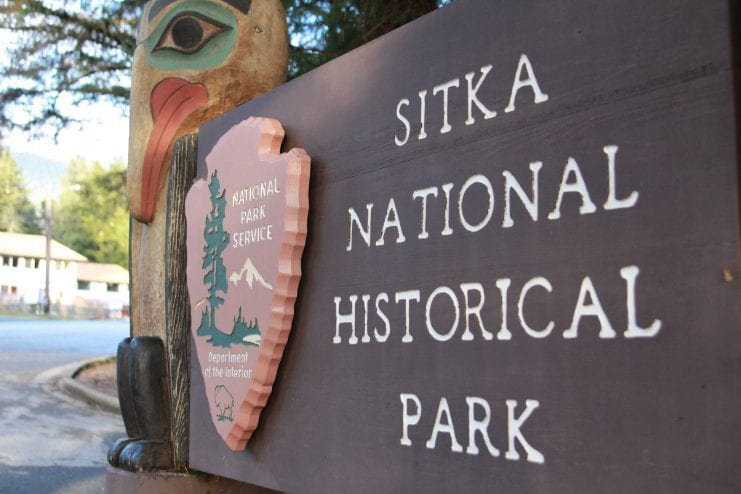 After a year of negotiations, Sitka Tribe of Alaska has entered into partnership with the National Parks Service. The first compacting agreement of its kind in U.S. history, Sitka Tribe would begin co-management of historical interpretation at the park. KCAW’s Katherine Rose reports.

Sitka Tribe of Alaska is partnering with the National Parks Service to manage most of the interpretation programs at Sitka National Historical Park. But Tribal Council chairwoman KathyHope Erickson wonders if “interpretation” is the right word.

“I’ve been joking with a lot of people about it, ‘Why do we call it interpretation when we’re telling our own story?’ I was talking with Lisa today and we kind of came up with the thought that we would like to have that unit named a Tlingit name,” Erickson says. “We’ll consult with our cultural resources committee and see what we can come up with.”

Lisa is Lisa Gassman, general manager with Sitka Tribe of Alaska. They’re both visibly excited to be more involved with how Sitka’s history is shared, especially in a place so important to Tlingit people. Sitka National Historical Park is home to the Tlingit fort site Shís’gi Noow and battleground, where the Kiks.adi Tlingit clashed with the Russian-led forces in 1804. The park also maintains the Russian Bishop’s House as a museum, one of the oldest remaining structures of Russian America. Erickson says the tribe would lead interpretation programs in that building as well.

Our tribal people have been a big part not only the park but also the orthodox church and life with the bishop. We’ll be able to tell it from our perspective.

This compact agreement is historic, the first in the nation in which a tribe will lead interpretation and education services for a national park. It is also precedent setting, though the mechanisms for tribal governments to pursue park management have been in place since the 1990s.

Key to this collaboration is the Indian Self-Determination and Education Assistance Act. Amended in 1994, the act now allows tribal governments to get involved with management of federal lands. If a tribe has a special historic or cultural relationship with a national park, they can pursue an Annual Funding Agreement (AFA) to run projects and programs in that park. Sitka Tribe of Alaska general manager Lisa Gassman hopes STA’s move to pursue an annual funding agreement will inspire other tribes to do the same.

I think there have been barriers. Sitka Tribes being, to our knowledge the first that’s program based versus project based. We anticipate other tribes though seeing this success and wanting to start this in their area and their park as well.

Through their annual funding agreement, STA has filled some positions already.Former deputy director Tristan Guevin will lead operations through early next year, while Mark Sixbey will serve as an education specialist. They’ve also hired one full-time park ranger and one seasonal park ranger. They’re still looking to fill four seasonal ranger positions before training begins on April 23. The positions are open to all, though tribal citizens are preferred. And Gassman says the new rangers will have a new uniform too.

“There are going to be tribal uniforms versus national service uniforms,” Gassman says. “We’re still in the process of finalizing those before the first tourists come in.”

“It’ll be a nice surprise,” Erickson continues. “But one thing that for sure will be on it? The Tribal seal will be prominent on the uniform.”

The funding agreement will need to be renewed. STA begins negotiations for that this month. Erickson and Gassman both hope for even more collaboration between the tribe and the park.

“It’s the beginning of the realization of a dream,” Erickson says. “I know I have some huge dreams in my head that I can’t necessarily share yet. But keep your eyes open.”

Gassman continues, “I think this is just one step in many that the tribe hopes to take in co-management of Totem Park.”

But there is a waiting period before taking this first step. The Annual Funding Agreement is being reviewed by congress. Should no opposition arise within a 90 day period, it will take effect on May 7th of this year.