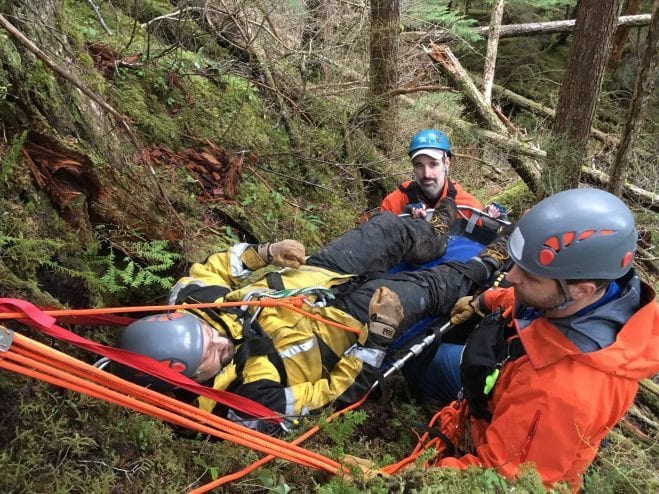 After months of extra training, Sitka Mountain Rescue passed the remaining portions of their re-accreditation test this weekend. This means they are once again a fully accredited mountain rescue team and can continue their work.

Sitka Mountain Rescue is a group of over 50 volunteers, who train year-round to find find and aid lost and injured hikers in the Sitka area. Formed in the 1960s, they’re part of the Mountain Rescue Association, an international group of mountain rescue teams. Groups are re-tested and accredited by MRA every five years.

Last year, the Sitka group went through the re-accreditation process. They passed most, but not all, of their skills tests. So they had to retest this year on the skills they didn’t pass. Team captain Ron Duvall says volunteers logged extra hours to ensure they were ready for steep angle and high angle scenarios.

“In addition to our normal hours, we spent hundreds of hours focusing on our initial patient contact, really making sure what we were doing was safe, addressing patient warming,” Duvall says. “Also practicing the systems that we put in place, going over them a certain number of times a session to make sure they’re safe and efficient.”

Over the weekend, four accreditors came to town-  two from Alaska Mountain Rescue in Anchorage and two from Juneau Mountain Rescue- to evaluate Sitka’s volunteers and play the parts of injured hikers, waiting to be assisted. Duvall says during the “steep angle” scenario, for example, their evaluator played a hiker with a dislocated ankle.

“And the subject played the part where at any little bump, would start screaming and yelling,” Duvall says. “Just to try to make it real world just as if we were responding to an actual patient with a dislocated ankle.”

Screaming and yelling aside, the accreditors must have been pleased with Sitka Mountain Rescue’s performance. The group will be recognized as a fully-accredited mountain rescue at the Mountain Rescue Association conference this spring.