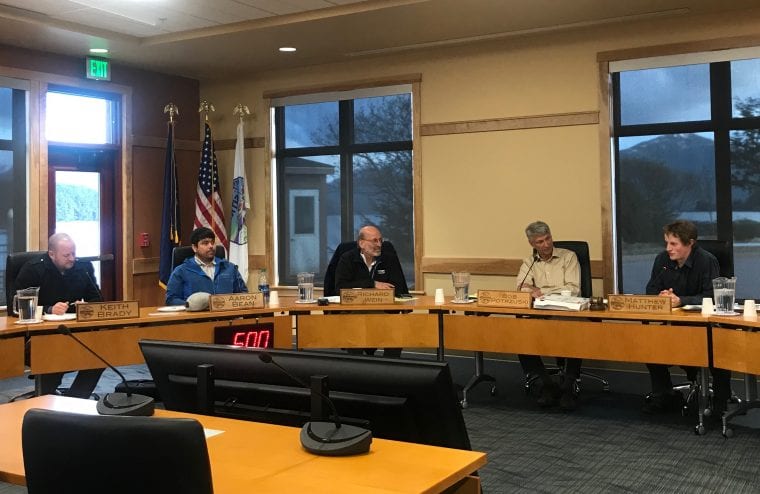 In his first evaluation by the Sitka Assembly, municipal administrator Keith Brady received a satisfactory review. The father-of-four and former Utah-based county commissioner took the helm at city hall in September.

When they walked back into Assembly Chambers an hour later, the Assembly did not provide a statement on what they discussed.

The Assembly then conducted Brady’s evaluation in public, as he requested. Each Assembly member took a turn weighing in on his performance.

In their remarks, several noted Brady’s team building at City Hall. Assembly members also commended him for tackling a steep learning curve in taking this position.

Ben Miyasato: I think you are doing a good job as an administrator. I think your family has done a great job of fitting in our community. I applaud you for that. It isn’t easy coming to an island, coming to a rain country, and being that outside.

Matthew Hunter: I have felt optimism and energy at City Hall that I haven’t felt for a little while. I think a large part of that is because of you. That’s one of your greatest successes: your ability to work with staff and energize staff.

Kevin Knox: One of the things I would like to hear more from in your voice, not only in our one-on-one conversations but publicly too. I think you have some great ideas.

Brady had no prior experience with municipal administration when he arrived in Sitka. While some Assembly members were willing to grade him on a curve for that reason, others were critical of his performance.

Assembly members Aaron Bean and Richard Wein both said to they wanted better one-on-one communication from Brady. They also disapproved of his decision to remove a controversial art exhibit from the William Stortz gallery earlier this month.

Richard Wein: You can easily be swayed, especially in a new position, especially in a position that is complex. You represent more of a floating bottle in the ocean which is subject to the tides and wind.

Aaron Bean: We could work on communication, even if it’s a simple one liners back to me.

Assembly member Bob Potrzuski also disagreed with Brady’s decision to remove the art show, but  recognized Brady did so because of public outcry aimed towards city staff.

Bob Potrzuski: What I found was a man who was cemented by his ideas. His idea was to protect his staff and to get city work done, even under significant pressure from “two of his bosses.” I didn’t agree with that decision, but the fact that you were willing to stand up for your staff that way…personally I was impressed.”

In the end, the Assembly found middle ground by unanimously voting to give Brady a satisfactory review. Assembly member Steven Eisenbesiz was absent.

Following the evaluation, Brady spoke with the press and said he’d give himself a grade of “B, definitely not an A. There’s always room to improve.” He added,”I think the constructive criticism that they gave me was perfectly fine and well-intentioned. I’ll take it and I’ll use it and I’ll make myself better.”

On the horizon, Brady said he and his staff are looking at land development and growing Sitka’s economy.

The Assembly then went behind closed doors to evaluate city attorney Brian Hanson, as has been done in the past with previous city attorneys. Coming out of executive session, the Assembly voted unanimously to gave Hanson a satisfactory review. They then directed Human Resources to execute Hanson’s contract as written, adjusting his salary to $140,000.