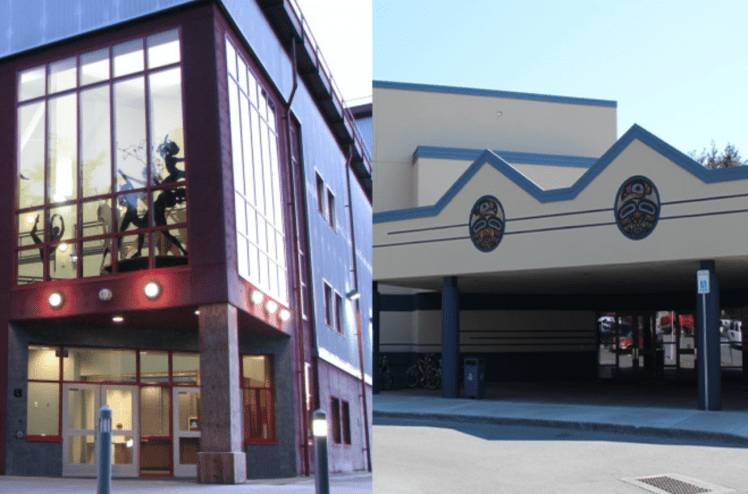 The Sitka School District will request an additional $200,000 from the city, $100,000 to save a full-time teaching position at Blatchley Middle School and $100,000 to help fund the Performing Arts Center. (Photos/KCAW)

The Sitka School District passed a budget for the fiscal year at a meeting Tuesday evening, maintaining three teaching positions, though one is still in jeopardy. The board is hopeful that the aid they need to save that position and keep other services in place will come for the city and state legislature. KCAW’s Katherine Rose reports.

After spending several hours peeling over the final budget recommended by Superintendent Mary Wegner, the Sitka School Board made a few small additional cuts, ultimately passing a budget of $22,205,712 for the 2019 fiscal year. As written, the budget depends on additional revenue from the city and state- funds the board still isn’t certain will come through.

Wegner thanked teachers, both tenured and non-tenured, for their patience over the past few months as the board sorted out the budget, which she said was in flux even in the hours leading up to the final meeting.

“In the midst of not knowing what’s happening and so much changing from January, until today,” Wegner said. “Even this afternoon things were in play. And you always put the kids first, and it’s appreciated.”

And things, even now, are still in play. House Bill 339, which would increase state funding by $30 per-student, is still being debated as the state legislature nears the end of session. This funding hike accounts for over $80,000 of the school district’s anticipated budget, but it’s uncertain whether or not it will pass.

“I did make some calls today to Juneau. And, pretty much, universally, I heard that they’re trying to wrap things up,” Wegner said. “We may hear something on education by Friday, was the date that was shared with me.”

They’re also hoping for a approximately $200,000 in revenue from the city: half to save a teaching position at Blatchley Middle School and half for operating  the Performing Arts Center. Where will this money come from? Tough to say, but next week the Assembly will take a final vote on a 2% bed tax increase and replacing the senior sales tax exemption with a rebate program. Either of these two measures could be the answer to the district’s funding requests.

Board member Cass Pook wondered if all this was enough of “an ask.” She made a motion to amend the budget to fund to the cap.

But Board President Jennifer McNichol said that after spending hours at assembly meetings, funding to the cap was unlikely.

“They have drawn a sustainability line in the sand that they are not willing to wipe out their reserves,” she said. “I don’t think there’s any chance that they would fund us to that level given the current situation at this moment. If there’s suddenly some wonderful bulk water business that takes off in the next few years, perhaps that’s a reality down the road.”

School board members also time to go over big budget items like the Sitka Community Schools – an after-school program that allows students and extracurricular groups access to school facilities. It costs $179,863 to operate every year. Board member Eric VanCise said while he saw the value of the program, he found it difficult to justify funding in the face of staff cuts.

“I just do not feel that at this point and time with what we’re facing, that we have the ability to continue that,” VanCise said.”The reason why, I try not to use the analogy, but there’s a teacher there. There’s at least one teacher.”

VanCise then made a motion to eliminate Community Schools from the budget. That motion failed, with only VanCise voting for it. The board then unanimously passed an amendment to look for other funding models for Community Schools in 2020.

One line item up for a cut was Discover Your Potential or DYP, a biannual event at Blatchley Middle School where students take non-academic classes taught by community members. Its budget is 10,000. Wegner’s budget eliminated it entirely. Pook made a motion Tuesday night for funding to be fully restored, but that was voted down.  Then board member Elias Erickson suggested restoring $5000 in funding, taking $2500 from technology and $2500 from supplies to make up the difference. That passed unanimously as well.

The board also looked internally for places to cut. They decided to reduce their travel budget by $5000, with Erickson voting against.

Wrapping up around 10 p.m. that night, the Sitka School Board will now submit their budget to the city assembly on April 30. The city has 30 days to review and respond. The last day to issue contracts for non-tenured teachers is May 15. After the city responds, the school district anticipates revisal of the budget on June 1.