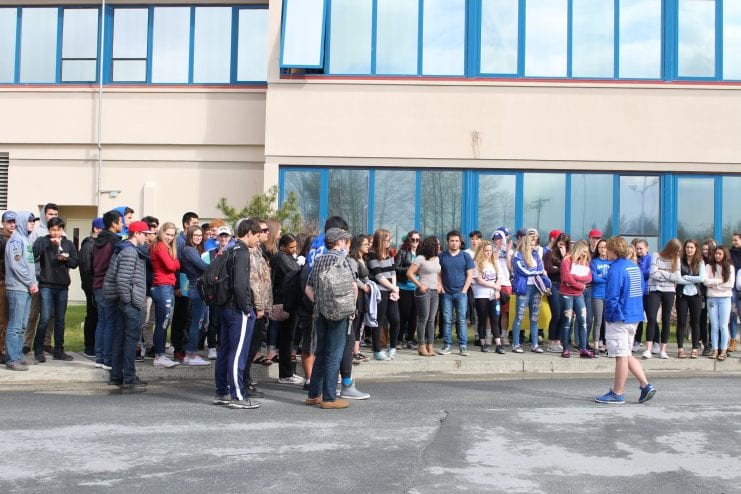 Two groups of Sitka High students marched out of school on Friday, both calling for safer schools but advocating for different solutions. And even though he’s not a fan of protests, senior Anders Marius wanted to create an opportunity for students with a different perspective on gun reform to have their voices heard. KCAW’s Katherine Rose reports.

When Anders Marius led around 70 of his classmates out of Sitka High calling for school safety and protection of 2nd amendment rights, he was standing across the parking lot from friends and teammates with a different view on how to keep schools safe.

“Joe and Ella and I are all on the debate team together. We were partners at meets. The things is we’re all buddies so the walkout was kind of one of our normal arguments just taken to a bigger scale, in a sense,” Marius said.

The plan to participate in the National Walkout on School Safety was first broached by juniors Joe Pate and Ella Lubin in the chambers of student council. Marius took issue with the partisan implications of the walkout being sponsored by an organization that represents the entire student body.

“We ultimately decided that it would be really, really hard to divorce the issue of gun control from the national walkout,” Marius said. “It’s linked heavily to gun control reforms. I know that they wanted to advocate for gun control, that’s really what they wanted. So we ultimately decided that that chamber wasn’t the right place. And I decided that if they were going to have a walkout, I disagreed enough that I would stage a counter walkout, if you will, or a protest looking for a different solution than they were proposing.”

Pate and Lubin were calling for further gun reform, rallying support specifically for House Bill 75, which would allow judges to prevent those they deem mentally unfit from purchasing a firearm. Opposed by the NRA, HB75 would also allow police to seize weapons from those individuals for a period of time. Marius doesn’t think gun reform is the answer, at least not on the local level.

“We don’t need to radically change anything about Sitka to make our school safer,” Marius said. “We could have more lockdown drills, mock evacuations. Copy what they did in Anchorage and have a live shooter situation where they have somebody firing blanks in the school building and we prepare for, not the inevitable, but a worse case scenario,” he continued. “We could have a solution where we protect our children and our rights in a sense.”

But protesting to protect these rights? Marius said it wasn’t ideal.

“I didn’t really want to actually stage a walkout,” Marius said. “I personally don’t like protesting in that fashion. But I felt as though if I didn’t have a platform for people to express their opinions besides the majority that would march with the gun control, it would send a message that Sitka High unanimously supports this idea.”

When the students walked out at 10 on Friday morning, Marius and Pate each gave speeches and each group observed a moment of silence. The groups didn’t engage with each other much, though at one point the group calling for gun reform began to chant “No more silence, no more violence,” while the 2nd amendment group chanted “Protect our children and our guns.” Marius’s group then played the national anthem, and chanted “USA.” One student held a sign that read, “Guns are fun.” When KCAW asked Marius about the sign, he reiterated that he wanted to give all students the opportunity to express their rights to free speech.

“If they don’t want gun control because they believe guns are fun, that’s their personal choice to say,” Marius said.  “Everyone has their own reasons for believing things. I like to think that I keep mine more logical.”

Amid the tension, Marius saw one point in common. “Everybody wants school to be safe. The protests diverged upon what the solution is to that.”